This was a packed session with 17 gamers (1 new), which meant 5 separate tables on the go - we had to reshuffle the room and put a fifth table out partway through the evening. There were 10 different games played, a new club record, 6 of which were new to the club. 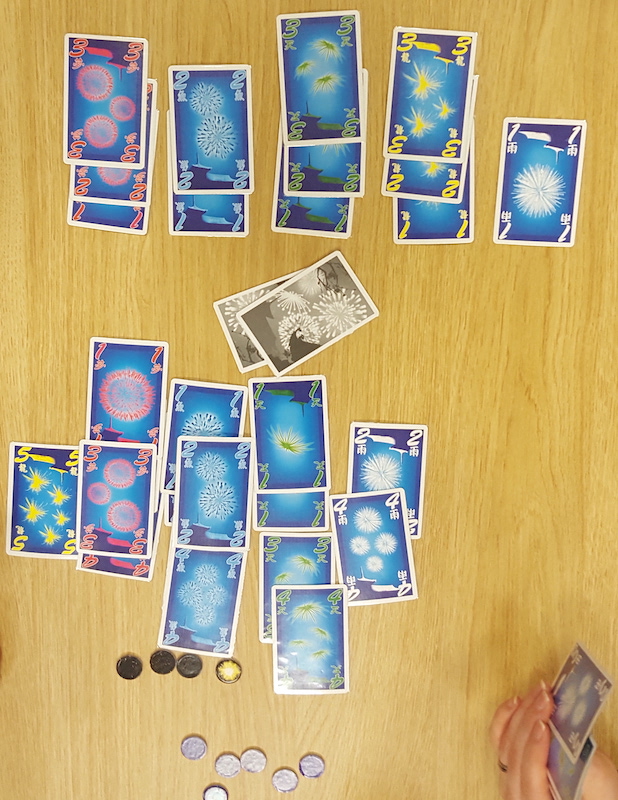 Let’s start with a quick review of the 4 previously played games. Hanabi was back for a third play, last seen in sessions 6 and 26, a nice opening co-operative game with players giving clues to enable plays of hidden cards in sequence to create a fireworks display. Long games selected included Flash Point: Fire Rescue, which was also back for a third time, previously seen in sessions 5 and 22. This is another co-operative game, with 2 plays on the night, trying to save civilians from burning buildings before the fire rages out of control and collapses the building around your brave firefighting team. It was a similar story with Lost Ruins of Arnak, 3 times out - see blogs 15 and 16. This game is a competitive explore and archaeological research game. It requires careful hand and resource management, and use of multiple routes to victory points to emerge as most successful adventurer on the newly rediscovered island. Scores were very close in this sessions 4-player game with Natasha M. edging ahead with 68 points, but Neil O. and Tom L. were on 66, and Kathy J. on 65 points. Excellent exploring all round! The final returning game The City, a nice opener or closing game was out for the eighth time, first seen in session 8 and it managed 2 plays before it was time to retire for the night. 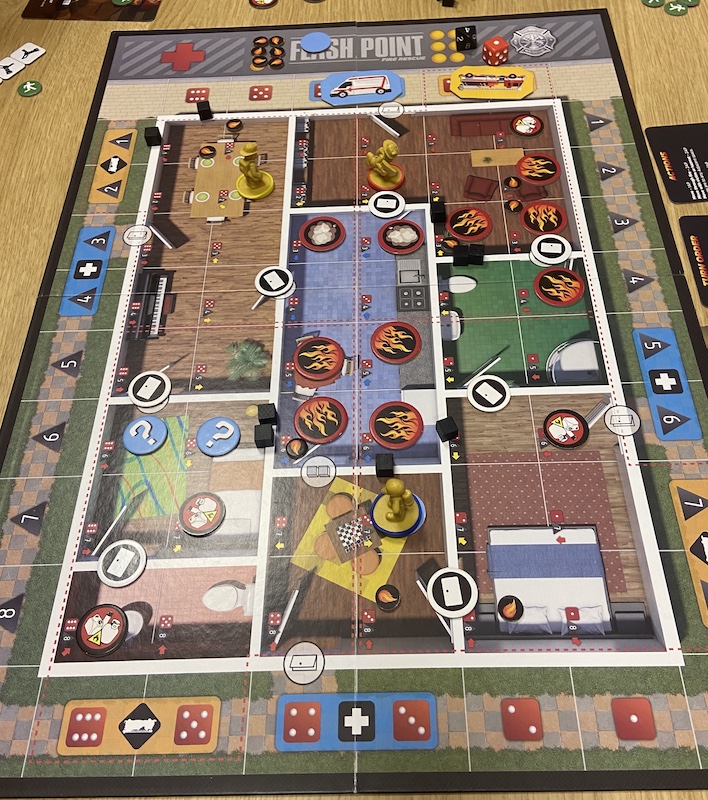 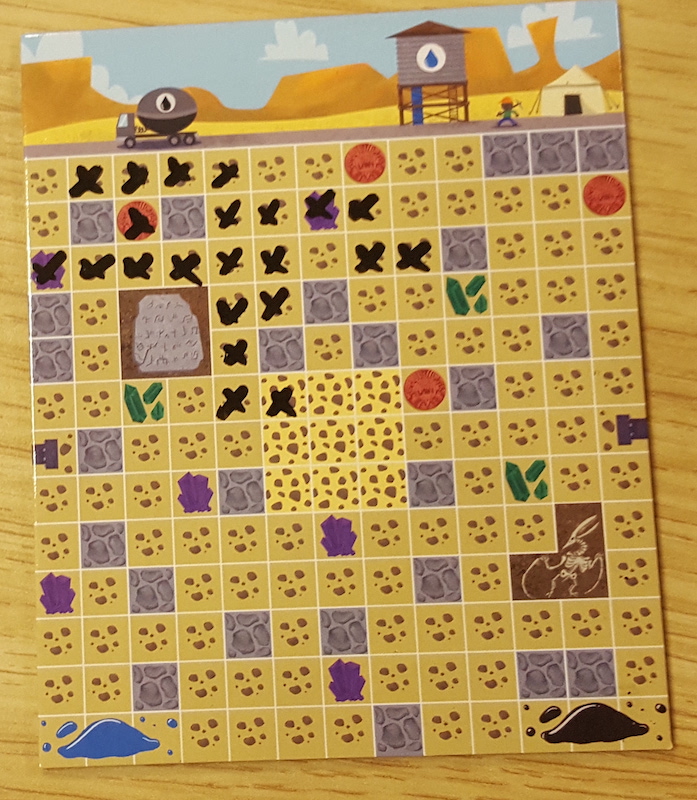 Arboretum and Big Dig were the other 2 warm up games for the session. Arboretum is competitive gardening, aiming to layout the most pleasing series of trees in your arboretum, a set collecting, tableau placement game with some player interaction/back-stabbing on the scoring. Big Dig is incredibly simple. Players draft shape cards to dig out sections on their wipe clean board or explode 1 square instead. The first to complete 3 goals wins. Goals include digging up all of a certain type of icon (coins, gems), connecting map points (oil, water, pipes), or entirely digging around certain features. Games are generally very close and the winner requires optimal use of their turns/card choices to meet the objectives first. 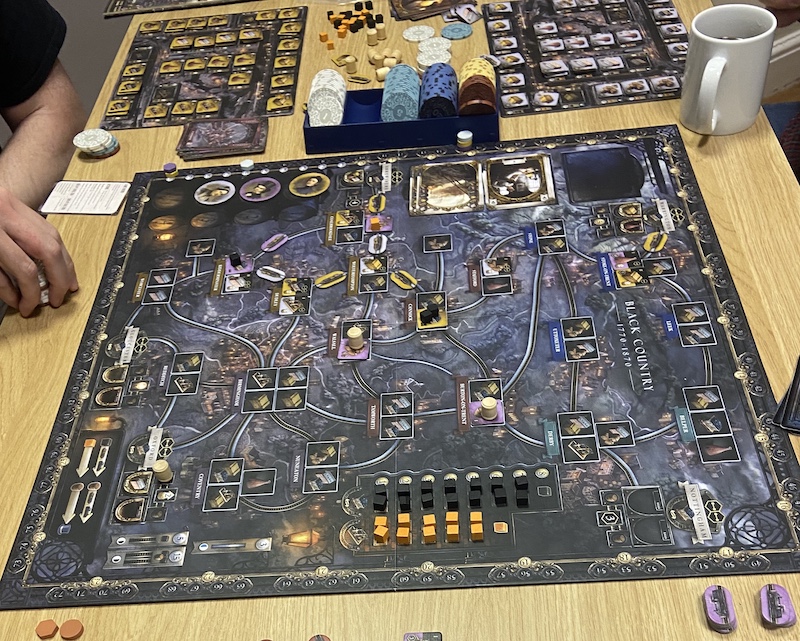 Brass: Birmingham is an economic strategy game and sequel to Brass (by club favourite game designer Martin Wallace) set during the industrial revolution (1770-1870). This was the longest game of the night - it does cover 100 years of history! Players need to develop, build and establish an industrial network, and capitalise on market demands. The game is played over 2 eras, with canal and then rail phases, and has 6 industries (iron, coal, cotton, brewing, pottery, and manufactured goods) providing scoring opportunities. Nathan B. was the clear winner when the second scoring round was added up. 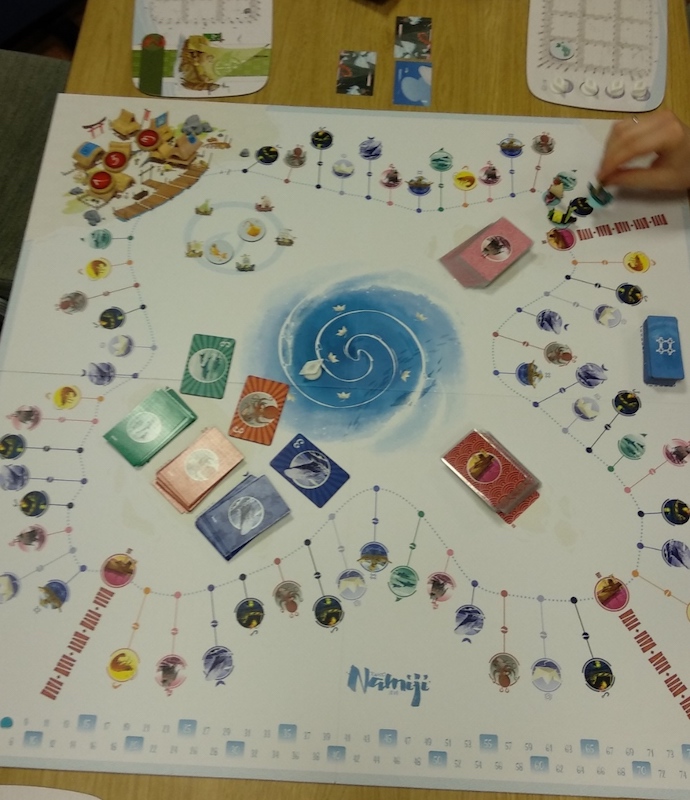 Ross D. demonstrated the newly released Namiji, the sequel to Tokaido, a beautiful game about travelling the East Sea Road of Japan that we have reviewed as a committee favourite but surprisingly never played at the club yet. In this re-implementation the theme is fishing just off the coast of the Tokaido road. You travel around the island improving your fishing equipment, making offerings to the gods, and of course actually fishing for a variety of marine species. 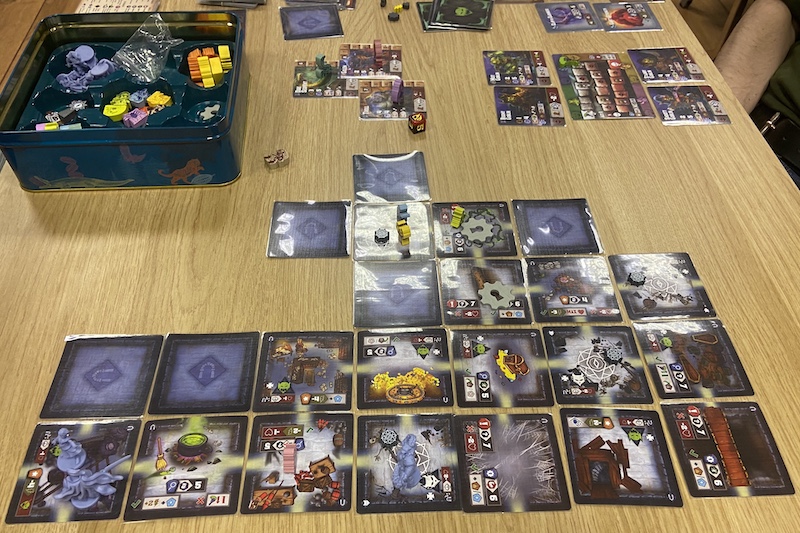 Jeremy J. led an adventuring party of Ian F.W. and Rich W. in Tiny Epic Dungeons. This is a small box game but has a lot of replay in the random dungeons and monsters that the heroes must face using might and magic. This session a brave knight, pandakin brewmaster, and a psionic took on The Seer (a beholder) and his goblin minions, exploring the dungeon and evading traps before the light runs out and they are lost forever in the darkness. It has fairly simple rules so the adventure can start quickly, but a few poor choices or bad dice rolls can tip the balance between success and failure. Fortunately this session the heroes prevailed and evil was vanquished. 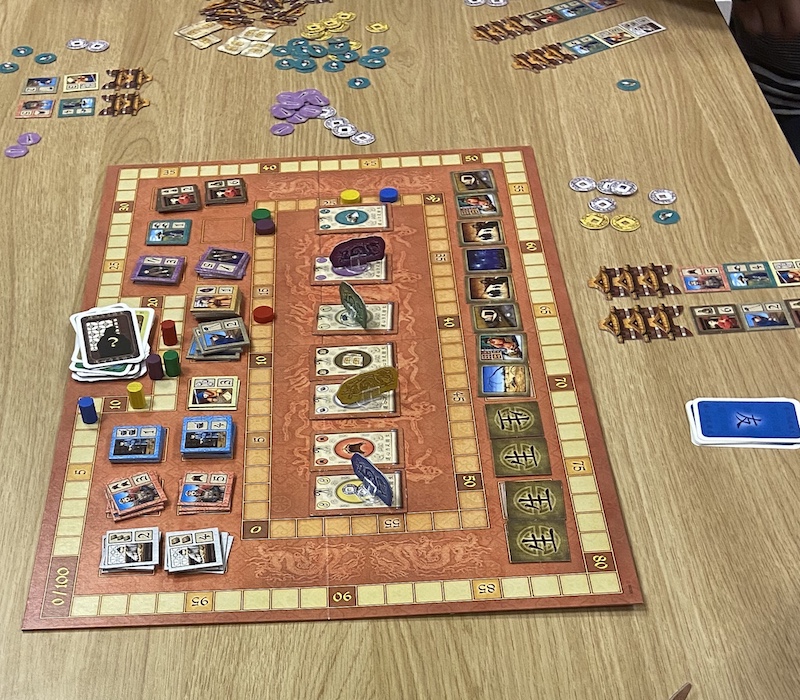 The final table of 4 were Chinese rulers In the Year of the Dragon, which is a 12 round (12 months in the year) game, drafting workers for their city to try to survive a series of monthly disasters including drought, disease, and Mongol invasions, and raise enough money for a tribute to the Emperor. The game requires careful drafting and hand management to survive the year and ideally prosper.

Two of the games Lost Ruins of Arnak and Brass: Birmingham had been booked before the night started (Discord board-games-requests channel) enabling committee members to get the games setup at the start of the night and a quicker start as these are quite long with 3 or 4 players, finishing around 11pm. If you see a longer game in the blogs and want to try, or have a long game of your own you want to bring and try with new opponents, it is helpful to suggest it in advance and let those interested read/watch up on how to play. Otherwise we do our best match making and filling tables on the night. Now we have reached session 30 we have showcased 108 different games, and there are plenty more to go! Hope to see you in session 31 on 1st June!