This was another bumper session with 17 attendees, 12 returners and 5 new members, over 4 tables and playing 9 board games. It is great that word of the club is spreading and people are coming along to see what is on offer.

Early joiners started 2 tables for some shorter initial games. With 6 players Ecosystem is proving popular (see session 13). It is quick to learn but provides a lot of variety in card selections and strategies each game. Another 6 players tried Zeus on the Loose, a lightweight numbers game played over a series of rounds. The player making it to the top of Mount Olympus (the pile of played cards) reaching 100 or higher wins, but only if they are holding Zeus, otherwise whoever is holding Zeus wins. You gain Zeus by adding a card to Mount Olympus that makes it a multiple of 10 or matches the card before or through some of the God cards that change the total in various ways. Rounds are very quick (1 round was 2 cards - Hera is a very powerful God but her fealty is fickle and the strategy backfired) and Zeus usually changes allegiance multiple times. First to win 4 rounds and gain all 4 letters of Zeus would be the overall winner but we just played 10 rounds until Ecosystem was finishing at which point 5 players had won 2 rounds each. 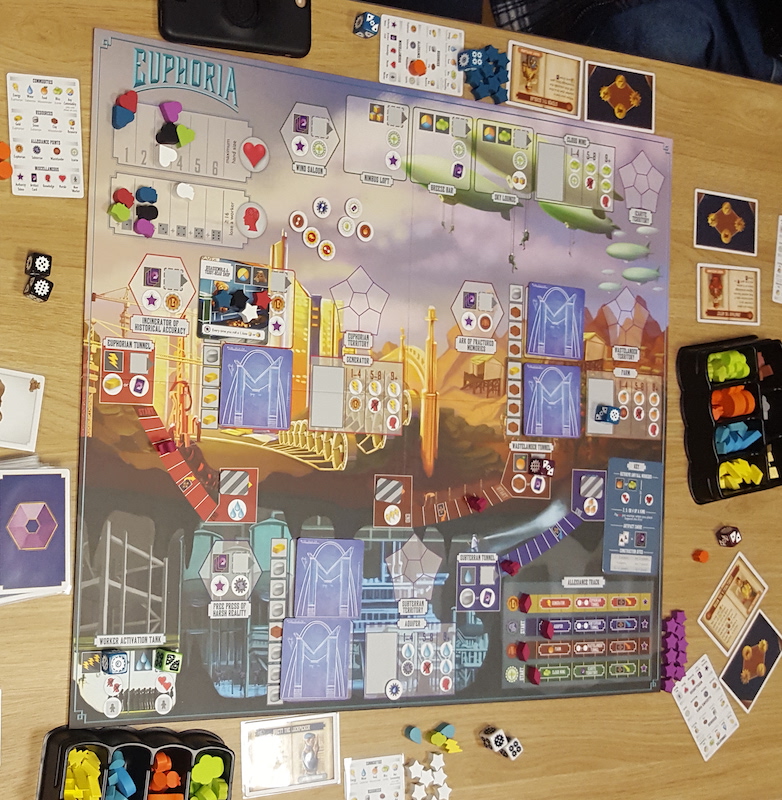 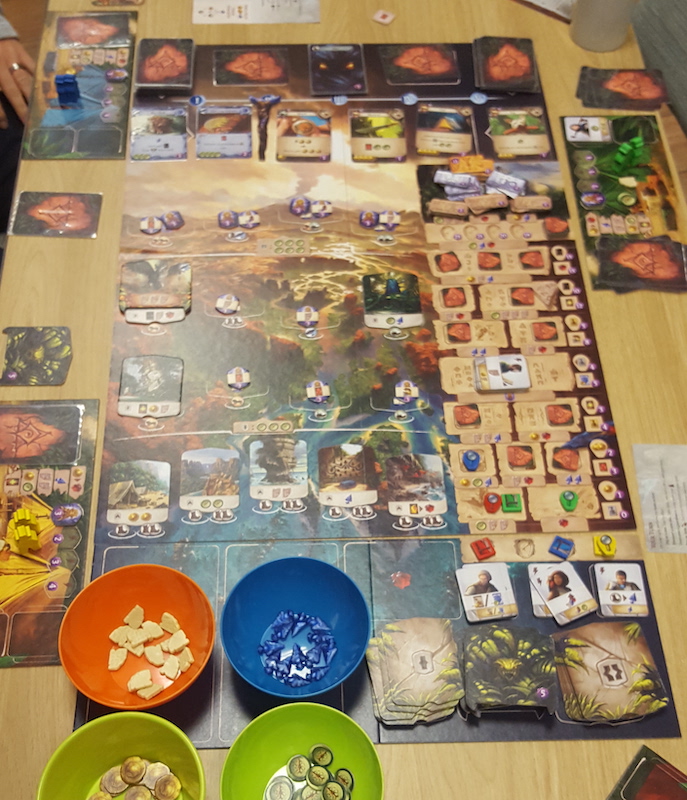 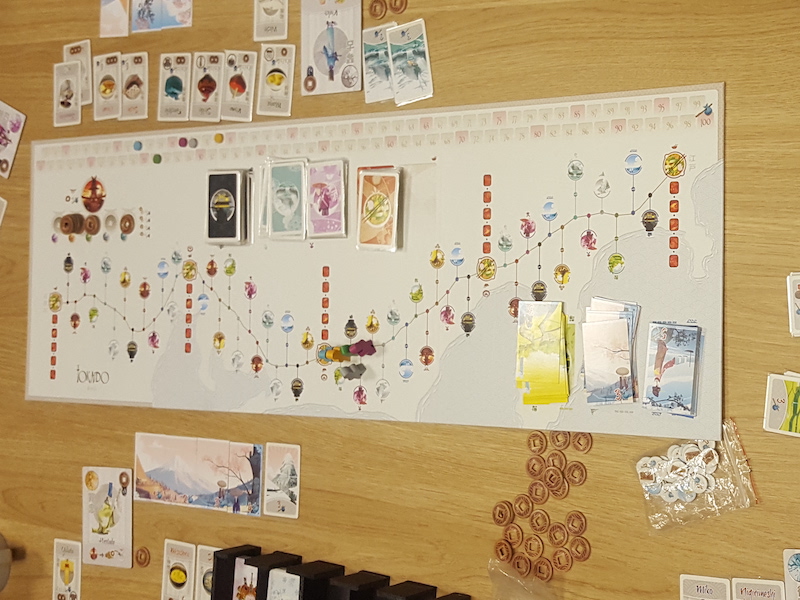 Then we split up into 4 tables of longer games: 5-player Tokaido led by Simon W., 6-player Euphoria with Ross D., 4-player Lost Ruins of Arnak with Jeremy J., and 2-player Neom with Kathy J. All of these games have been played in previous sessions. Tokaido (session 4) is a very pretty journey down the Tokyo-Kyoto sea road gaining victory points by doing touristy activities such as visiting hot springs, taking in panoramas, enjoying the gastronomy, or of course shopping for souvenirs. Euphoria was back after a successful outing in the last (fifteenth) session for a play with a bigger group. Lost Ruins of Arnak is a relatively new and trending game and with a 4-player maximum. It was a popular choice for those who hadn’t been able to join in last session. While Neom also returned from session 14 to provide 2 rounds of city building, it isn’t perhaps so well balanced for two, as game 2 had some severe resource limitations due to the tiles and starting cities that had been randomly dealt but that provided a different strategy focus and gameplay. 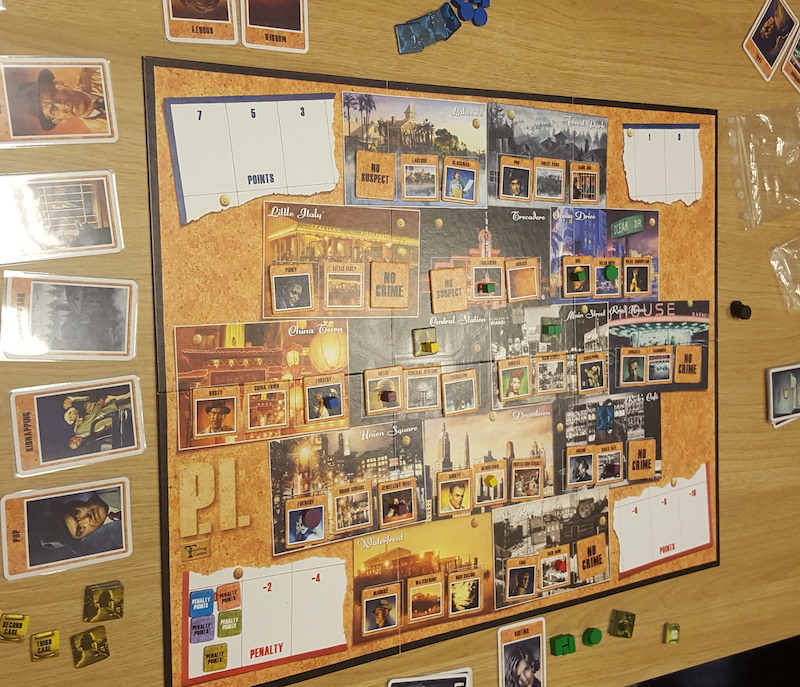 Tokaido and Neom finished at the same time and so with a minor table reshuffle there was a merge to create a 6-player (1 team of 2) game of P.I. with Simon W. teaching. P.I. is a more advanced version of Cluedo with a film noir theme to the board more focused on the logical side of the detection, played over 3 rounds (we only managed 2 this session). Players must work out which suspect (of 12) perpetrated which crime (of 10) in which location (of 14). The board is setup randomly each game with suspect and crime markers distributed to each location. Each player knows the answer to the crime that their left neighbour is investigating and provides the clues when an evidence card or investigator is played - a disc for a correct query and a cube if the actual answer is in an adjoining location. Investigators (5 available to play over the 3 rounds) let you query all 3 evidence types at a location but don’t know which of the 3 the answers apply to. The mechanics are well thought out and although there is a little luck involved as to where your evidence is located and where you initially start looking, the investigators and playing over 3 rounds even that out. 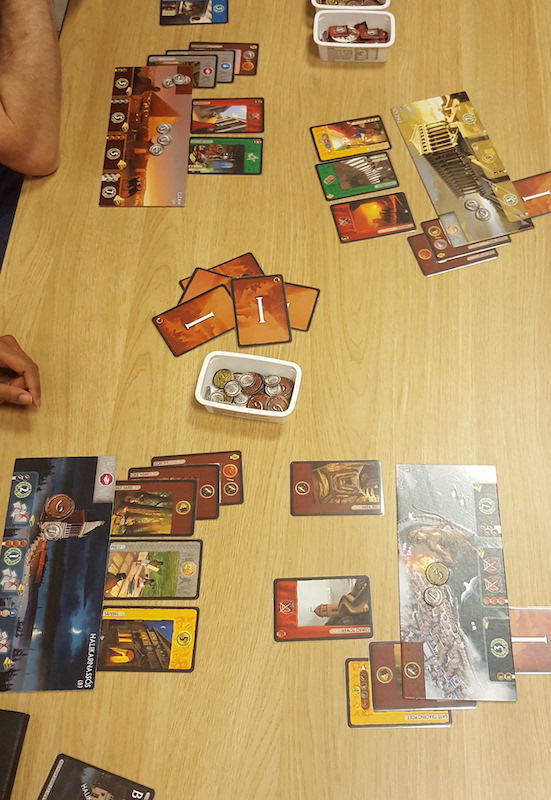 After Euphoria and Lost Ruins of Arnak finished, the night ended with a 4-player game of a session favourite 7 Wonders and another popular fairly short 3-player game of Kingdomino.

The Discord chat before the meeting had suggested some games people wanted to try and we were able to bring most of those along. After the initial table wrangling we got some of them played, but there is always next session. So keep suggesting games you would like to try, the committee are happy to teach games they own or please bring your own games and introduce others to them.