You are telling tall tales of your adventuring exploits in the tavern. Combine cards to tell a story and accuse others of lying about their adventures. A simple but funny game that makes a good start to a games session while everyone arrives. 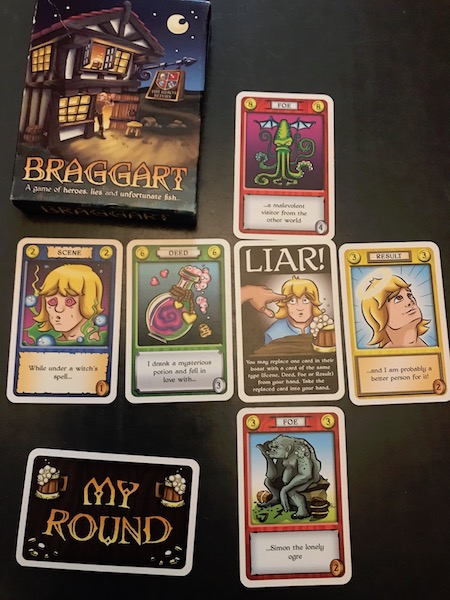 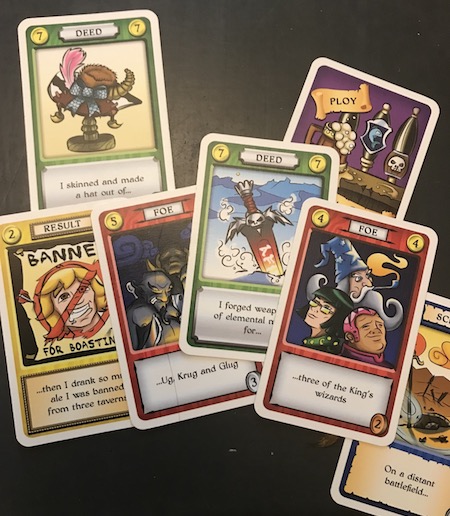 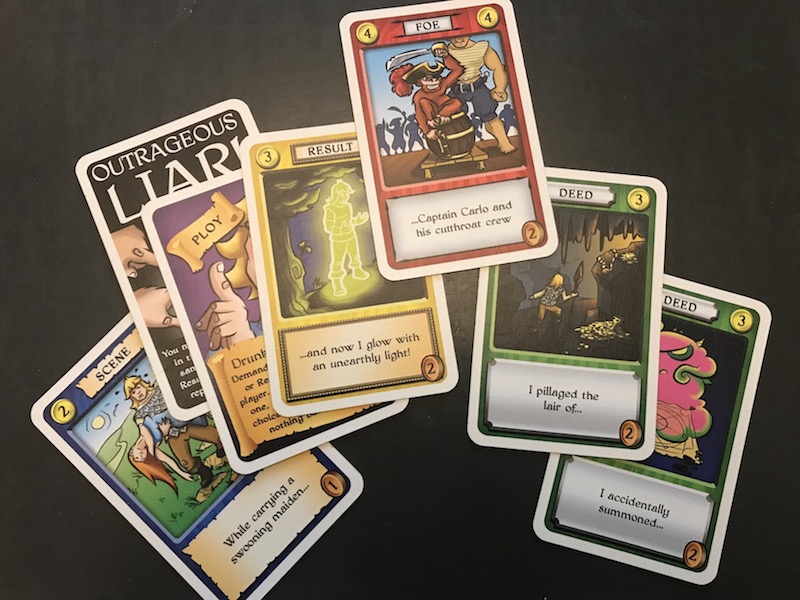 A light introduction to D&D. The game comes with dungeon tiles, figurines, pre-designed characters, and scenarios. Simplified rules for exploration and combat let you get into the action quickly. There is a level of character customisation through initial power selections and some character progression as you gain experience. Plenty of player designed downloadable additional content available. 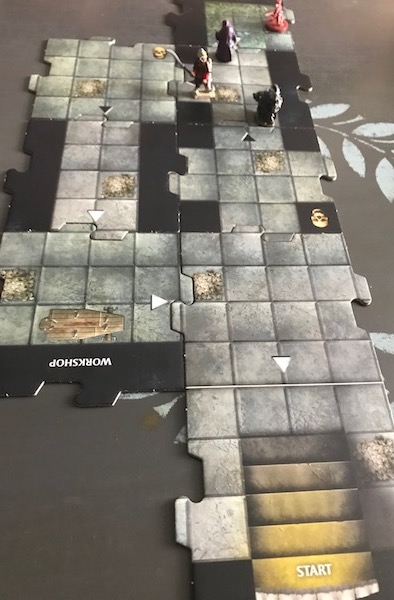 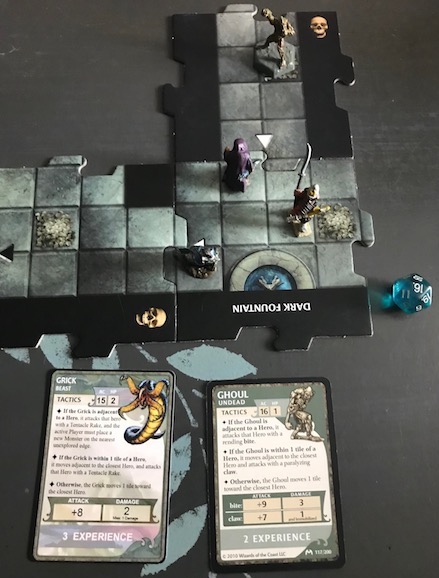 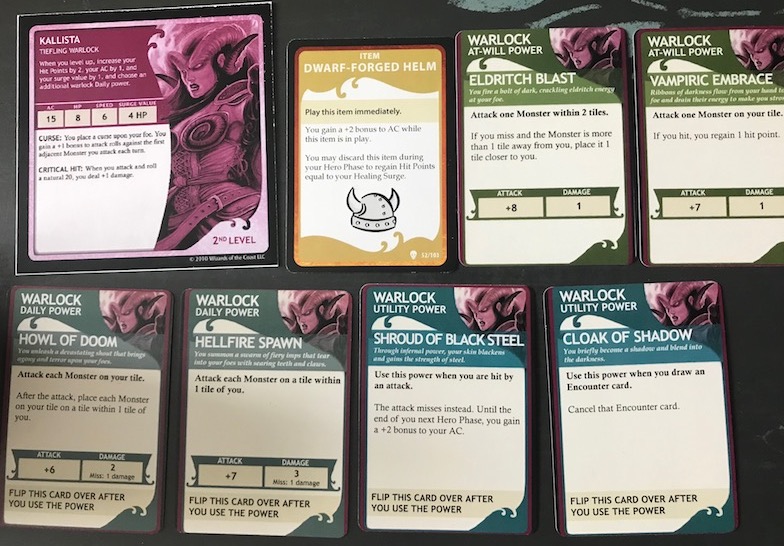 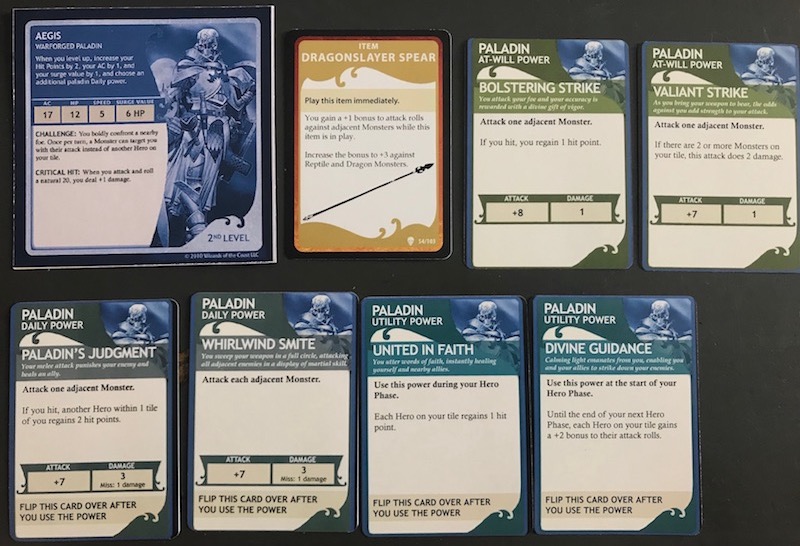 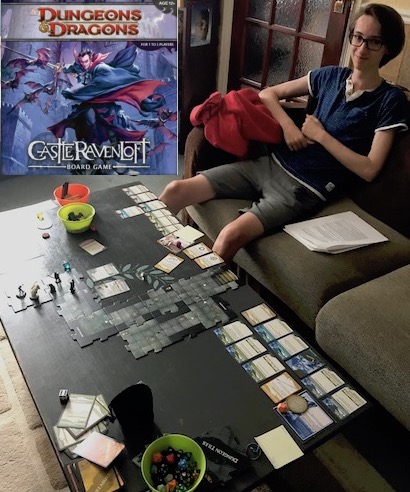 A variant on the deck building genre with the introduction of a double sided board featuring a dungeon below a castle, full of treasure but inhabited by a dragon. Players all start at the entrance of the dungeon with the same 10 cards. Card have icons that let their meeple move around the dungeon, fight monsters in the dungeon and buy new cards. You draw 5 cards per turn, recycling the discard pile back into play once the draw pile is depleted, so cards are continuously cycled. The aim is to grab the most loot and make it out before the dragon gets you. The dragon is attracted by the noises (“Clank”) you make as you move around his dungeon, which adds cubes of your colour into a black bag, and when enraged the cubes are pulled out of a bag to determine which players are found and hurt. Each game is different due to the varied decks you can build, monsters encountered, routes each players can take and a bit of luck with what loot you find and in evading the dragon. There are also 2 expansions adding Egyptian or underwater themed additions to the base game. 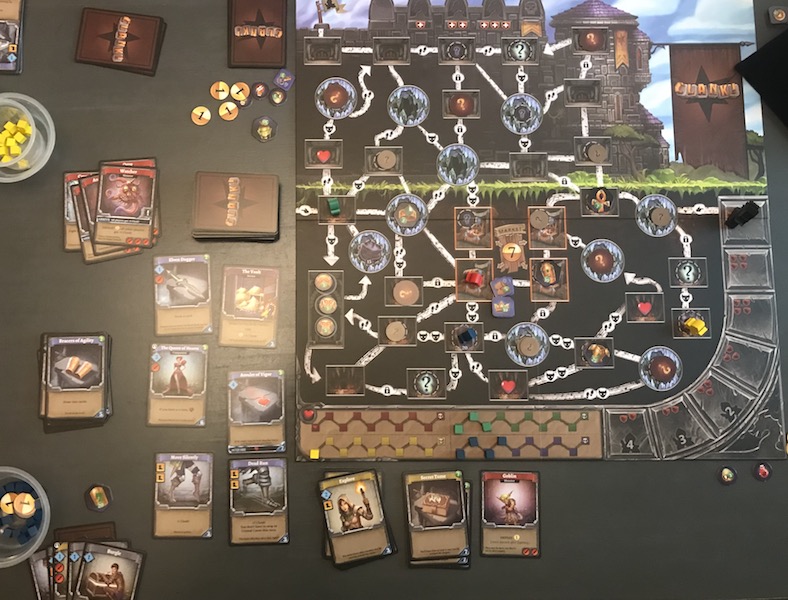 Build a kingdom out of domino tiles that feature 6 terrain types. Players use a simple drafting mechanic to select the domino tile they will place in the next round. Score points at the end of the game based on consecutive terrain types and tile placement to create a 5x5 grid with your castle ideally in the centre. 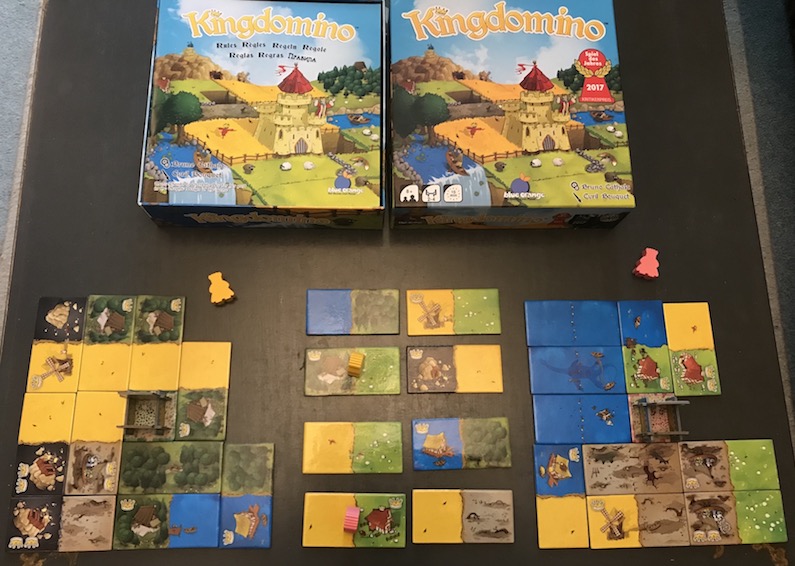 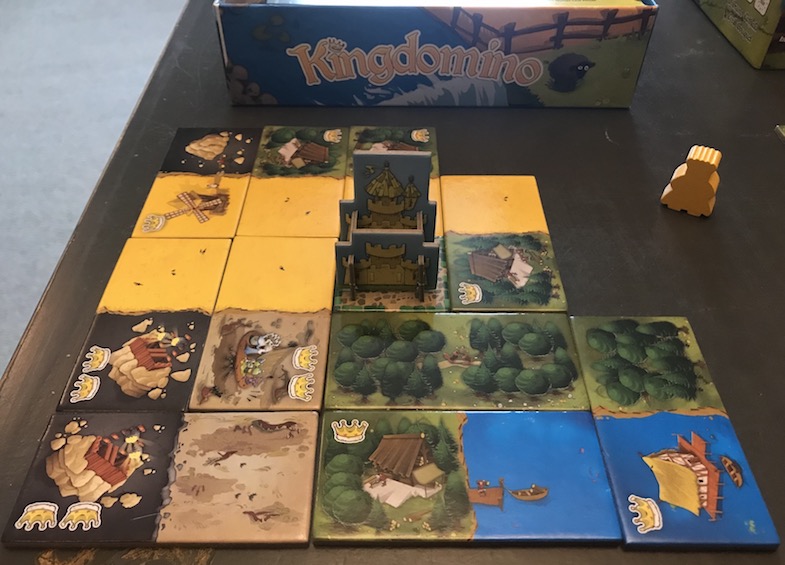 Lord of the Rings

A co-operative card based game authentically recreating the events in the book trilogy, following the hobbits from Bag End to Mordor. Some locations help the hobbits giving them help (new cards) and in others the hobbits have to avoid the forces of evil while collecting the necessary items to get them to safety and avoid Saurons corrupting influence. Game play is generally about playing white or grey versions of friendship, travelling, fighting or hiding cards with some special cards depicting other characters or items in the books. Playing these cards enables the hobbits to traverse the different tracks and escape each location; Moria, Helms Deep, Shelob’s lair and finally Mordor. Quite a challenging game and one for fans of the LOTR universe. 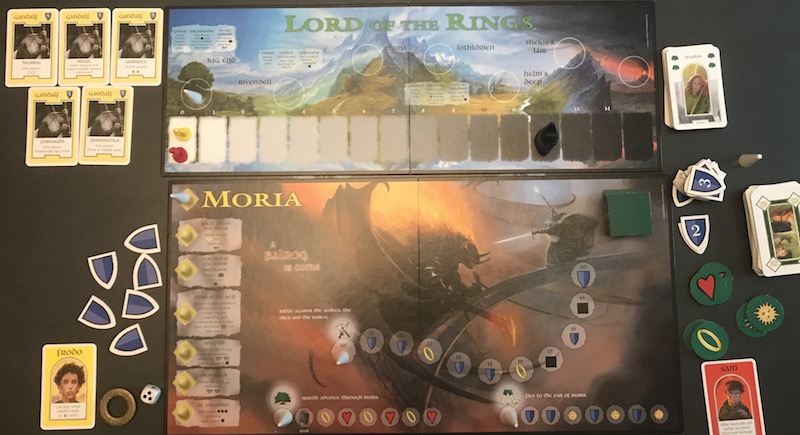 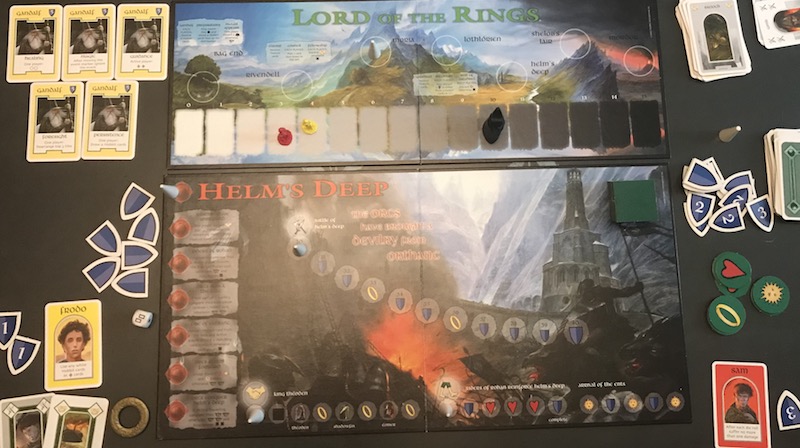 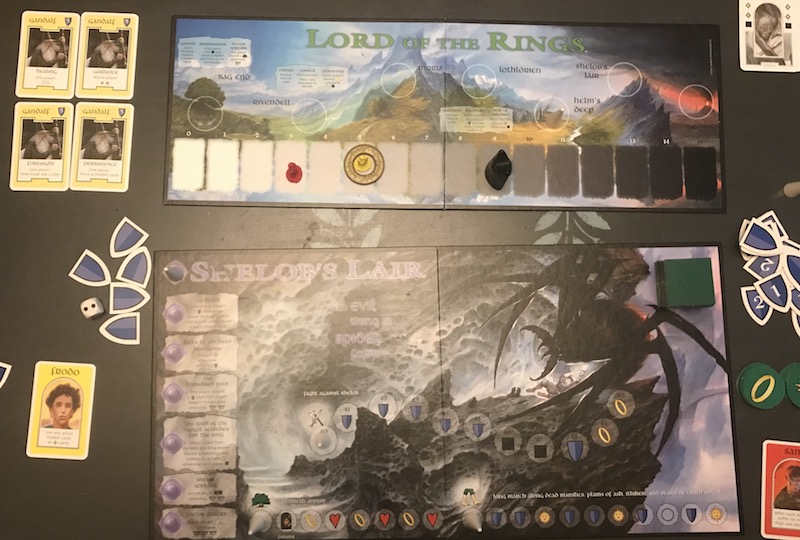 A very simple game so it is quick to teach and get playing and has a nice pace and variety that keeps everyone involved. The game has 25 different “athletes” or characters, each with a special power, that you take turns drafting to join your team. You start with some seed money and the character choices are lined up on a drafting board - just 5 spaces with the character at one end costing 0 to recruit then increasing in cost across the board - make your choice and pay the cost. Then characters slide down to fill in the gap and a new one joins in position 5, continuing until everyone has a full team.

The next phase is the races, where you flip the board over and everyone secretly chooses a character to run each race, with the victory points available per race for first and second place increasing as the game continues. Each race is literally just dice rolling apart from the special powers, which is where the fun starts as the powers and die rolls can interact in wildly unpredictable ways.

Some abilities are very powerful, some are very random, and some don’t even occur during the race. The Merchant can switch places with another character instead of rolling, the Amazon can move five spaces every turn without a roll, the Centaur kicks other players backward as he overtakes, the Demonologist can roll and move another player that amount backwards and then himself forward one. Whilst the Thief simply steals a victory point and is useless in the actual race, similarly the Prophet secretly predicts which character will win and then automatically comes second if correct. Cupid is more random, he gets to move five spaces if a male and female character in the race share a space whilst the Priest can move the last placed player forward 2 spaces but gets to move himself forward 1 as a reward. As a final example, the Philosopher can choose to negate everyone elses powers, an interesting combo in a race with the Druid whose power is to move forward one whenever a power is used.

In general the races run quite balanced as people choose their weaker characters in the early races and more powerful ones later and as it is such a lean quick game to play you get caught up in the silly and often cascading powers. 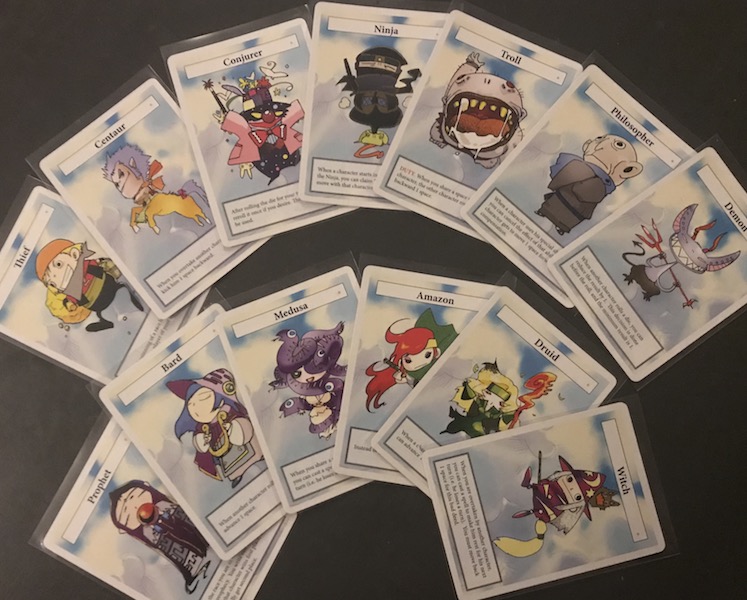 A short game where adventurers fight to divide the loot using a shared spellbook. Each round players choose a spell and simultaneously make the hand gesture for the spell towards its player target. Then resolve the ensuing chaos of success or spell reversals until the loot has been divided. A fun take on D&D whilst waiting for the main session to start. 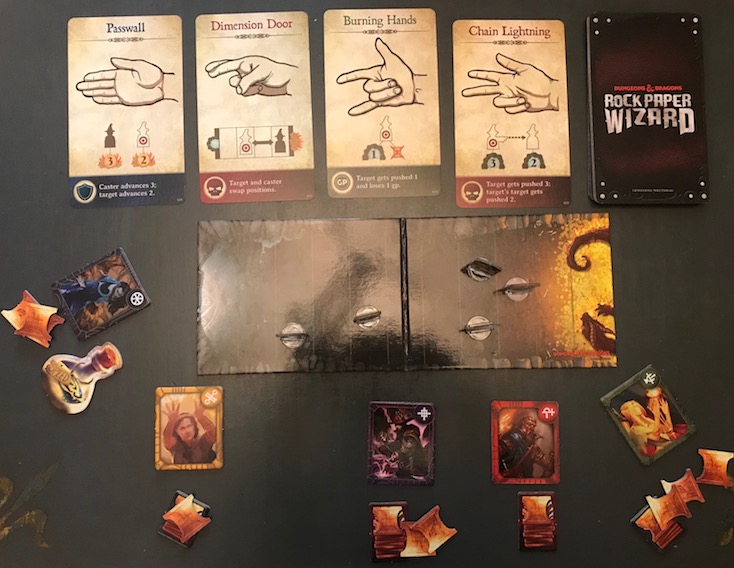 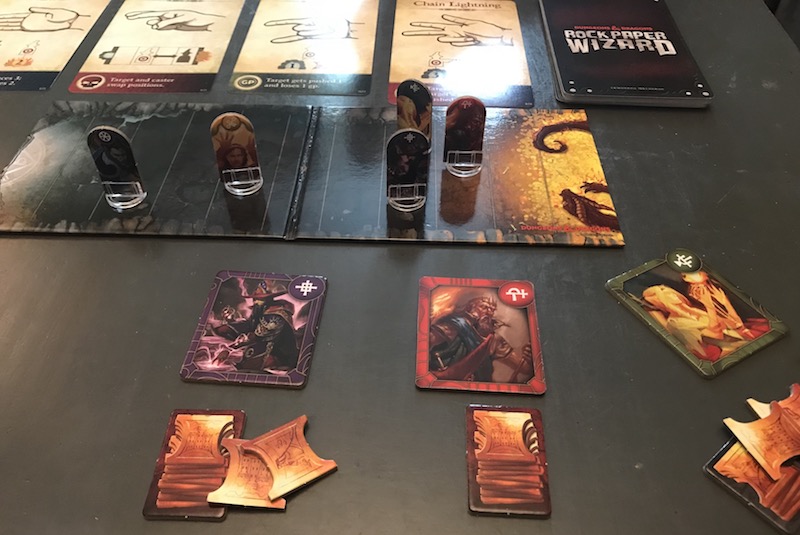 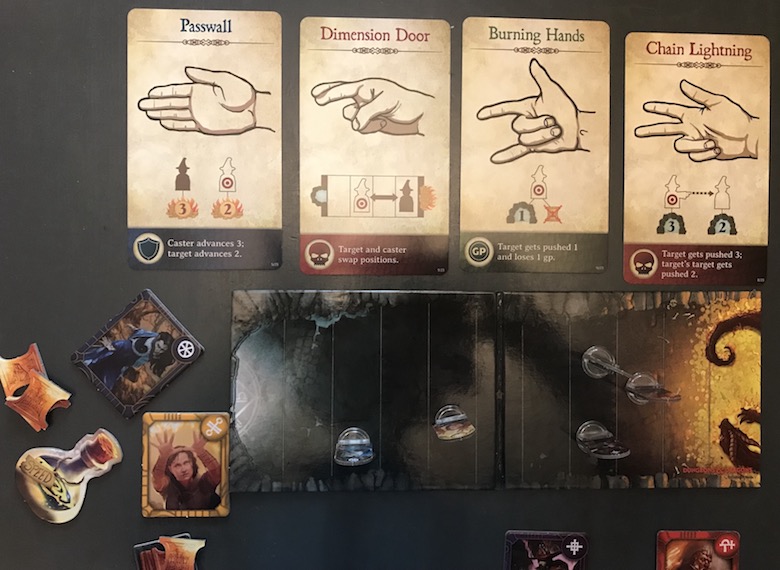 Place domino like cards on the table to build a string of 7 adjacent dragons the same colour as your secret goal. However there are also cards to change the layout or swap goals between players. 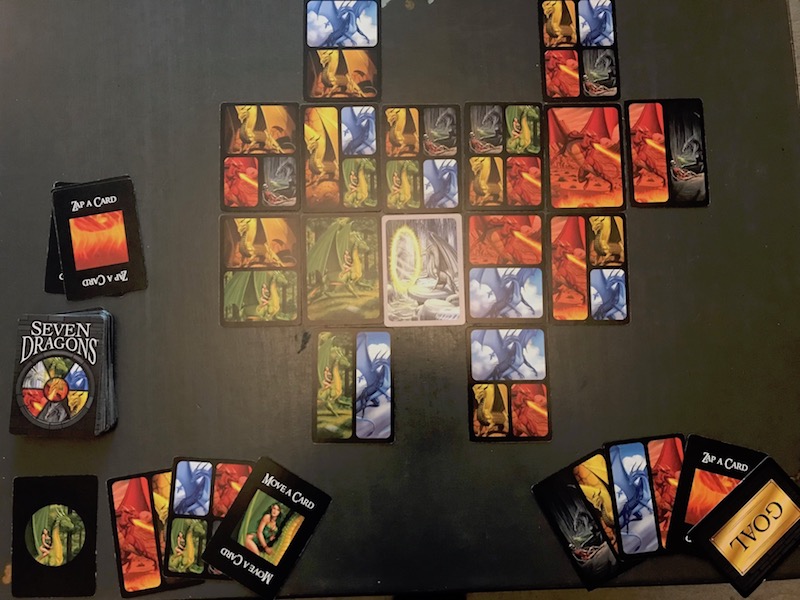 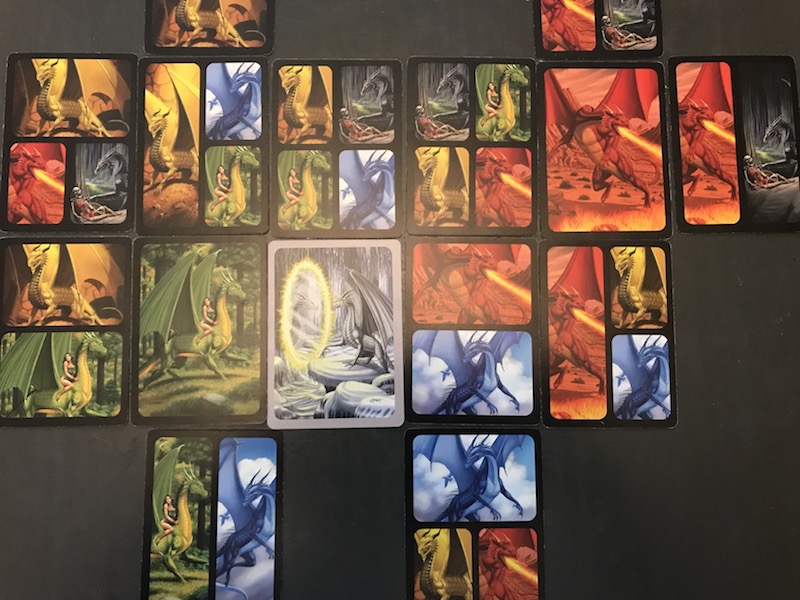 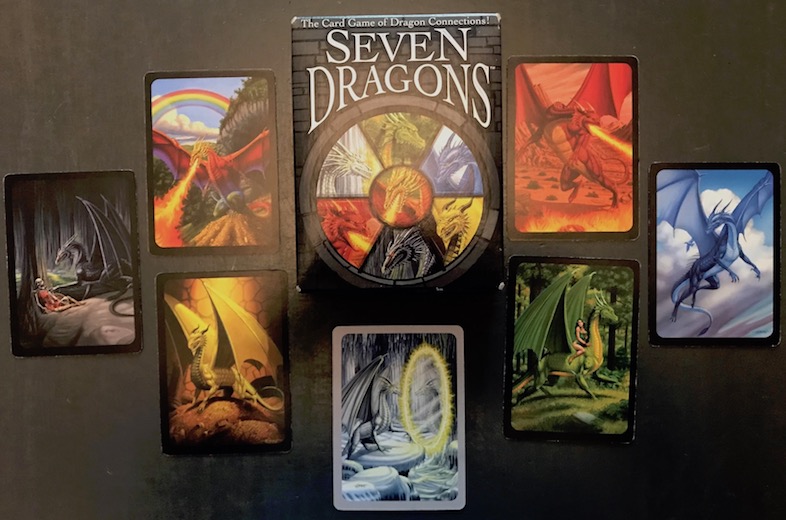 Small World is a bit like Risk with your army advancing across the lands based on army strength and some dice rolls. In Risk it generally just becomes a back and forth between players spreading themselves too thin as they try to wipe out the opposition and fail to get enough winning rolls. In Small World there is much less chance due to dice rolls, and more strategy in letting your army spread out and then decline and choosing another one to go on a rampage next.

You start by choosing an army which consists of a fantasy race, like elves, goblins, dryads, or ratmen, and a special power, like dragon master, barricading, merchant or flying, from a randomised set of 6 pairs of traits drawn at the game start, then go invade. The board map has a number of different terrain types which may favour or hinder progress depending on your race or powers. Basically you invade by having more forces than the amount of obstacles that are in that land already; defenders, terrain or other items left by the opposition; and you leave that number of forces behind. The final attack of your turn can use a dice to provide that final chance to push the odds in your favour. Then you gain victory points based on the number of lands your army holds and any special race or power bonuses and then the opposition get their turn. After a few turns you will be running out of available forces without withdrawing from previously conquered lands and you should decline, this means you miss a turn attacking but hold all the land you had conquered and choose a new race/power combo from the stock. This new army can then pick a new part of the map and start invading on the next turn, at the end of their expansion you score all the territory held by both your new and old armies.

The game is a refreshing spin on Risk with a fantasy theme, nice artwork and humour and a lot of replay potential with all the possible race and power combos to test against each other. Can the heroic humans overcome the pillaging giants or the alchemist skeltons prevail against the berserk sorcerers? 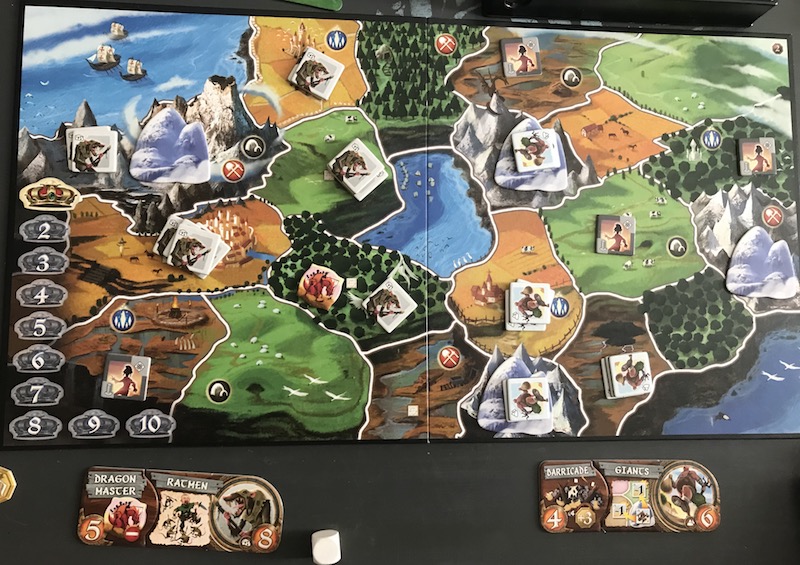 Another challenging cooperative game, this time you are spirit guardians with a variety of nature or elemental themed magical powers defending the island from colonising invaders. Each round you have fast and slow powers, fast powers act before the invaders and slow ones after them. You also know which terrain type the invaders will be targeting next so you can plan ahead in a turn but the flood of invaders is relentless and once they get a foothold they are difficult to root out. Fortunately as the game progresses use of your magic scares the invaders and so the game becomes more of a survival challenge against the blight the invaders cause and waiting until the fear level causes them to flee. 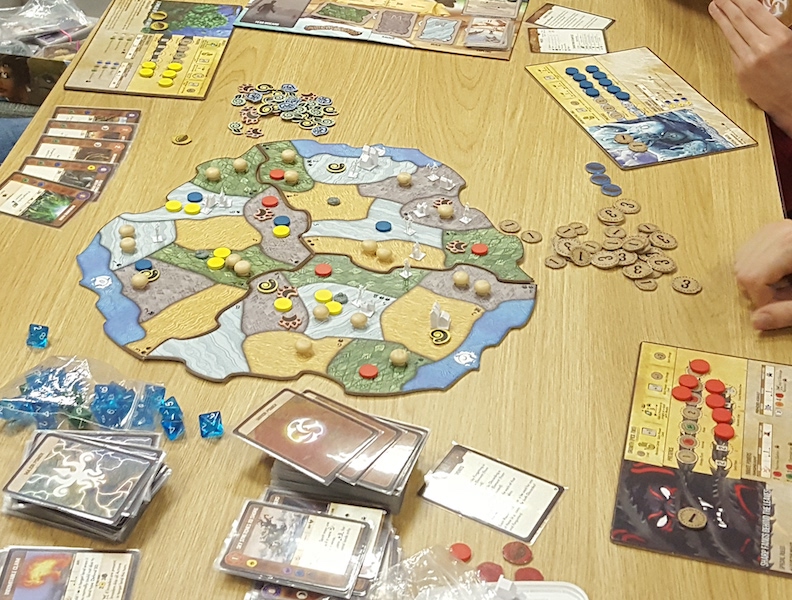 Players draw 2 tiles (fates) from a bag that are marked with the numbers 1 to 9. They must keep 1 fate secret for the other players to guess its value, whilst placing their other fate on one of a series of common cards with numerical based rules on them to give a clue to the hidden fate. There are only a few rules cards visible at once and they fade as they are used, wrong guesses add doom to the counter and the team need to make enough correct deductions before their doom is sealed. Simple in principle but depending on what rules are available the choice of which to use to convey the most information can be tricky and it can take a few rounds to narrow down the options to a safe guess. 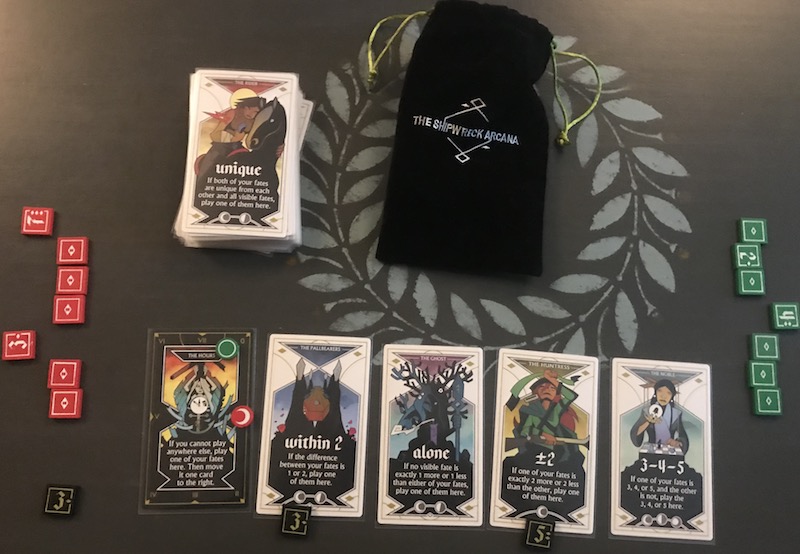