Develop one of the 7 Wonders of the ancient world over 3 Ages. You need to balance collecting building resources against the different methods of scoring victory points; military, treasury, Wonders, civilian structures, science, commerce and guilds. A simple game mechanic, each age you start with a hand of 7 cards. Choose a card that you can play by either having the resources, buying the resources from your neighbours or having a construction chain from previous cards. Then pass the hand on. Continue until the hands are depleted, which triggers an end of age military scoring round and then start the next age with a new hand. However the challenge and re-playability comes from the selection of those cards to build victory points or stop the competing Wonders from getting them. 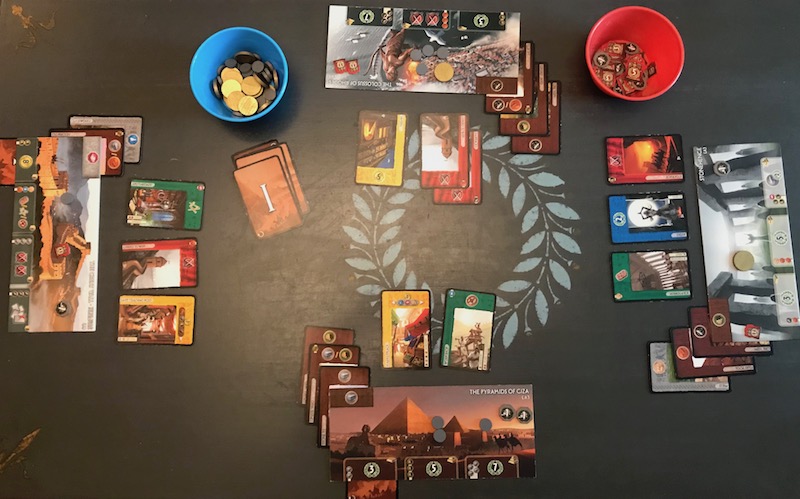 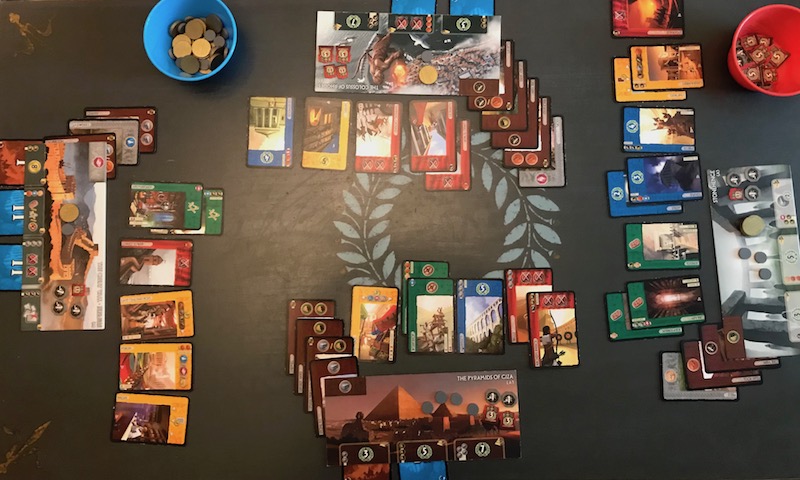 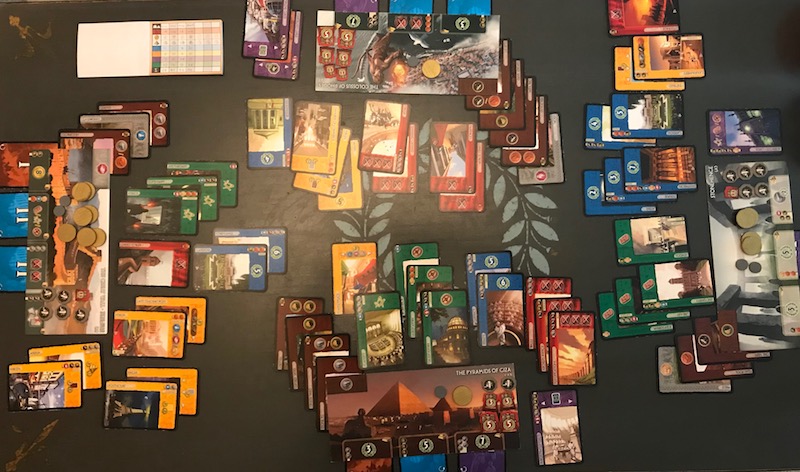 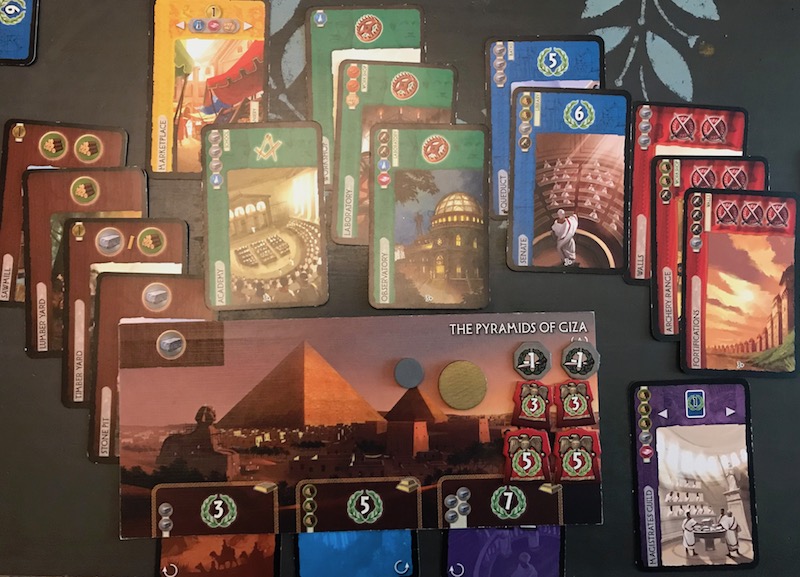 Cleopatra and the Society of Architects

A beautiful game that even uses the game box to construct a 3-D palace for Cleopatra. Combine card types to build different parts of the palace from a card based marketplace mechanic. But use too many dodgy components and you accumulate corruption points, the most corrupt player gets thrown to the crocodiles then the remaining players score to determine the best architect. 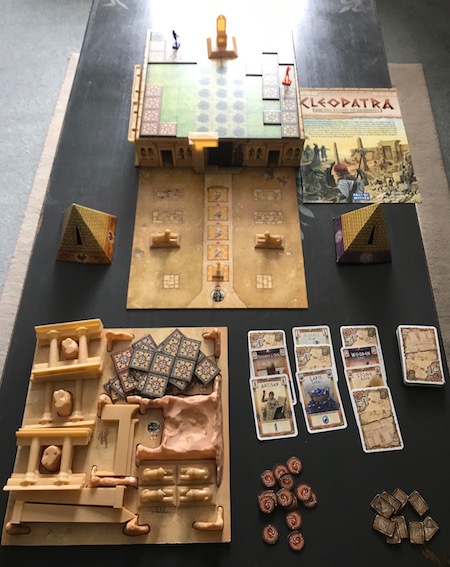 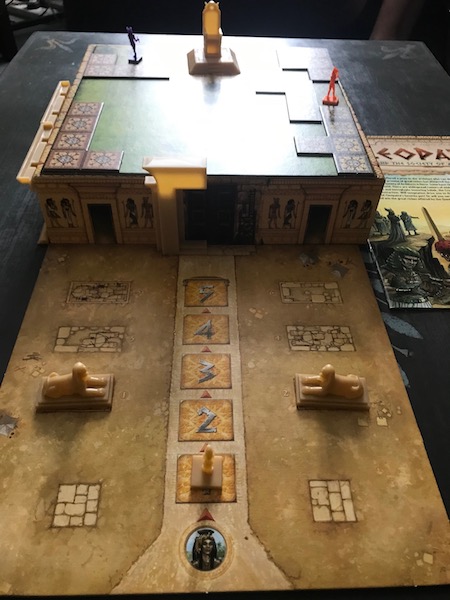 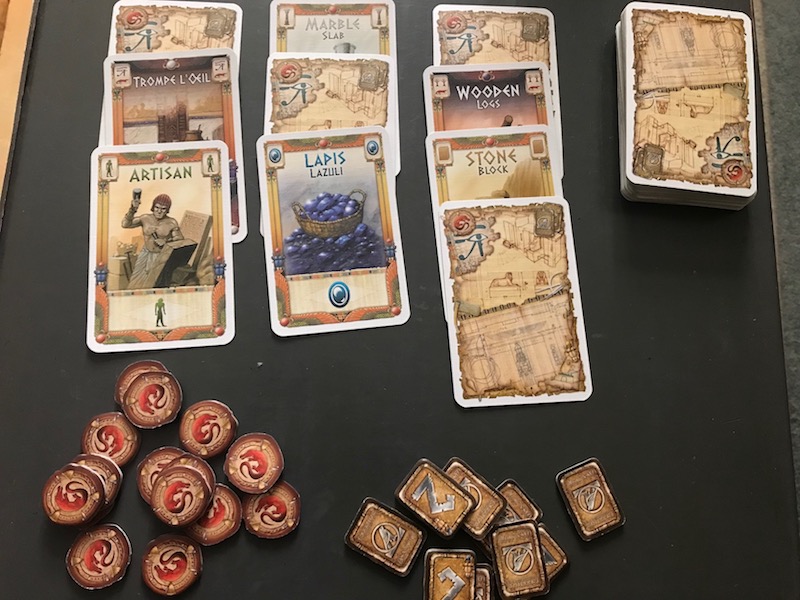 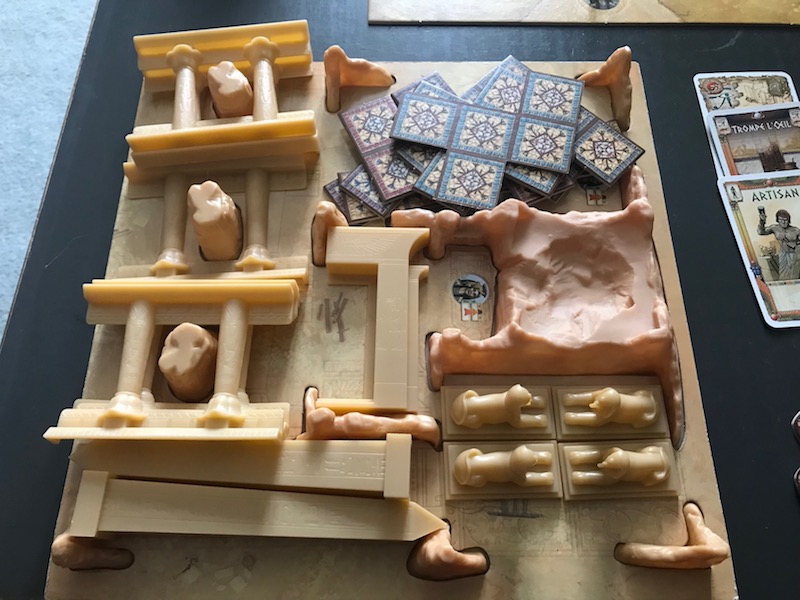 Produce some of the greatest Roman spectacles in your colosseum show, the bigger the show, having enough of the requisite performers and attracting the most nobles will amass the victory points and see you crowned master impresario. With lots of beautifully designed components and a variety of authentic shows to choose from, this is an interesting historically themed game.

During the game you develop and expand your colosseum, buy and trade performers, from gladiators and lions to musicians and comedians, and finally put on the show. Points are scored over 5 rounds based on how big a show and how many of the necessary performers you acquired, if any were star performers, how many different shows you have performed and how many and which nobles attended the show. At the end of each show one performer or piece of equipment has a terrible accident, and the last place player can acquire a performer of their choice from the first place player to re-balance the game a little and then the show goes on. 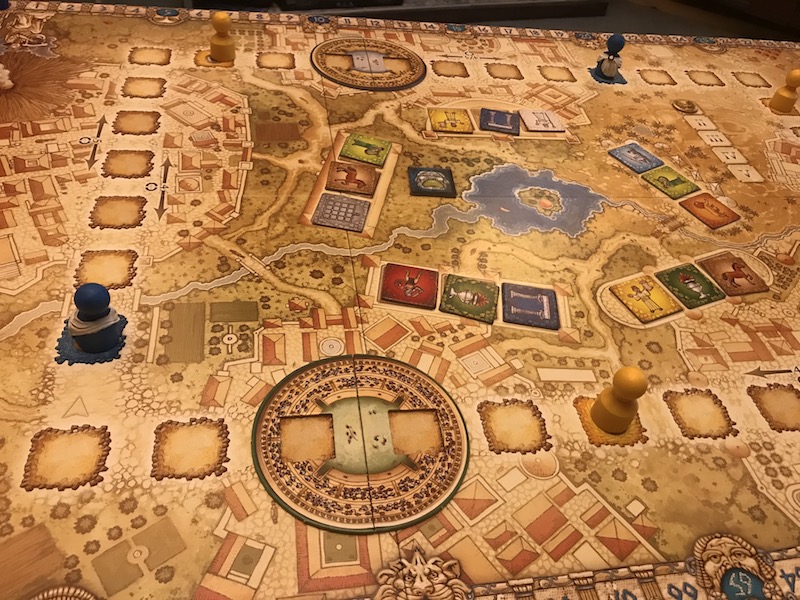 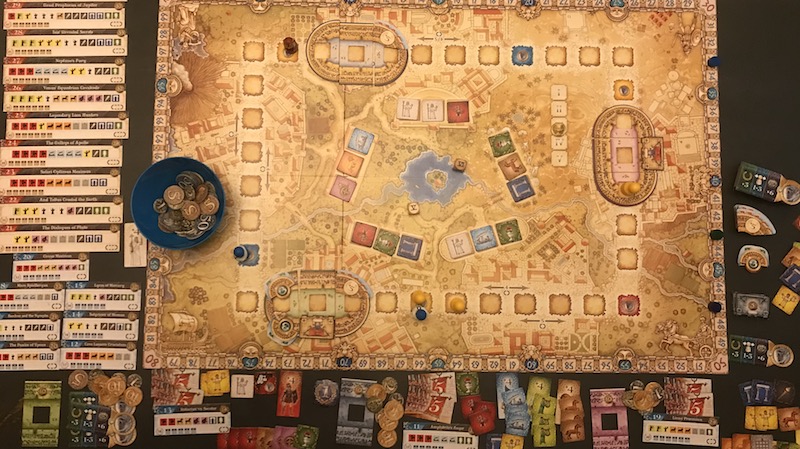 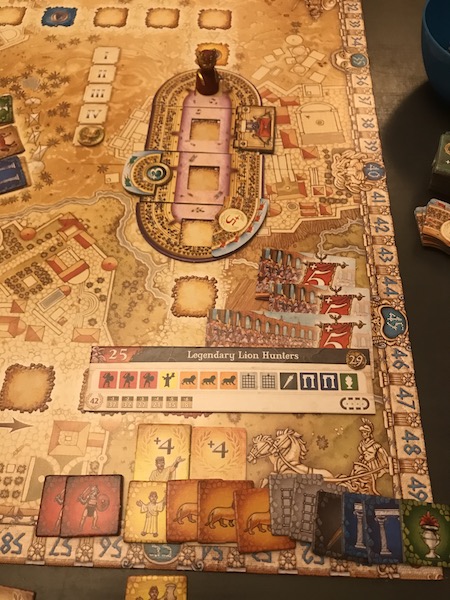 You play the governor of the thriving trading colony and Caribbean island of Puerto Rico. Each round you select one of 7 roles bringing a bonus for you to that role, for instance all players can construct during the builder phase if they have enough coins but the official builder receives a discount on building costs. It also means that not all roles are selected each turn, so your strategy can make use of which roles you think your competitors will choose. With limits on how many goods can be stored before they go off and limited space on the trading ships it is a careful balance of production, trading or construction of buildings with properties that assist your expanding trading empire. You score victory points through building and trading, fairly simple to learn after playing a couple of rounds but there is a lot of strategy and variety in the choice of roles and constructions to rake in those doubloons. 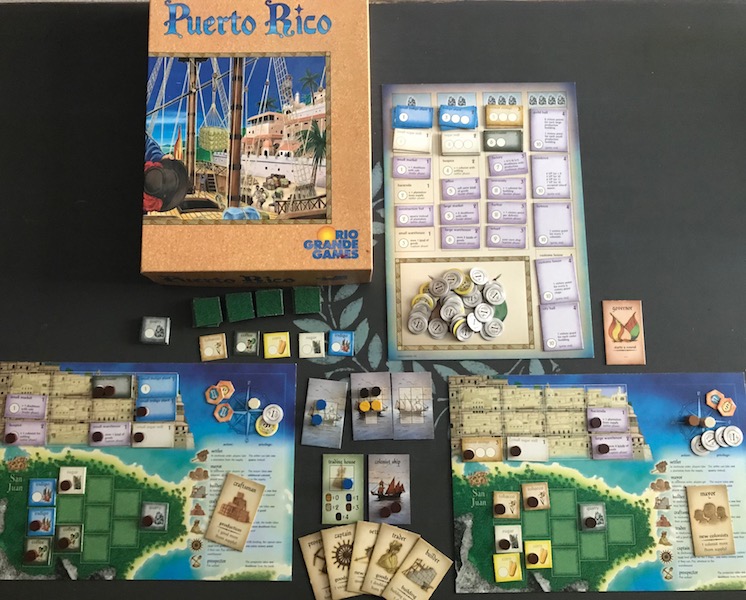 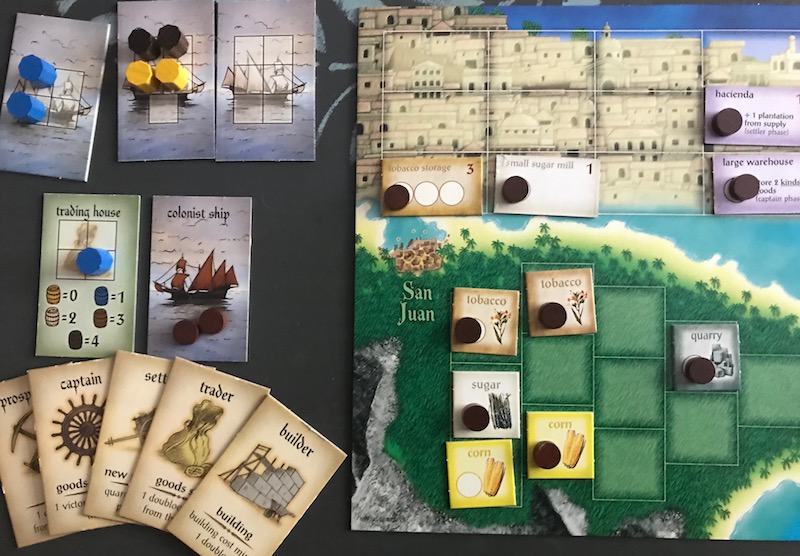 Roll through the Ages

Rather like Yahtzee, this is a dice rolling and locking game but with a civilisation development theme. Each turn you need to roll the dice, 1 per city starting with 3. Then you can choose to build more cities, keep enough food to feed your population, or gather trade goods to gain developments and build monuments. Some die combinations will hurt your opponents and some can hurt your cities but developments can counteract these. The game ends when all the monuments have been collectively built or one player has researched 5 developments. 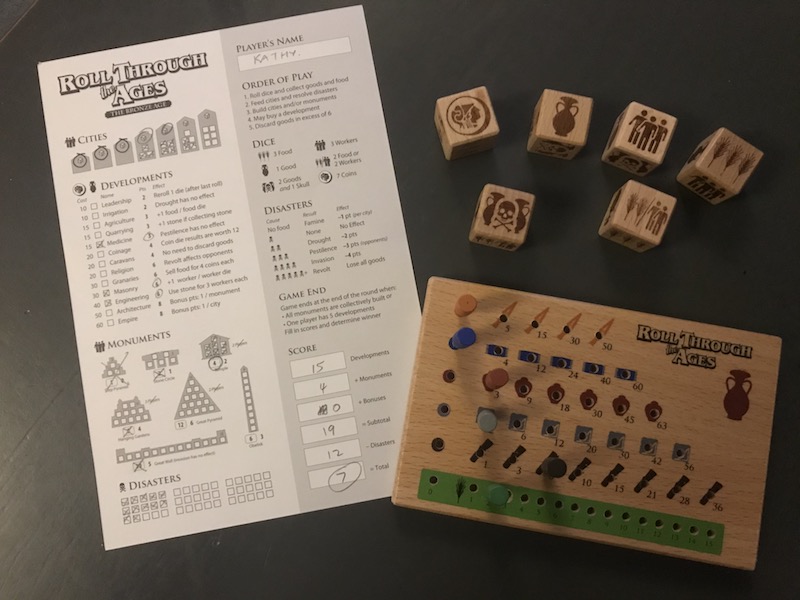