A record breaking session with the most attendees so far (15), the most different board games played (7), and the most game plays in a night (9 - 2 games played twice). Not forgetting an RPG table trying to bring some modern infrastructure to a fantasy setting!

Initially everyone was too polite to choose a game but a 4-player Planet building session hosted by Jeremy J. was started. Table 2 came with a request for planting a Cottage Garden so Catherine D. led that and the last board games table settled on developing the thriving trading city of Puerto Rico which Kathy J. explained. 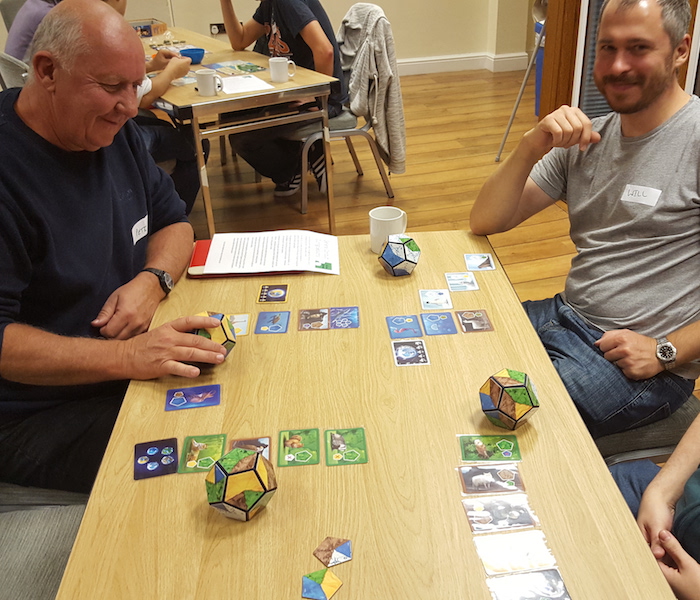 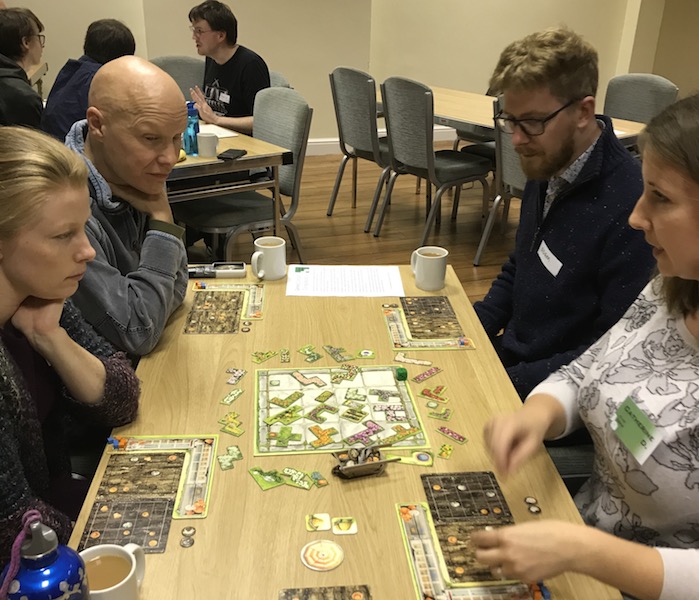 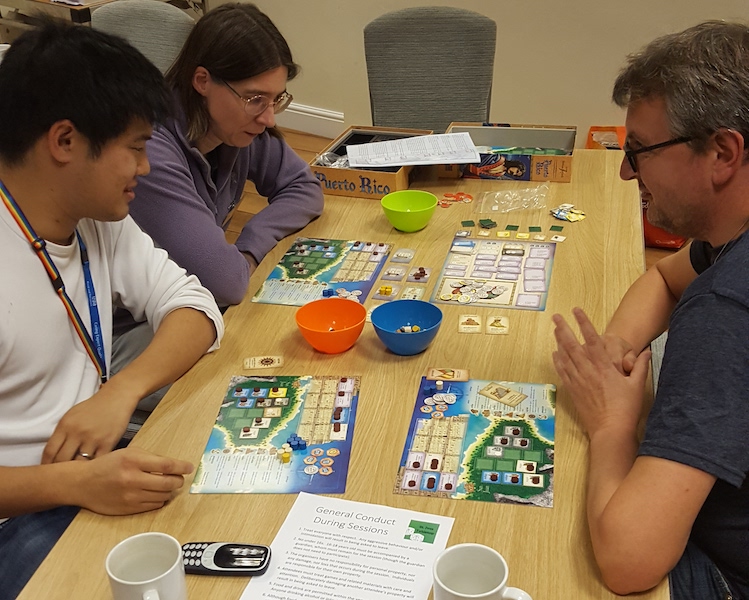 Planet is a fairly short game so the first table managed 2 plays of world creation and then a quick game of Age of War led by Will B., a dice rolling push your luck game before Cottage Garden finished.

Tea breaks and table shuffling ensued resulting in a 5-player game of Cleopatra and the Society of Architects led by Jeremy J. and a 3-player game of Tokaido a Japanese themed game led by Catherine D.. In Tokaido players are travelling the old eastern sea route using a mechanic that lets the last player on the road move next but stopping spaces on the road are limited, leaving players to choose how many and which locations to stop at to gain victory points. Perhaps your planned stop at the scenic viewpoint is blocked and you take a stop at to the hot springs to bathe or see monkeys instead. There are also opportunities for souvenir shopping, donating at the temple, or saving your money for a fancy meal at the inn. 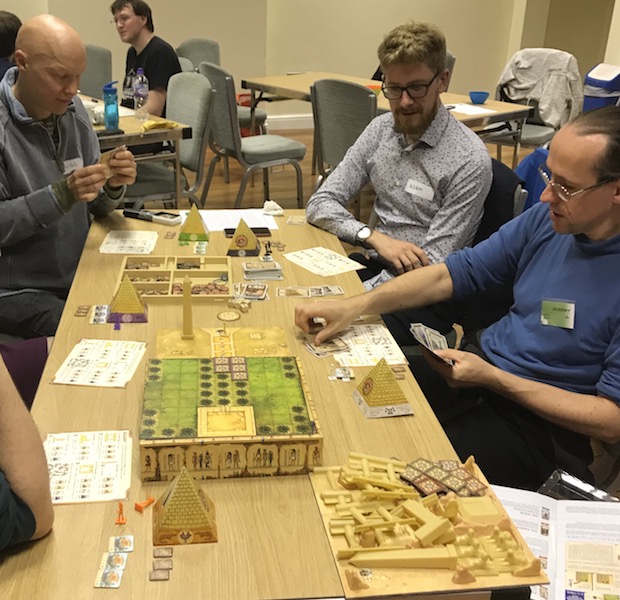 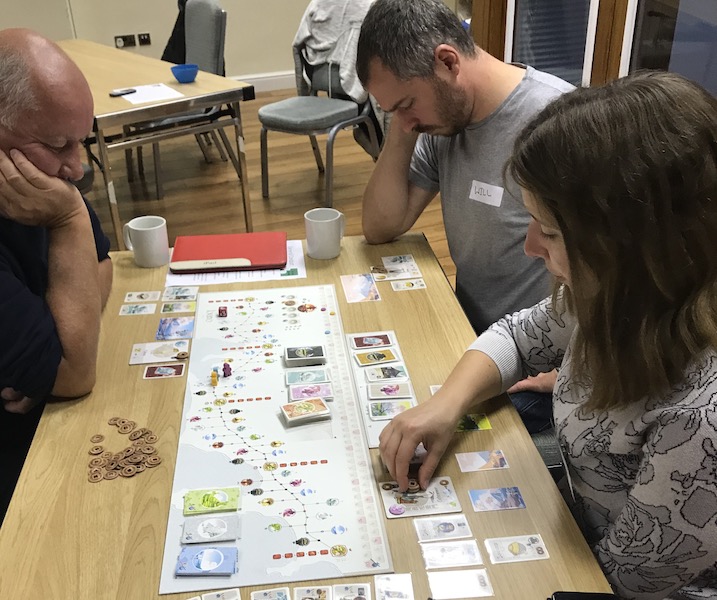 Meanwhile the RPG table was engrossed in a game of Fate narrated by Simon W. billed as a “magical fantasy bureaucratic adventure”. It involved a goblin trade union representative, a human noble, a death snake princess, and a bypass through a forest between 2 previously feuding cities. It certainly generated some lively and in-character discussions and look here for the full story. 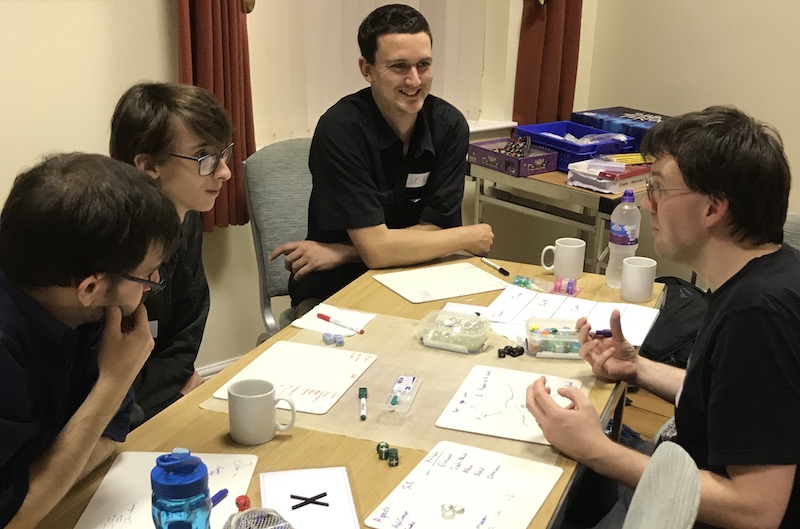 Puerto Rico gave way to more green fingers in the Cottage Garden on table 3 while Will B. introduced Ganz Schon Clever or Thats pretty clever to finish the evening on Table 2. Ganz Schon Clever is a colourful roll and write game involving dice rolling and selection to create chains, score points, and unlock foxes, but you have to be careful that your opponents don’t make use of your unused dice. 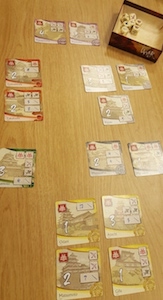 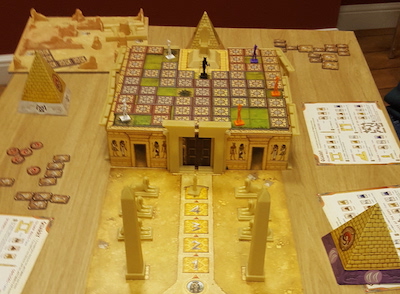 We already have some suggestions for the next session; Terraforming Mars, Robinson Crusoe, Spirit Island, and Eclipse: Second Dawn for the Galaxy. If anyone would also like to try these games or has some counter suggestions let us know on Facebook or Discord then we can try and make the games and players available on the 6th of November. Feel free to bring your own games along, we enjoy trying some new games or just trying a favourite game with a different number or group of people to see how that changes the gameplay.