Thirteenth Session - Back from Lockdown

Live sessions were able to resume on 25th August with a bumper turnout of old faces, new but previously virtual members, and some completely new joiners who had heard about the club and came along to try. The Corn Exchange has changed a little over the last year causing some initial issues with the hot beverage provision, but we managed to get the tea flowing and have some ideas to improve for next session.

With so many players we had 4 tables running for most of the night with a little interchange of players as some games finished at similar times.

Table 4 started with a 4 player session of Clank, a deck building push your luck dungeon raiding game. One player had a surprising run of luck avoiding the dragon that we were enraging by stealing his treasures, but in the end succumbed and had to be rescued by the villagers. This meant that the only player that had managed to get out just won, as the bonus for that accomplishment tipped the balance of their slightly reduced treasure pickup whilst dungeon crawling.

Then we had a slight reshuffle and some extra players joined for a 6 player game of Ecosystem. This is a tableau building game with a “pass the hand of cards” mechanic, where you build a 5 x 4 grid of animals and locations over 2 rounds with 10 cards per round. Each card type has a different way to score points depending on how many or what other cards are nearby, and there is a final diversity bonus encouraging you to place many of the different card types in your ecosystem. It was a popular choice and a fairly quick game so everyone stayed on for another round. 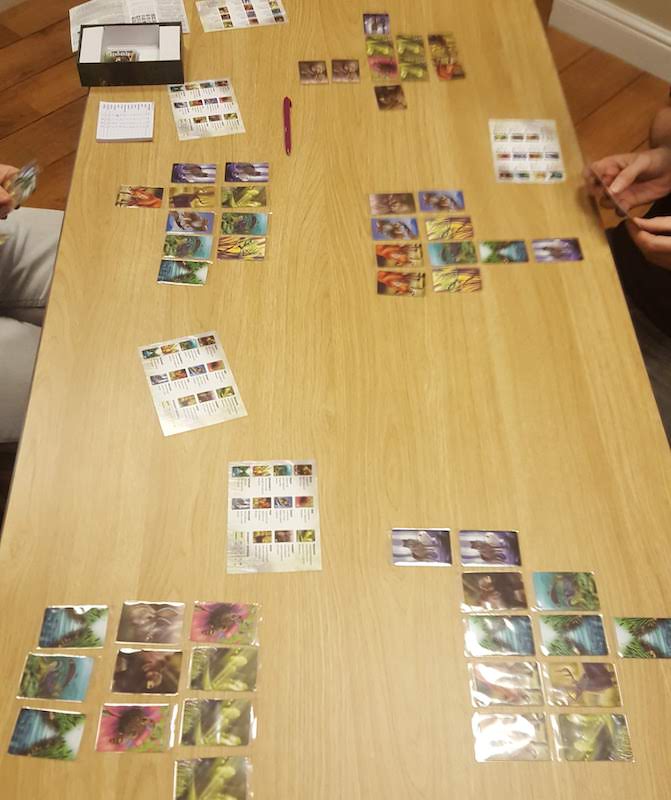 Finally, the table had a couple of 4 player of games of Kingdomino, building magical kingdoms from domino like tiles before wrapping up for the night.

Table 3 started with an older cube rails game, Northern Pacific by Amabel Holland. It’s a route building and speculation game for 3 to 6 players, and we played with the full compliment of 6. Using the Rio Grande version (rather than the original Winsome edition), we played with 4 investment cubes (1 being the big-cube) over 3 rounds. You only have 2 options for your turn, the game is about the interaction between the players with shifting alliances. The 3 rounds are the same, so after the first round people were getting a feel for the shared incentive nature of the game, round 2 bought a few more “oh” moments, and round 3 was perhaps a little more stress inducing than some wanted for their first game. Simon W. was a bad teacher and won the game, but only by 1 point.

There was a decision about whether to split into 2 groups of 3 (since we were out of sync with the other tables) or find a 6 player game, and we opted for 6 player game of 7 Wonders. Thanks to Ross D.’s custom card storage solution, setting up was super quick and we rapidly saw the rise and fall of several great civilisations. 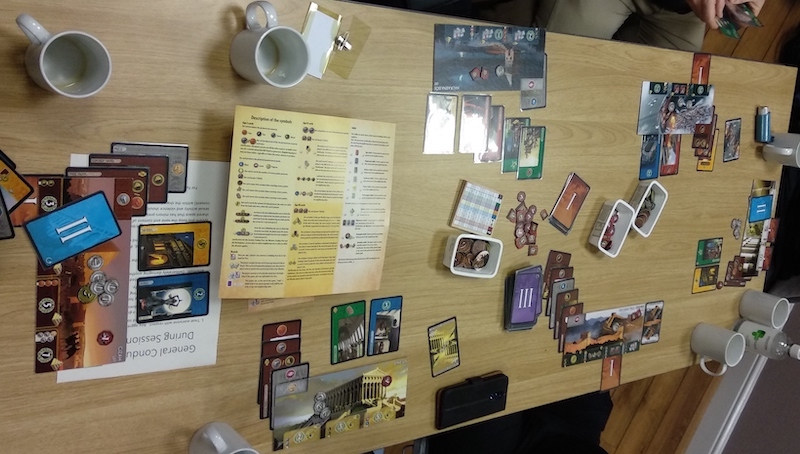 It was getting later in the evening and several of our players decided to switch tables or head home. Table 3 had another mission, in fact a pre-arranged plan, to play Concordia. Simon W. is a bit of a fan, perhaps heavily influenced by the Shut Up and Sit Down review videos (and several that follow where they just keep returning to Concordia). Some might say it is the ultimate realisation of the bland and themeless euro game: Get resources, use resources to generate points, repeat; Where are we doing this, oh Europe circa 200 BC? However, Concordia’s card-based action selection, a civilisation game without any conflict (none, there are no armies or battles, you build trading posts), and the way you’re not really sure who is winning due to the scoring cards make this an amazing game. We setup for a 3-player game, Simon W. joined by another Concordia fan, and a convert from playing online (there is a very good free online implementation we used during our virtual sessions), and at the last minute a fourth player joined us. The game ran a little over the end of the session, finishing perhaps later than the 4 players (and the rest of the committee waiting to close up) wanted, but it was an excellent time. 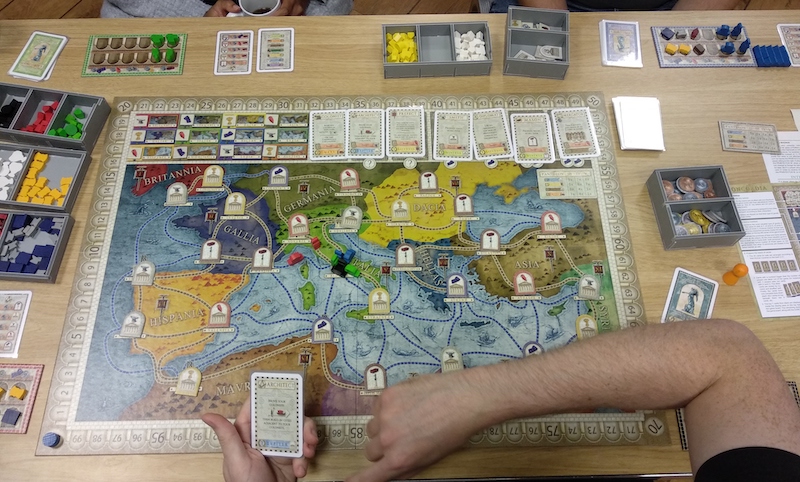 Some of the games played by the other tables included Santa Monica, Isle of Skye, The City, and more Ecosystem and 7 Wonders. 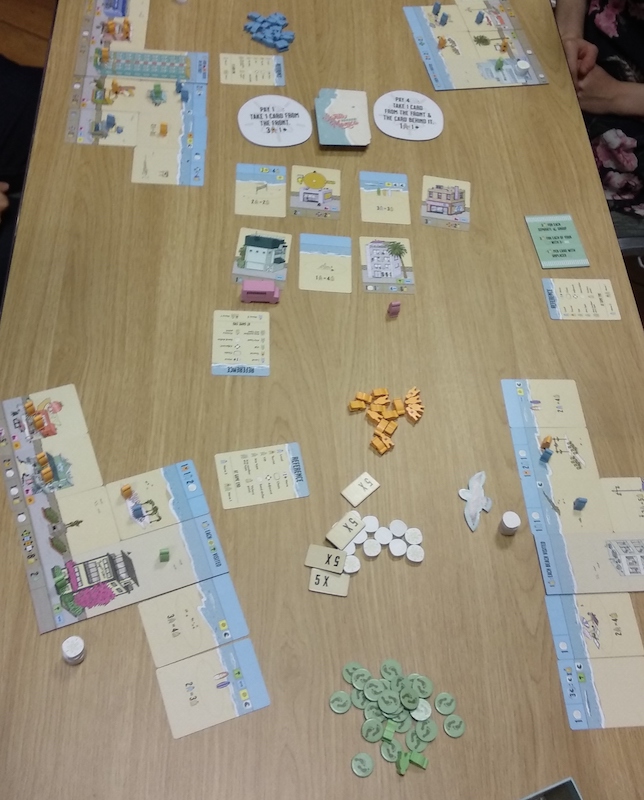 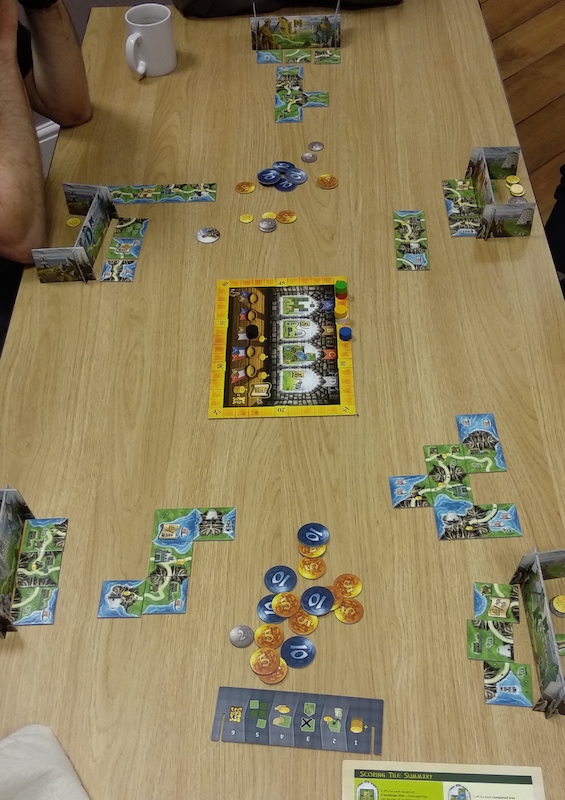