It was the fifth St. Ives Tabletop session and we had another good turnout, despite missing 2 of the committee members, with 11 attendees in total and 1 new gamer. Due to the shortage of committee members, we decided to focus the session on board gaming and not to run a RPG table. That gave us 2 tables over the course of the evening with firefighting, fortune telling, kingdom building and terraforming!

This week saw the first longer game played at the sessions, as 5 people sat down for a game of Terraforming Mars (vanilla with no expansions) led by Simon W. With 2 ‘experienced players’ and 3 first timers, the rules explanation took up a bit of time - but for games like this you need to know how the final scoring works to have any appreciation for the types of actions within the game. Before we started, there was one last thing to decide: What type of corporation to be? The 3 new players, on advice from the teacher, took ‘Beginner Corporations’ while the more experienced players drafted corporations - the new players immediately appreciated having to not pay for their starting cards. Once the game started everyone got into the flow very quickly, we didn’t use the research draft variant (slows things down on a first play). The more established corporations looked on with amusement as the new kids set off nukes and crashed asteroids into Mars, building cities and breeding animals. 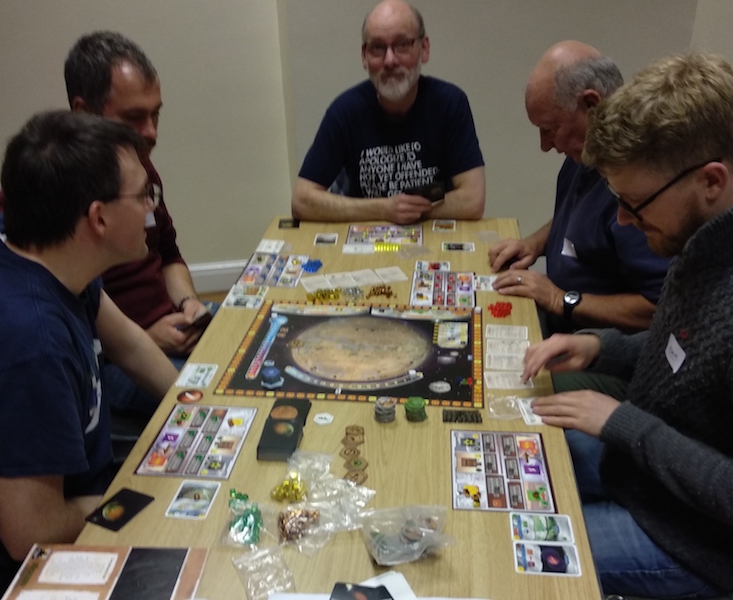 Different strategies began to emerge, but for some reason there was very little water on Mars. The red planet grew warmer, greener, and more breathable - but the oceans delayed the end of the game. By the end of the game the surface of Mars was entirely transformed, and the final scoring began. It was right at the end of the session, so a small audience gathered to see the scoring markers jump and shift as the awards, milestones, cities, forests, and finally the cards were scored. Really good scores from everyone, the 3 new players enjoyed exploring the game and hopefully we’ll see it on the table again sometime soon. 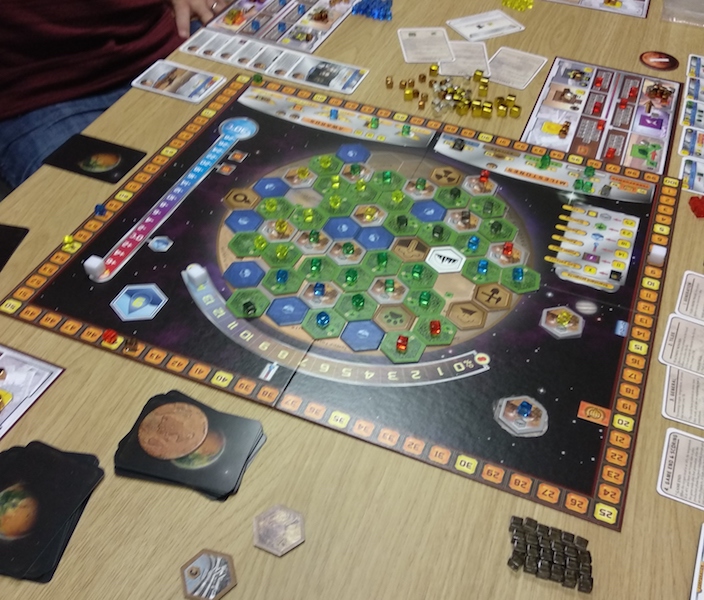 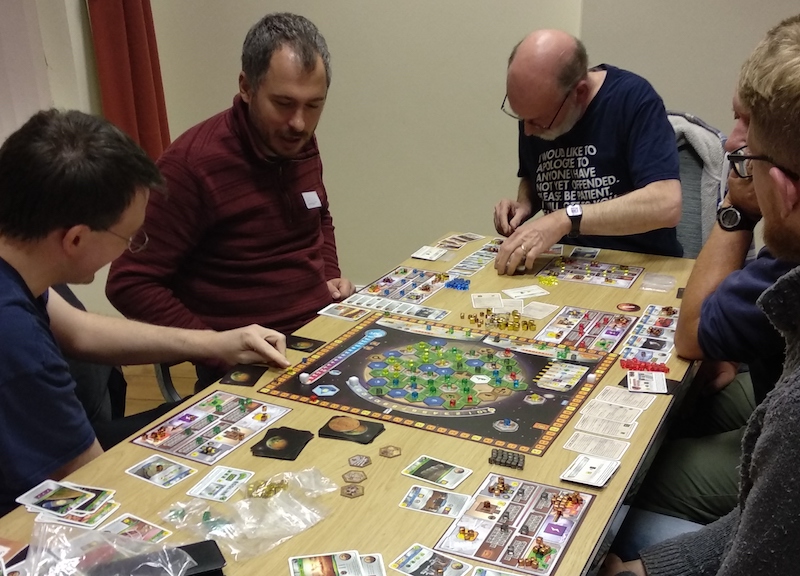 Meanwhile, the other 6 players started with a game of Flash Point: Fire Rescue led by Ross D. In Flash Point you form a firefighting team and work together to keep a blaze under control and rescue people and pets from the building. We decided to play with the Tragic Events expansion, which adds random events to the game, and resulted in the Fire Captain (Ross D.) running around in a panic in a continually smoking room, while the rest of the team disposed of hazmats, put out fires, and rescued people as they were supposed to! The team won (rescued 7 people) but decided to continue playing and the building eventually collapsed around them… 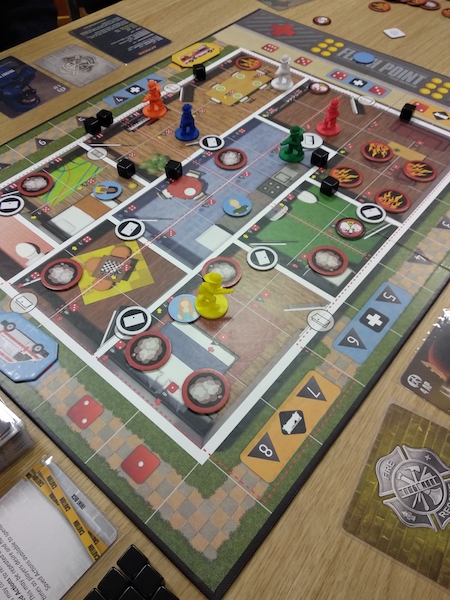 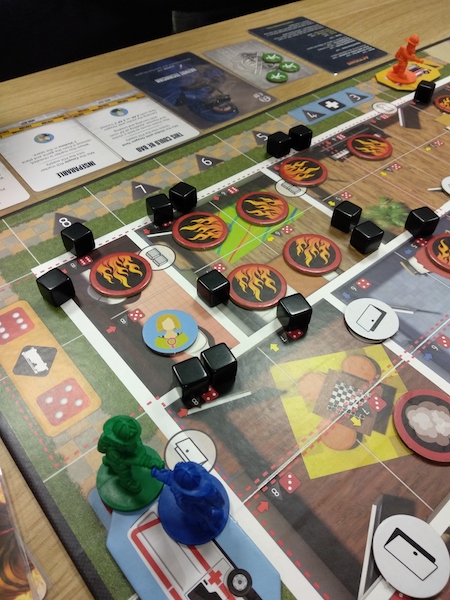 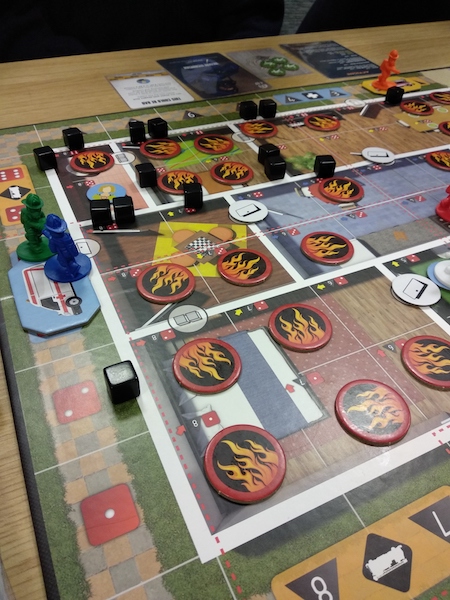 After a tea break, the 6 players continued with another cooperative game, The Shipwreck Arcana, a beautifully illustrated card game of deduction. With a good dose of logic (and maths!) the group successfully managed to predict each other’s fates leading to another win. Finally, with 2 people heading home, Catherine D. led a 4-player game of Kingdomino, a kingdom building game where each player claims and lays dominoes of different terrain types, gaining victory points for those terrains containing crowns. In the end victory went to the kingdom with a large lake that was home to the Loch Ness monster! 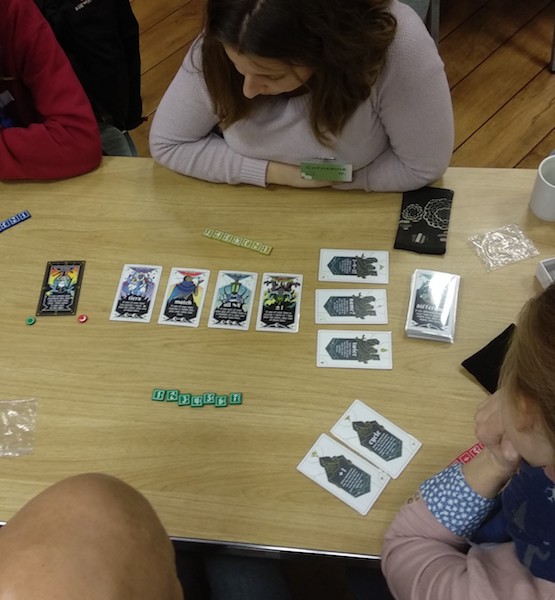 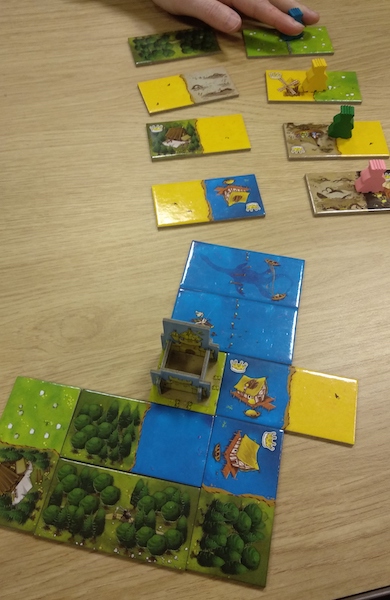 Please let us know if you have any suggestions for games to play at the next session on 20th November. We have already had a request for Robinson Crusoe, a game of survival after shipwreck on a deserted island. Find out what to expect in this funny musical youtube video – spoiler, it doesn’t normally end well! We are also planning to have a RPG table running again and welcome your suggestions on that too!