With fewer committee attending we asked for attendees to run more games and basically make this session work. Our youngest committee member was there at the start, but she seemed more interested in climbing the stairs and had to go home for her bedtime. Thankfully our amazing members made a brilliant session. So let’s kick the tires and light the fires¹ on this session report.

We had 13 attendees over 2 tables. Seven different games were played, three making their first appearance and a couple of returning favourites. 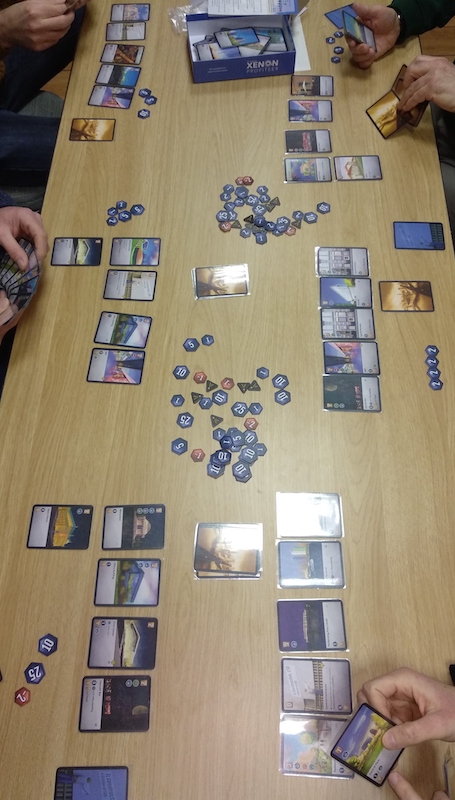 The first table of 6 sat down to play The City (last played in Session 14) using simultaneous card selection to build a tableau and race to be the first to get enough points (played with the expansion which increases the maximum player count from 5 to 6). Rather like many great card games, after you’ve played once you might as well play again, and the table had another game. 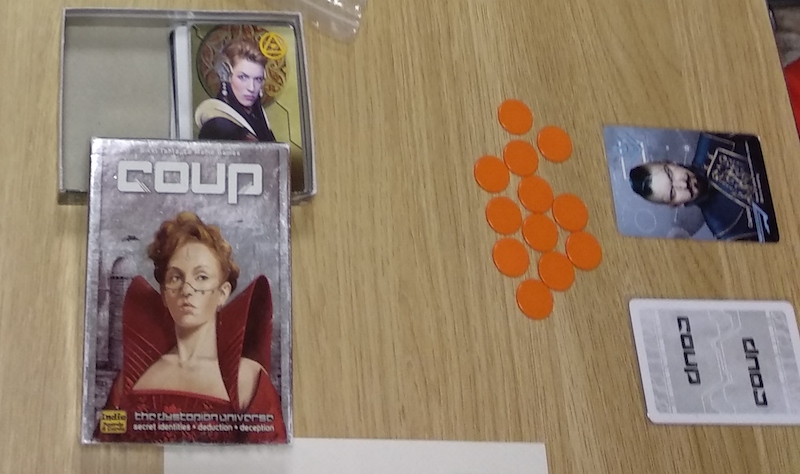 At the same time, a game of Coup was started with 6 players. This is new to the in-person sessions, but we played this a few times in the virtual sessions on Board Game Arena during 2021. Coup is a hidden roles game, each player plays role cards with various abilities and the last person standing wins. In this game you don’t want to find yourself facing fire² from the assassin, unless that’s part of your plan to trap your opponent and then “remove” them. There’s an aspect of trying to guess what the other players are doing, what role they have in their hand. In some ways it feels similar to Love Letter. 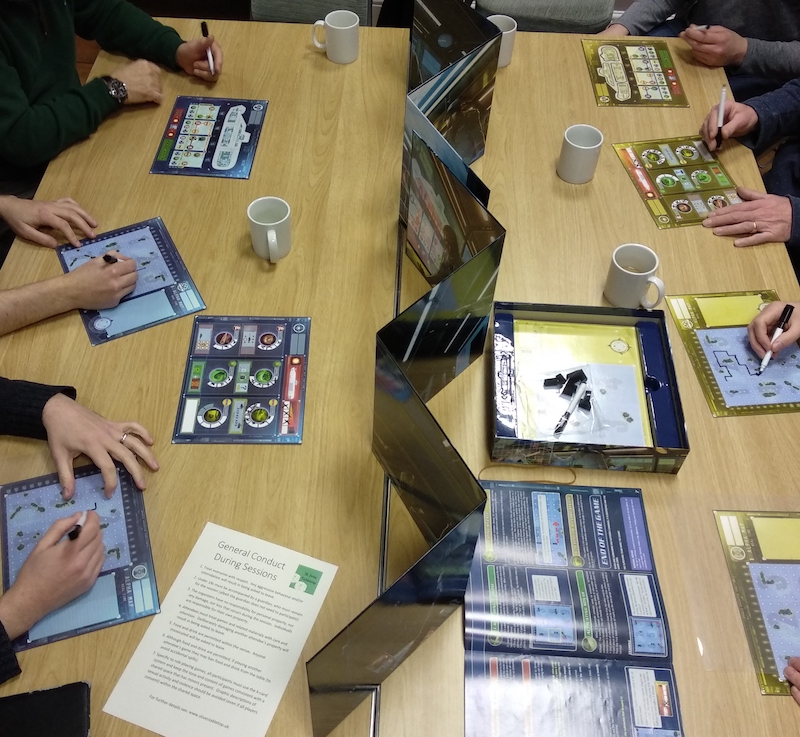 While the other table were backstabbing and assassinating in Coup, James T. had brought along Captain Sonar - essentially a multiplayer version of “you sunk my battleship”; except this game is all about submarine combat. This is a team game entirely new to the Club and 7 players split into 2 teams of 3 versus 4, each team operating a single submarine. I think the teams had colours but things quickly transitioned into The Hunt For the Red October (sadly no Sean Connery Russian accents were deployed); some of you may think of Crimson Tide as your go to submarine film but that is wrong (obviously the best submarine show is SeaQuest DSV). Captain Sonar is a real-time game, there are no turns. Each team’s captain shouts out the relative movement of their submarine, the opposing team’s radio operator is listening and trying to find them on a map. The engineer is keeping the scanners and the weapons on line so that every now and then the captain/first officer can stop play to shout “FIRE!”³; torpedoes streak out into the deep blue sea and detonate… giving a direct hit, a glancing hit, or a miss. How did we miss, they had to be there. Then the opposing captain looks you dead in the eye and shouts “FIRE!”, they’ve used our failed shot to hone in on our position - “You arrogant ass. You’ve killed us!”. The game is fun, but also stressful. Real-time games often have a frantic quality: The noise, tracking things in real-time, and interruptions to shoot or use the sonar to track each other. After a tense battle the table played a second game, swapping members of the 2 teams. Two games was enough stress for one night. 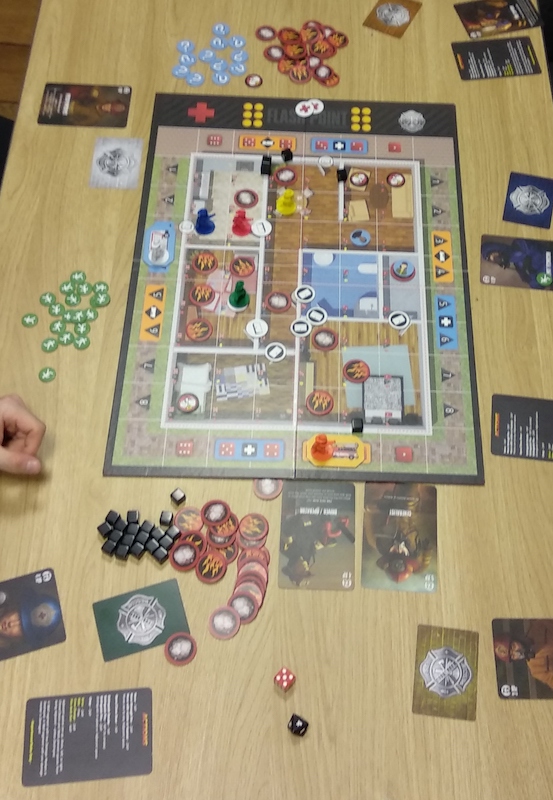 While the Captain Sonar table of 7 were trying to sink their respective submarines, the other table of 6 were getting a little hot. Too hot. That hot spot might flare up and that means… fire!⁴ By which I mean they had moved on to the excellent co-operative game Flash Point (last played in Session 5). Although rather standard in it’s approach, each player has a fire fighter with a special ability and a number of action points per turn, the theme of this co-operative really works well. Each turn involves good things: Putting out fires, saving people, smashing through walls; and bad things: The fire spreads, and sometimes explosions. There are lots of expansions with different buildings and new fire fighters, it’s a really clever and clear example of the genre (Pandemic being the classic of this style of game). After their first emergency call, the team went right back to another and ran bravely into a second burning building to save lives; every one of them a hero.

After the stress of sinking submarines one of our number headed home, for the 6 remaining players it was time to stoke the firebox⁵ and steam across the Northern Pacific (last played in Session 13). A simple game where you only have 2 options on your turn: Extend the railway, or invest in a city. Investments pay back if the railway passes through that city… otherwise they sit on the board lost. The game is played over 3 rounds with the cumulative highest score winning. Despite the simple rules, the game is driven by the players making temporary alliances and working together (for a short time) to better their position relative to the other players. For fans of Amabel Holland’s games, this is one her classics from Winsome Games (see also Irish Gauge).

With Northern Pacific finished it was getting late and the table reduced to 4 players for a game of China, a reskin of Web of Power (recently re-released as Iwari), new to the Club in any of its forms. An area majority game with simple rules but obscure scoring, will you become the new Emperor or watch your hard work turn to ashes⁶. There are 2 types of pieces that score points in different ways, and understanding how they interact is key to winning; that and keeping a careful eye on what the other players are doing.

Somewhere during the evening there was a quick 4-player game of a staple of the Club, 7 Wonders (last played in Session 16, it was due another outing). There’s not much to say about this game, a brilliant simultaneous card selection game that readily scales to a range of player counts.

At the end I’ve managed to slip 6 references to the post’s title into the text; we all need our little hobbies. The Club’s next session will be February 9th. Contact us if you have any suggestions or requests.