We had 12 returning gamers attending the session, giving another evening with 3 long games active with 4 players each. Everdell was out again for the fourth session in a row, joined by Pulsar 2849 and Nicaea providing an extensive range of gaming styles and themes.

Initial games this session were Hanabi and Braggart, again with very contrasting themes, a cooperative firework display and competitive tales of adventuring bravado. Both games have been out at the club before but not for a while (Sessions 3, and 6) so it was nice to introduce them to some new gamers, and get everyone warmed up for the main action. 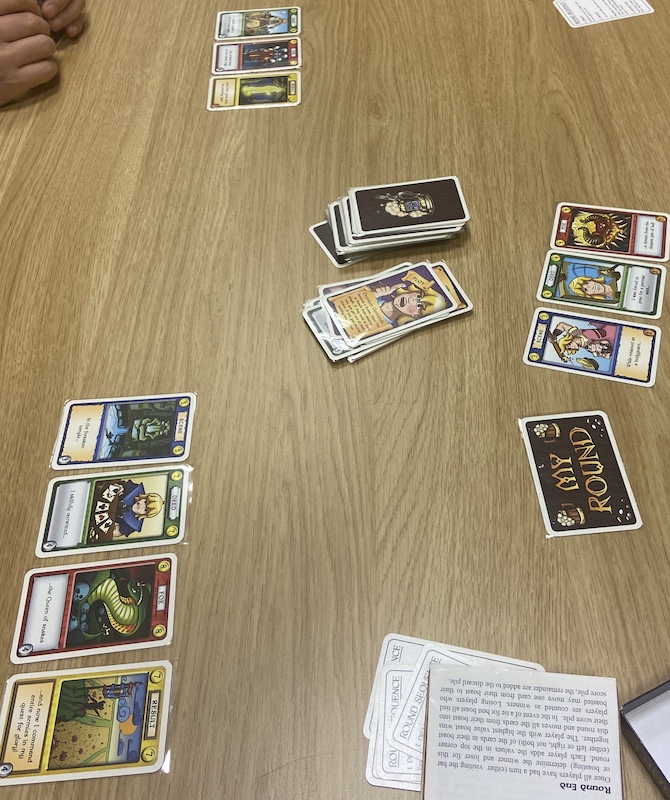 Braggart is a card based story telling game. Two cards (a deed and a foe) are required as a minimum to tell a story, but it can be embellished with a scene and a result. All cards have a value based on how impressive a tale they make. Other players can then challenge this story, and swap cards to make it rather less impressive, for instance the fight was not with “mysterious creatures from beneath the desert sands” but rather with “a tribe of peaceful fairies”. The best scoring story each round keeps all the cards, and hence their points, while everyone else keeps one card. It is very simple to explain and possible to have others join in part-way through. Everyone agreed it was more fun telling or changing the silly stories than scoring the points. 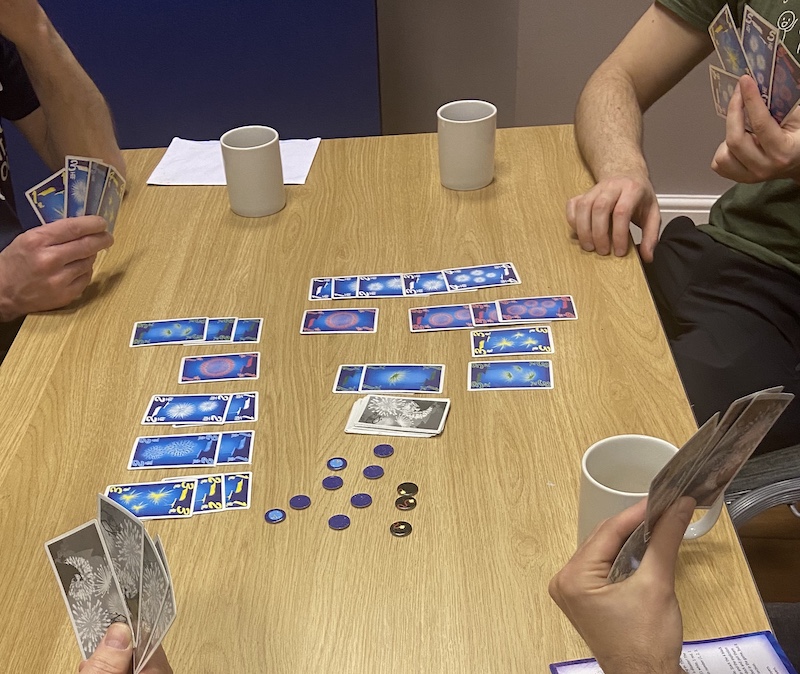 In Hanabi players need to stage a firework festival playing cards of 5 different coloured firework effects in numerical order. It sounds simple, but there is a catch! You cannot see your own cards, and so the other players must use the very rationed clue tokens to help you out and to indicate without speaking beyond the colour or number of the cards in your hand what you are holding. A perfect display fit for the emperor scores 25 points if all cards are played correctly. 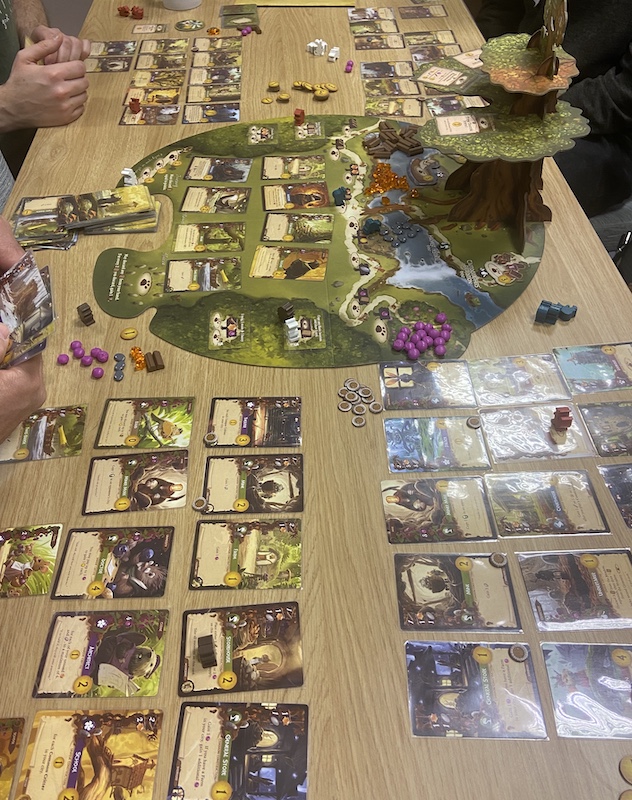 Everdell was back! There are still plenty of members yet to gain a seat to try this popular woodland worker placement and tableau building game. This has made it the first club game to manage 4 consecutive outings on the tables. 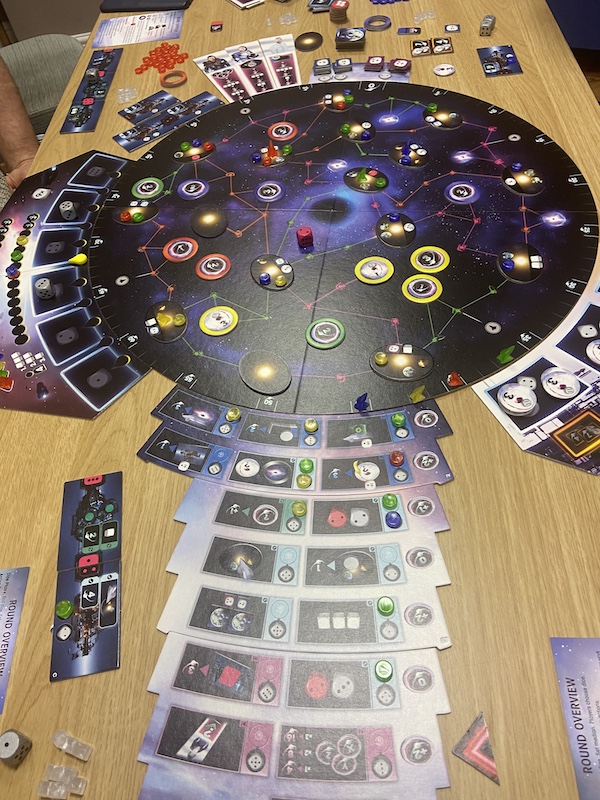 Rich W. had brought along his brand new copy of Pulsar 2849, and so after we helped unbox it and pop all the components out of the cardboard inserts, space ships set out exploring the star system. The game has fairly simple mechanics, but a number of ways to score victory points. In each of the 8 rounds players choose 2 dice, the numbers determine which actions on the boards they can then do. Do you fly your survey ship and explore planets, develop a pulsar, build a transmitter, or patent a technology? There are also some common goals for additional end of game scoring. With only 2 actions each round acquiring extra actions, skewing turn order in your favour or being able to modify the dice result are critical for success. The scores were quite tight until the final round, first and second place were quite close and taken by the best explorers, with the other 2 players that had focused more on pulsars and transmitters lagging a little behind. With interchangeable board pieces to change the scoring options each game it has a lot of replayability and perhaps different strategies would prevail. 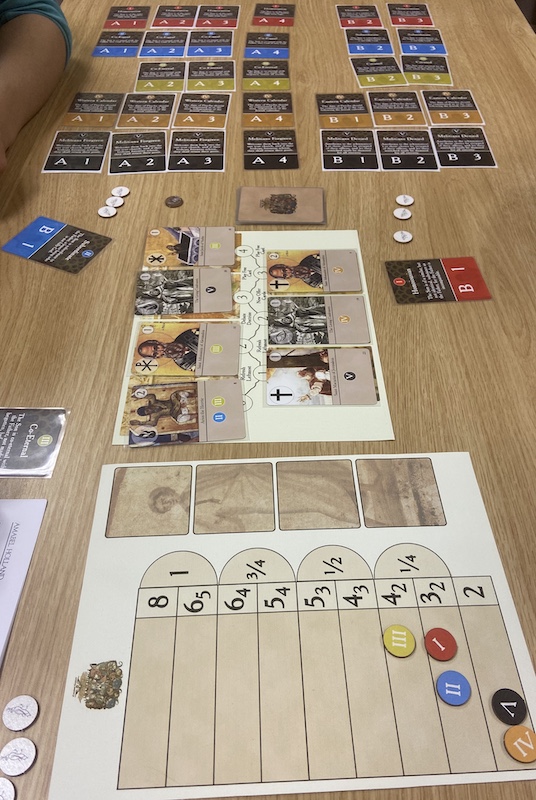 The final table had a bit of a debate over which of Simon W.’s many and varied games to try, and in the end Nicaea, a game about debating, won (oh the irony!). It is the year 325 and the leaders of early Christianity have gathered in Nicaea with emperor Constantine to agree some theological rules; well that’s the theme but the game is all about shared incentives. There are a series of debates, if you are on the winning side of the argument you score points, so pick a side and try to swing the discussions in your favour. Although rather simple rules, it took most of the game for the sequence to become clear, and then to see what players can do to influence their chances of winning. It is a tongue in cheek game that had some of the other tables quite intrigued as what was going on as they overheard snippets of the debates. 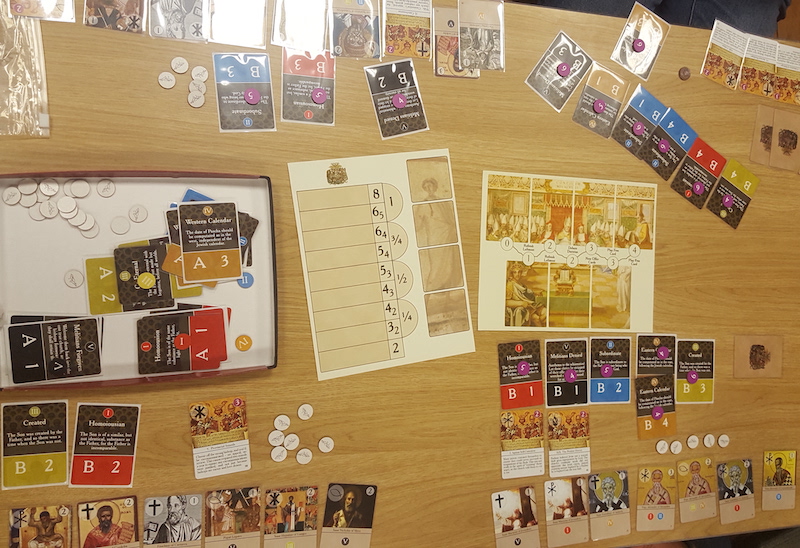 Nicaea ended first giving that table time to play Star Cartel, a black market in space delivery and contraband stashing game with goods changing prices over the course of the game. Sadly after expending all his brain on Nicaea Simon W. managed to get one of the rules wrong, not that it hurt this filler stock speculation game that much. You collect cards for 5 types and then deliver sets of cards, the ones you sell change the market value of those goods (up and down), but you stash 1 set (that you don’t deliver) for your end of game scoring. Sell too much of one thing and the market crashes back to almost nothing.

Gaia Project had been active in a turn based Board Game Arena (BGA) game in between session and it looks like another game is due to start. On most in between Wednesdays a few members are available on BGA for some virtual but real time gaming if you can’t make it to the in person sessions. Look out for the posts on Discord to join a virtual session with voice chat. As always let us know which games to bring along next session, which is on Wednesday 6th April.