It was the sixth St. Ives Tabletop session, with 11 attendees in total and 2 new gamers. Some of our avid RPG crew were unable to come so instead 3 board game tables were set up, one with the infamous game Robinson Crusoe as requested.

Robinson Crusoe: Adventures on the Cursed Island is a co-operative board game of survival on a notoriously dangerous deserted island. It is a long game and quite rules heavy - so perfect for people to try at the club where we had 2 experienced players (Simon W. and Kathy J.) teaching 2 new players. After a brief rules summary, the 4 characters (explorer, soldier, cook, and carpenter) started exploring the island and the trials began! The first challenge was finding enough food to survive night 1 on the beach, before the team could start trying to locate enough wood for a shelter and a log pile. The log pile was the ultimate objective, a 5 tier pyre to attract a passing ship by day 10. Things started badly and by day 3 the party were all already half dead, but a good campsite inland had been located and, with the help of a pistol that had washed up on shore, hunting commenced. More food and fur from the wild beasts improved morale and explorations continued. Some lucky treasure finds and inventions helped keep the party going, although there were some close calls with cursed gold, increasingly inclement weather, shoddy building materials, and a tiger following the explorer home! Finally the pyre was finished just as it reached night 9 and the island wood and food supplies were becoming depleted - overfishing by the local otters! So all 4 were rescued and even achieved 53 points based on items built and health remaining. There is another crew of adventurers keen to try next session so we will see if they fare as well. 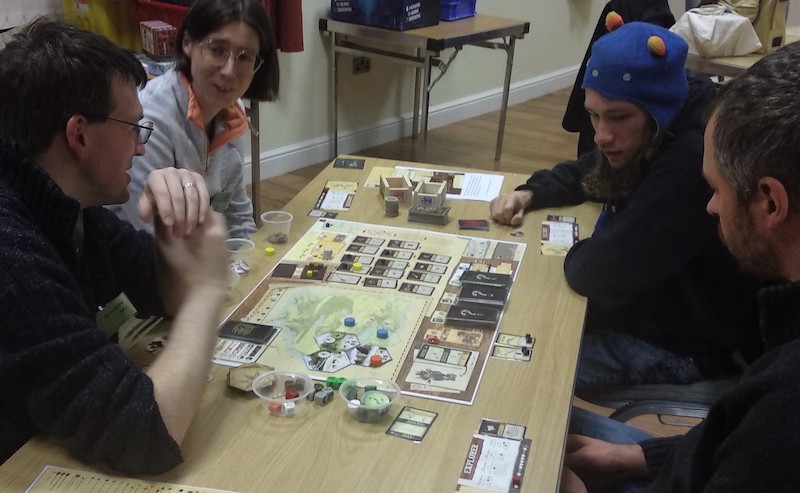 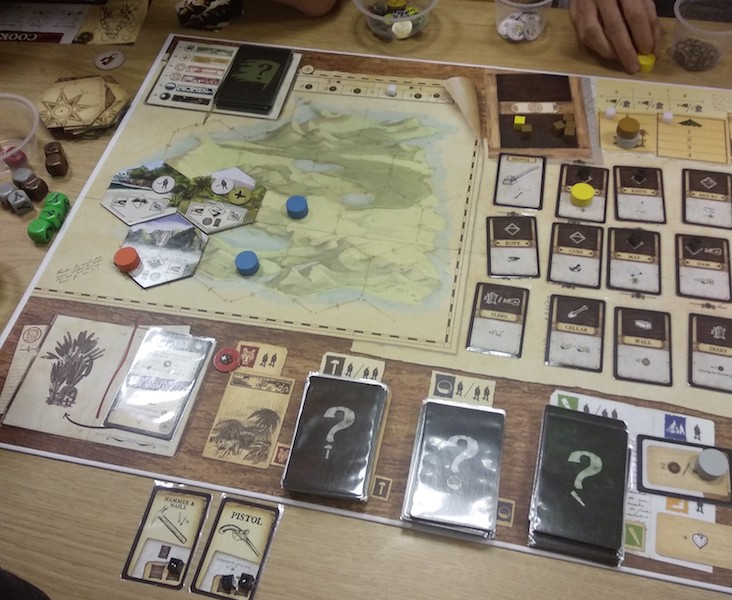 The next table started as a 5-player game of 7 Wonders, a card drafting game played over 3 ages with each player developing one of the Wonders and scoring points in a variety of ways based on military, science, guilds, or commerce. Things went rather well for the 2 new players to Wonder building as they completed The Great Wall of China and The Lighthouse of Alexander with some “minor” escalation of armies! A returning player managed to just beat them building an empire and Stonehenge, whereas the 2 seasoned players struggled to get enough points building The Mausoleum at Halicarnassus and the special Wonder Manneken Pis. 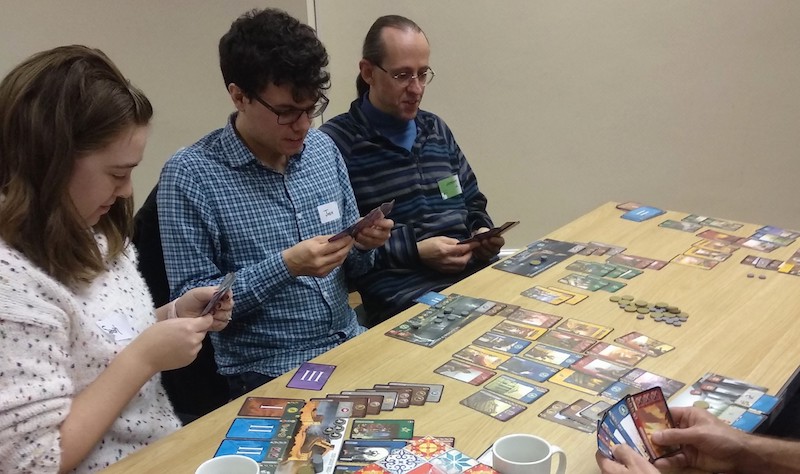 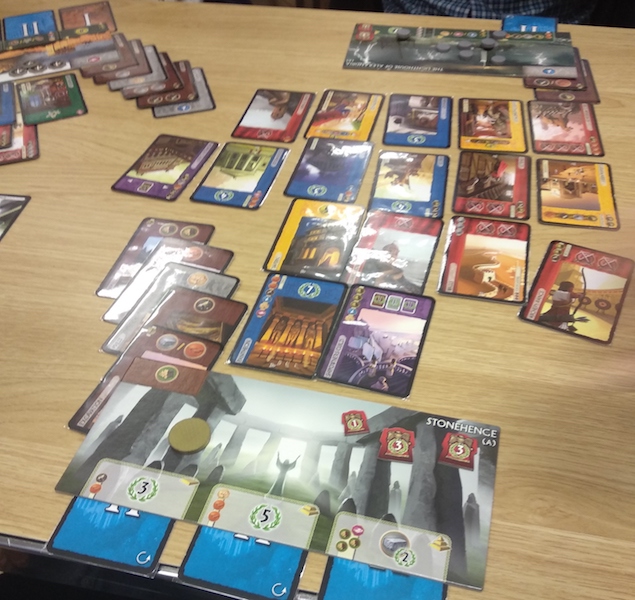 Meanwhile, the final table (Ross D. and Catherine D.) tried a 2-player game of Hanabi. This is a co-operative game to build a fireworks display of a series of coloured cards of increasing value. The twist is that you can’t see your own cards and instead can only be given clues of either the colour or value of cards in your hand. Despite some (marital) miscommunications, the game ended with an “extraordinary” (23 point) firework display. 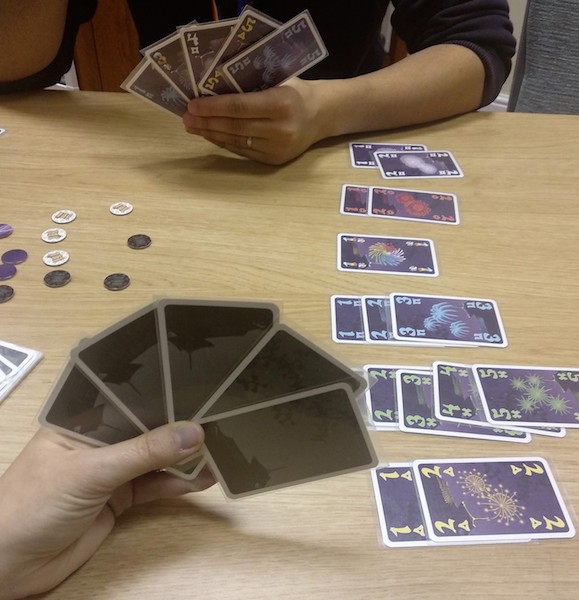 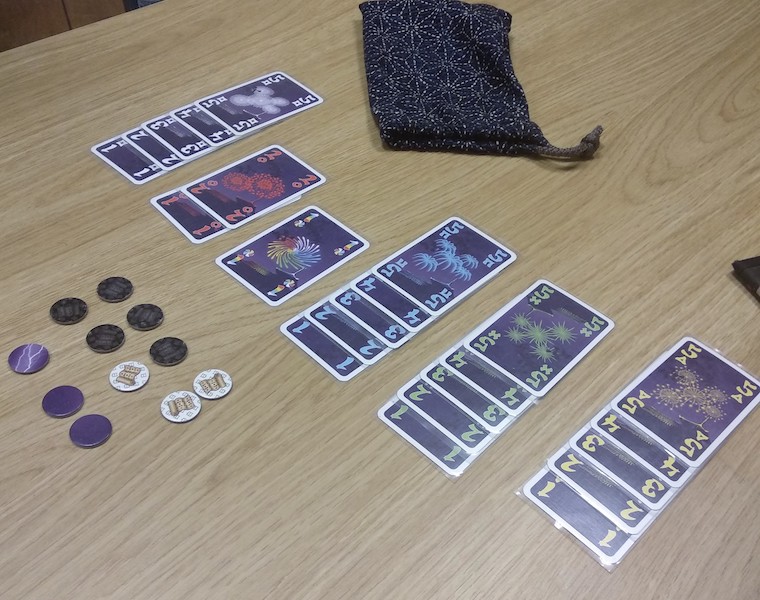 It was then tea break time and the 2 tables chose new games and readjusted members leading to a 4-player game of Azul (so popular that 2 people had brought it along!) and Burgle Bros. But there was no tea break for the island adventurers as they were still struggling to create their bonfire!

Azul is a game inspired by decorative Moorish tiles like in the Alhambra palace in Spain. In the game players draft coloured tiles and then score points by placing them on their player board, with patterns and sets scoring points while wasted supplies lose points. Wasted supplies can occur as you have to take all of the tiles of the same colour even though you may not be able to play them all. In the middle of the game it didn’t go to plan for some of the players, and there were many penalty points accrued, but in a surprising turn of events the player who lost the most points (over 30) still managed enough combos to come a close second! 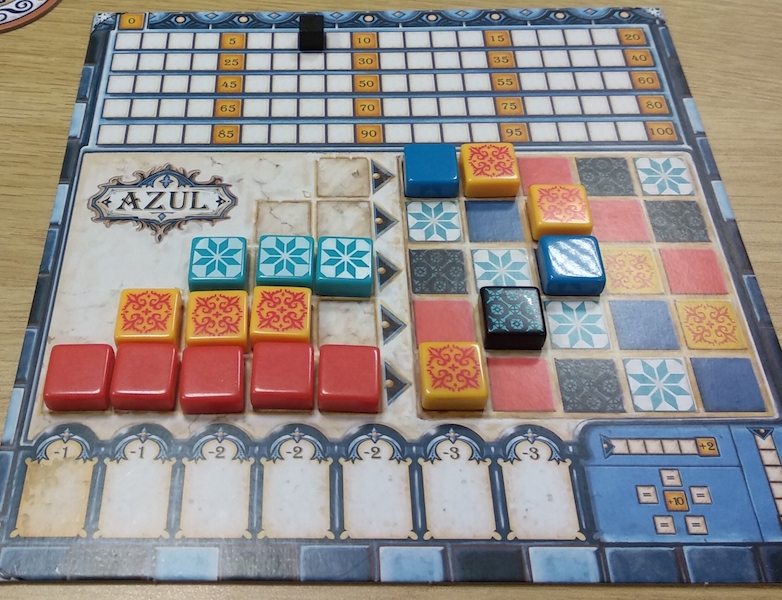 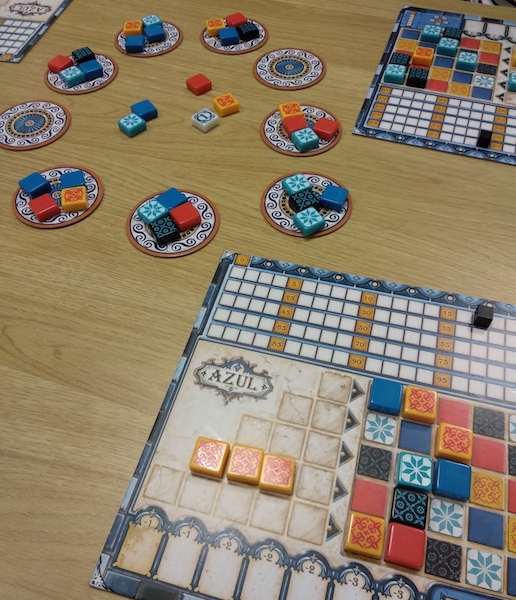 Burgle Bros is another co-operative game. The aim is to rob a 3 storey building with safes on each floor, stealthily crack all the safes and escape via a helicopter on the roof. Led by Ross D., the group played 2 games but unfortunately both times were caught by the guards and didn’t get away with the loot!

Finally, there were 2 short games to finish the session for those who could stay a bit later. The Shipwreck Arcana had another outing with 4 players trying to give mathematical clues to guess the hidden fate numbers, and even though one of the clue cards got stuck with a fate so it couldn’t fade, they managed to beat the doom clock. 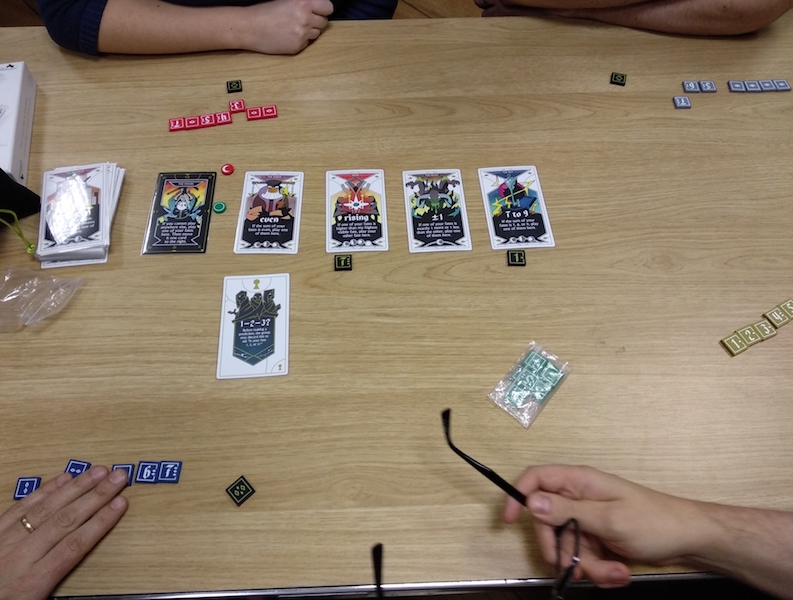 Meanwhile, a 3-player Deep Sea Adventure got underway, a dice based game where you have to push your luck to try and grab the treasure and get back to the submarine before the air runs out. 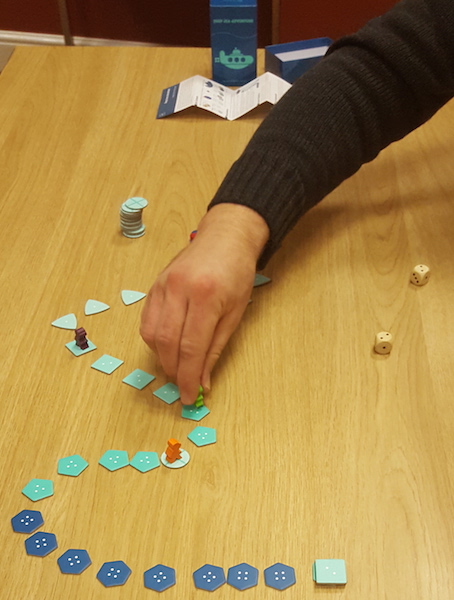 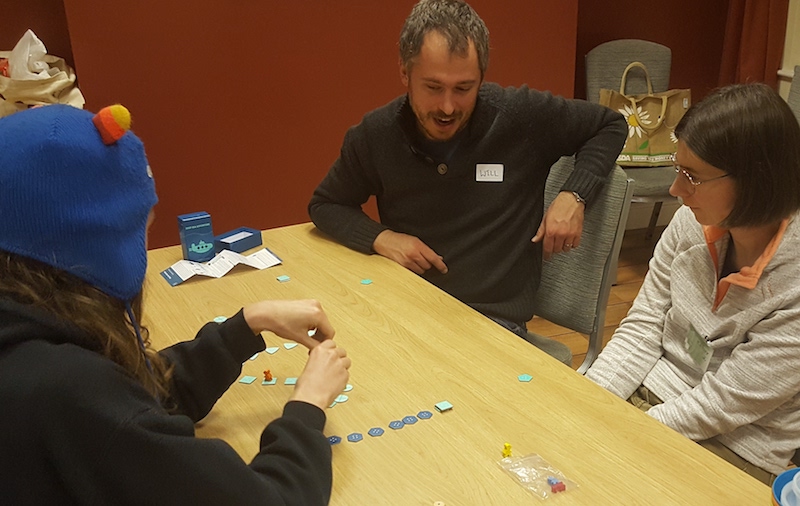 As mentioned above Robinson Crusoe is likely to get another outing on the 4th of December but do let us know if there are any other games you would really like to try or enjoyed playing at a previous session and want another play of.