Eighth Session - Spirits, Ghosts, and Things that Go Bump in the Dungeon

It was a good start to the New Year despite a few members falling victim to the seasonal bugs. We had 11 gamers, all returning members, with games involving an island of spirits, clanking in the dungeon trying to steal a dragons treasure, and a city surrounded by ghosts.

We started with a 5-player game of The City, a nice short simple game to get us going until everyone had arrived. You build a city by placing 1 card each round depicting a building by discarding a set number of cards from your hand as stated on each card. Then you count up all the icons on your placed city cards letting you pick up more cards and victory points. There is a bit of luck in what cards you pick up but you can generate some nice complimentary effects between the building cards. The game ends when the first player(s) reach 50 or more victory points; the trick is in building your city to generate the right mix of new cards and victory points. 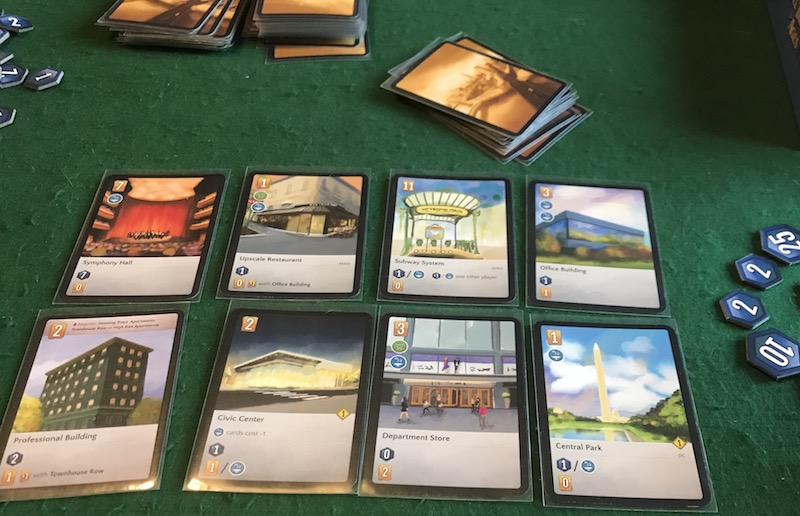 Then we split into 3 tables, 4 people starting a Blades in the Dark RPG, 4 playing cooperative game Spirit Island, and 3 playing Clank.

Kathy J. taught 2 new players Clank (A deck building adventure), which is a push your luck deck building game. Players are thieves delving into the rooms and caverns below a castle seeking to steal an artefact and get back out again. The problem is a dragon lives down there and he doesn’t take too well to people stealing from his hoard. The dragon is attracted by noise or “clank” that you make as you move around and hurts you if he catches you. The best loot is deeper down the dungeon which means more opportunities to make clank. All players start with the same 10 cards that let you move, fight, and/or buy new cards. Each round you draw 5 cards and explore the dungeon picking up small treasures and the artefacts. As your deck is depleted it is replenished from your shuffled discard pile so the same cards will keep recurring. The aim is to build a balanced deck, avoid making clank, steal as much as you can, and get out alive. The 2 new players enjoyed the game and learning a new game mechanic, and so this should be getting another outing in the future to try some of the other dungeon layouts and card combinations. 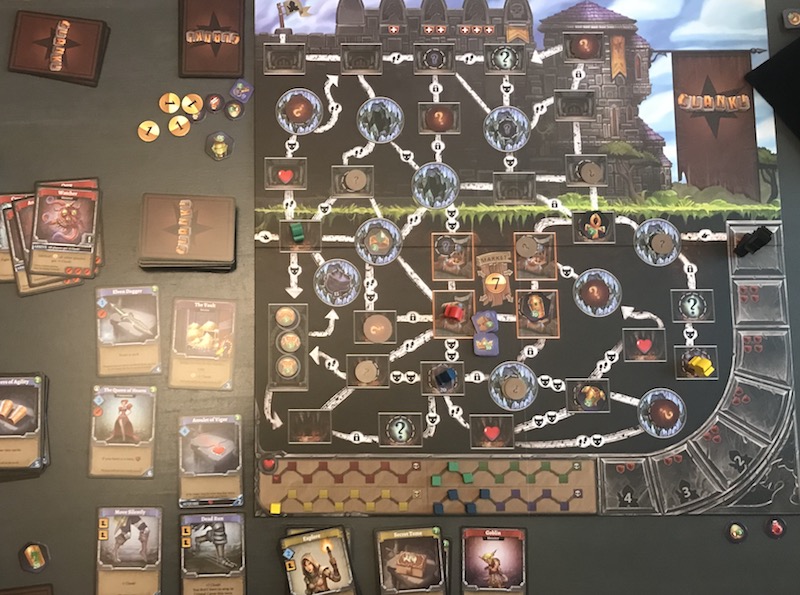 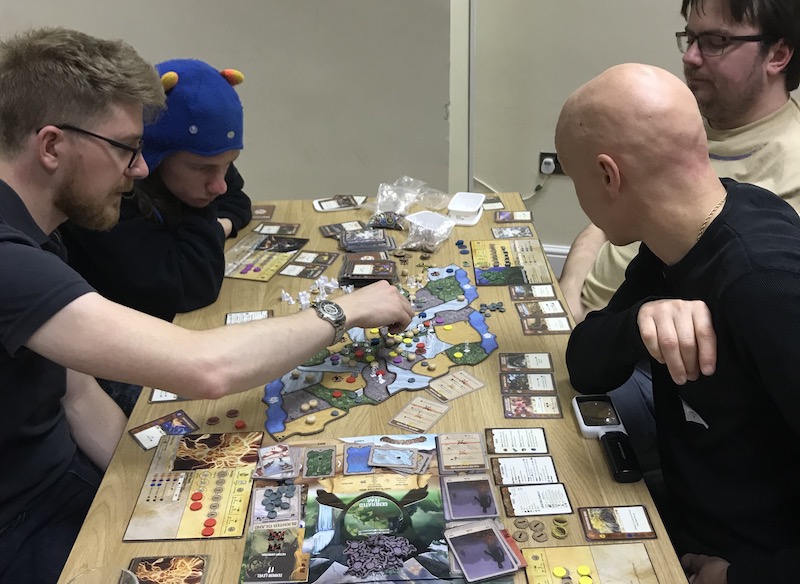 Ross D. started up a role playing session based on the Blades in the Dark rule set. It is set in the city of Doskvol after a cataclysm has altered the world causing the gates of death to be broken and vengeful ghosts and demons roam the lands. They are only kept at bay by electric towers fuelled by Leviathan blood! The session began with the formation of the cult of the Phantom Menace and revolved around 3 members - Wyrm, Smook and Flint - trying to perform a sacrifice to bring about a new ghost into the world. It involved deception, shoot outs, bonfires, and an escape through the streets of the city - read more here. 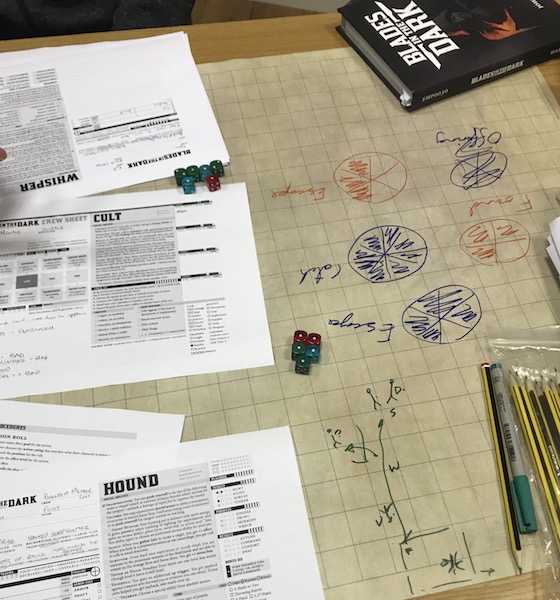 Whilst the RPG and Spirit Island games continued, the Clank table switched to Roll through the Ages, which is similar to Yahtzee with dice rolling and trying to acquire good combinations of die icons to feed, grow, develop or build monuments in your bronze age cities. Then the other tables finished and they were joined by 2 more for another quick round. Graham quickly mastered the development aspect of the game bringing about the victory condition of first to 5 developments and also in causing pestilence (or negative points) to his opponents. 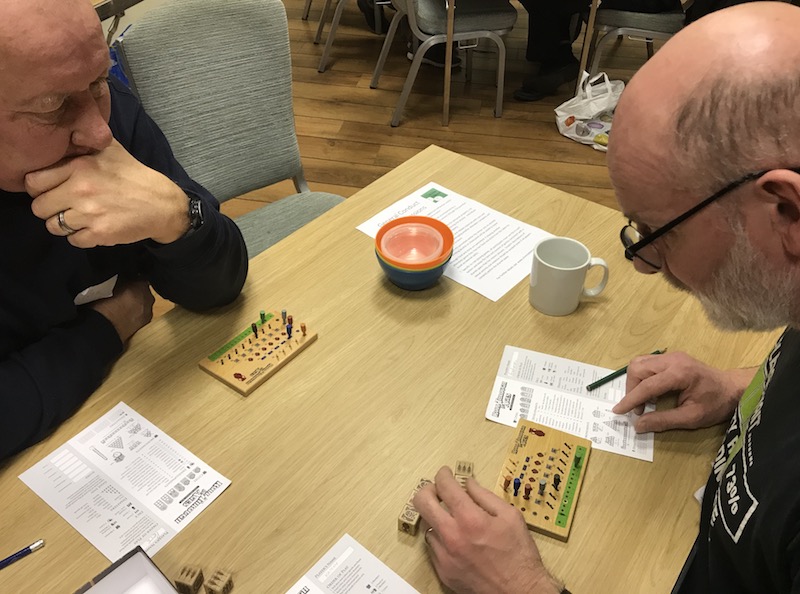 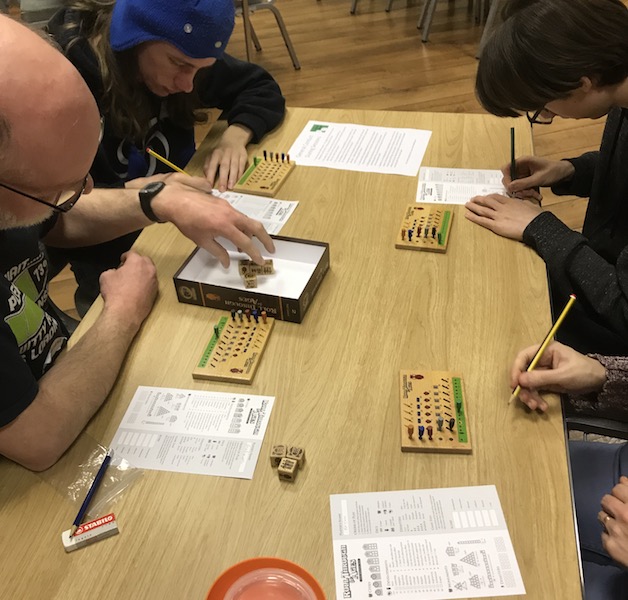 The next session is 29th January and the committee will be a little depleted due to unavoidable non-gaming activities, so if you have suggestions of games learnt in the previous sessions to play again that need less teaching input then we will try and bring them along. Contact us on Discord, Facebook, or Twitter.