This was another session with 2 pre-booked long games and another long game chosen on the night. In the end there were 4 tables active with 17 participants (including 1 new), which had either an area expansion or deck building mechanic. 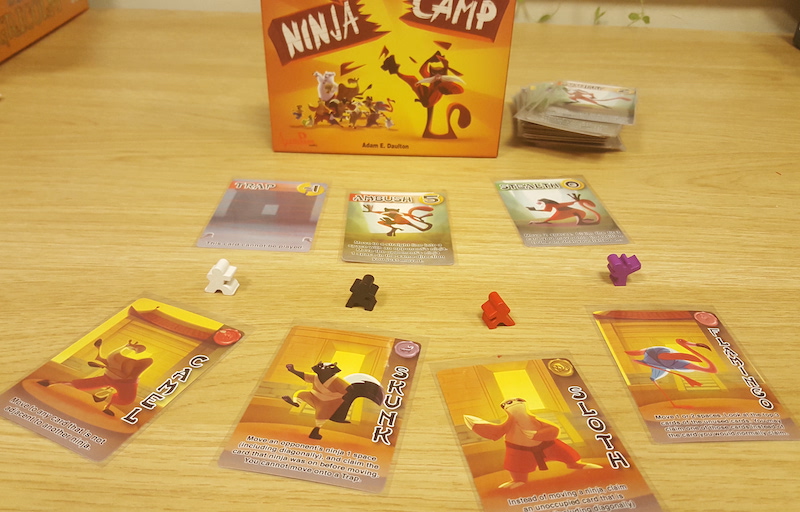 High Society and Ninja Camp were the short starter games for a couple of tables, back for a second play at the club but from sessions 39 and 11 respectively. The first is a bidding and bluffing game trying to acquire the most wealthy artefacts without spending the most money. The second involves a grid of cards of different ninja skills and traps. When your ninja leaves the card you collect it, so you can play the skill later and leave a gap in the tableau. Use the skills to best advantage to collect the highest scoring cards, avoid the traps, or force your opponents into them or into a dead end as the tableau clears. Add in a range of different ninja animals and one-off skills and this is a simple, fun but quite strategic little game. oth were quite quick games and the tables managed 2 rounds each before deciding on which long game to join. 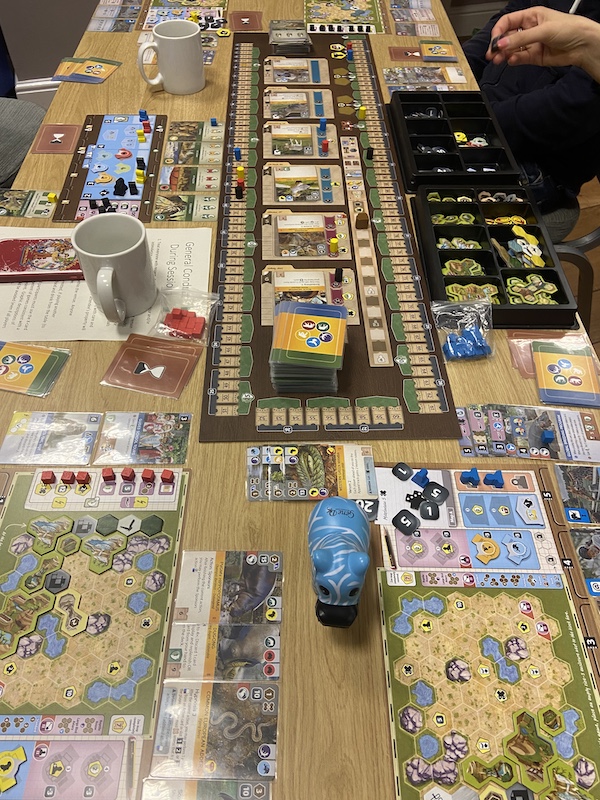 Ark Nova was back again from session 40 but with just 1 new player this time, so it finished at a more respectable 10.30pm. This time the winning zoo focused on monkeys and American animals and got lucky with some compatible conservation cards coming up. The second placed zoo focused on animals that liked water due to a final point scoring goal, whilst the other two zoos had equal final scores and a range of animals or continents and special enclosures. 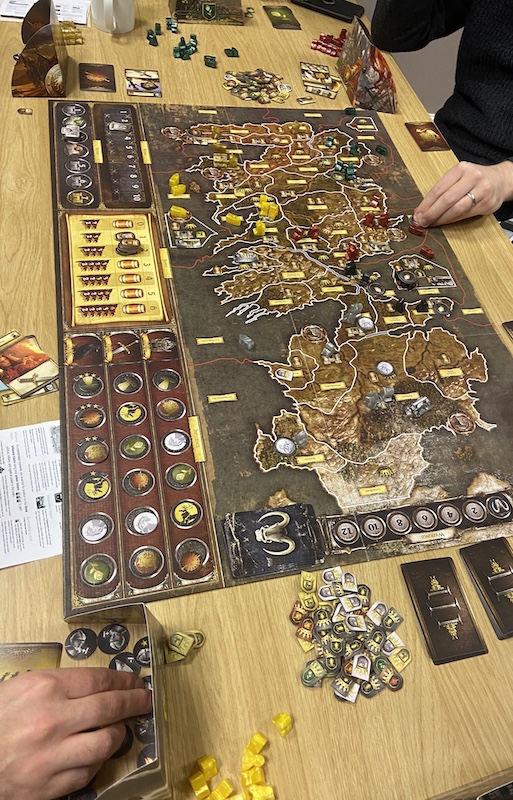 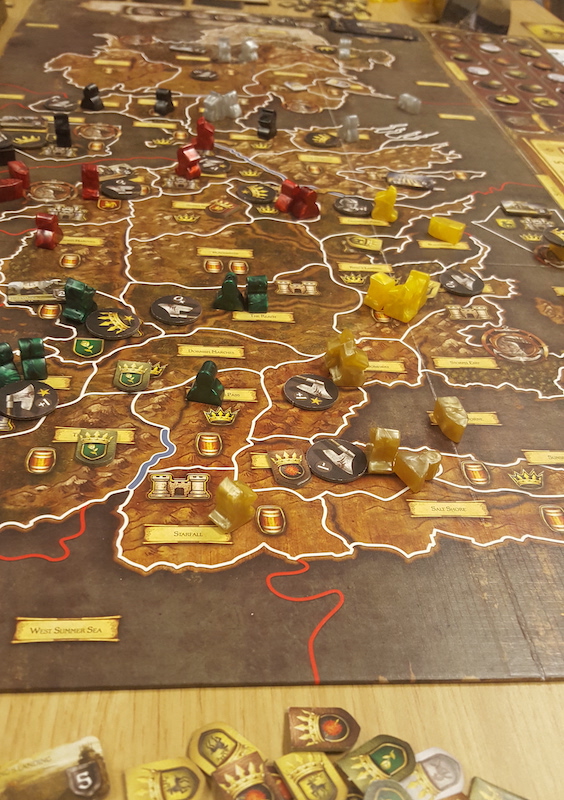 A Game of Thrones - The Board Game 2nd Edition with a full 6 players was the other pre-booked game. This is a classic Fantasy Flight game, linked to a well known IP (at the time, in 2012, it was only the books - there’s an expansion that covers later books, still not the TV show). At it’s core, there is a strong Diplomacy vibe; you can attack directly or support, but you can lend your support to any adjacent player (insert much negotiation). The full game is 10 rounds or an instant win condition, but everyone agreed to stop after 7 rounds so we had a satisfying conclusion (the full game is long, especially once the table talk and informal alliances develop). It is a game of diplomacy or warfare to spread your influence over Westeros. The Stark faction won (like in the TV show - spoilers; doubt we’ll ever know who “wins” in the books) but a lot of the anticipated back stabbing and treachery ensued. 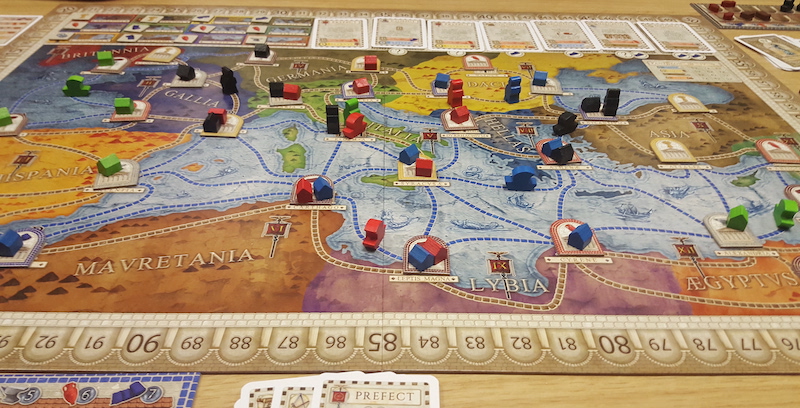 Concordia was chosen for its fourth play at club, it was first played in the first session back after lockdown session 13. It is a card driven civilisation game based around trade and collected goals, so it wasn’t until the last of the scoring categories was counted that the gamers could tell how successful they had been and it turned out it was quite a close game. 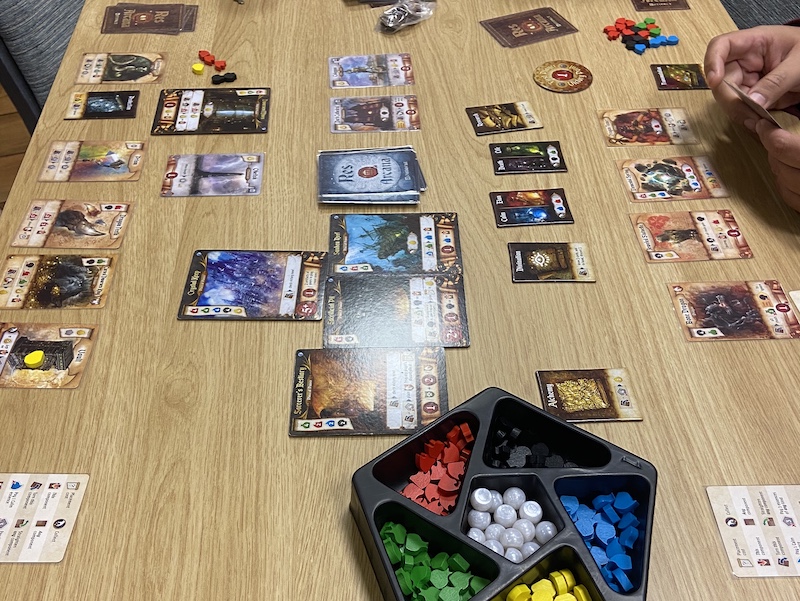 The final table chose the card based engine building magic themed Res Arcana. This one has also been out before but not since sessions 17 and 18, which have a longer review of the game mechanics. This game was quite close with players all getting a mana generating engine established with their played artefacts, but in the end it was the wizard with the bone dragon that emerged victorious.

A couple of quick games of Big Dig finished the night while 2 people waited for the remaining long games to finish.

The next session is on Wednesday 2nd November. If there are any games you want to play then do let us know on Discord or Facebook and we will try and bring them along and matchmake some fellow gamers. Otherwise, committee and regular gamers bring plenty of games to choose from every session - we have tried 142 so far!

On Wednesday 30th November we will be hosting another charity session! There will a bake sale (please bring a few cakes to raise money) and a raffle to win a board game from a choice of 3. At the next session everyone can have a say on the choice charity to support. There will be no entrance fee for the charity session, but you may donate to the charity instead if you wish.