All of the long games played by the 16 participants (including 2 new joiners) had a nature theme this session; from growing plants, creating food webs and dioramas, or building a zoo, to a battle of forest denizens.

There was only 1 short warm up game this time because other tables had pre-booked a couple of very long games. It was a new game to the club The Mind, a cooperative game of laying cards in numerical order. Sounds simple? Of course there is a catch… players can’t communicate about their cards. You simply stare into one another’s eyes, and when you feel the time is right, you play your lowest card. If no one holds a card lower than what you played, great, the game continues! For a game with no communication it certainly generated a lot of noise in the form of celebration when a round had been completed successfully or groans when the sequence had failed. 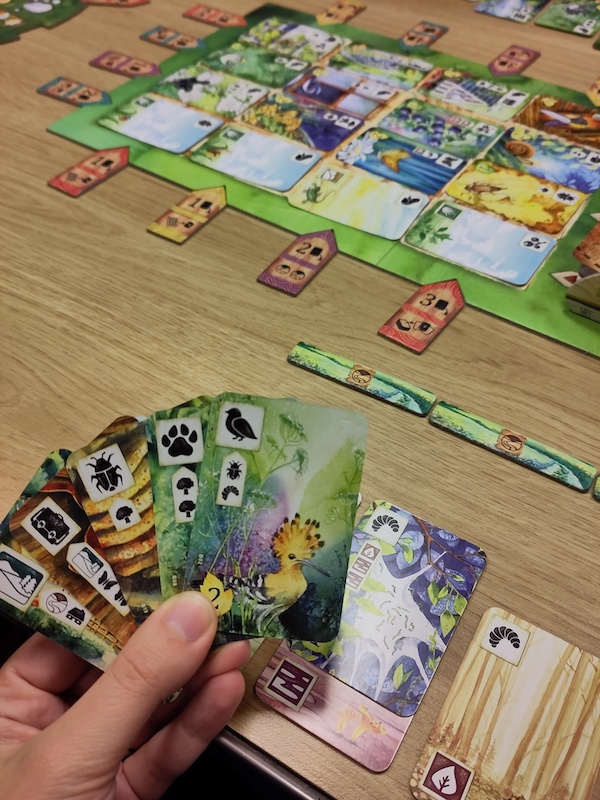 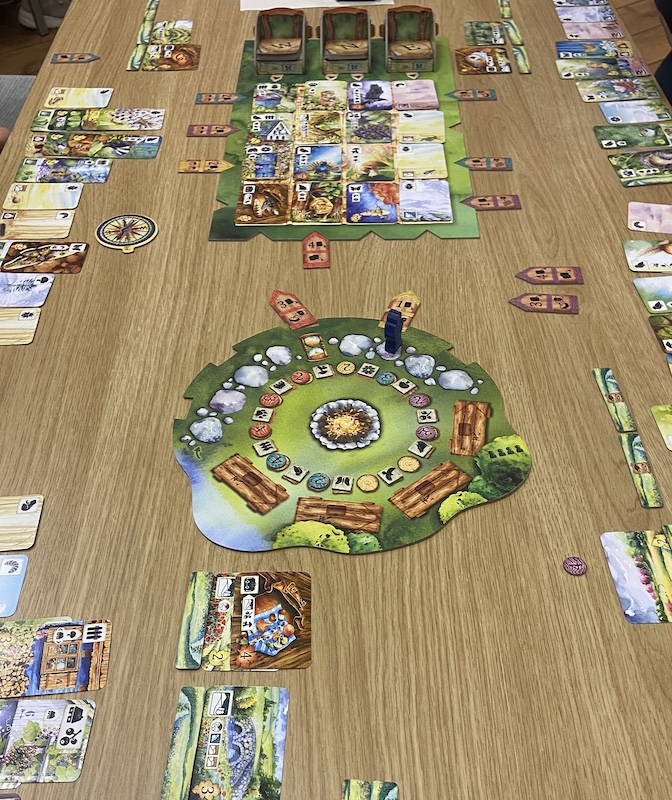 This table then moved on to play Meadow last played back in session 33, a pretty game building up food webs by careful card selection and worker placement to build victory points through attracting more and bigger creatures into your meadow, generating a diorama, or achieving objective bonuses from around the campfire. 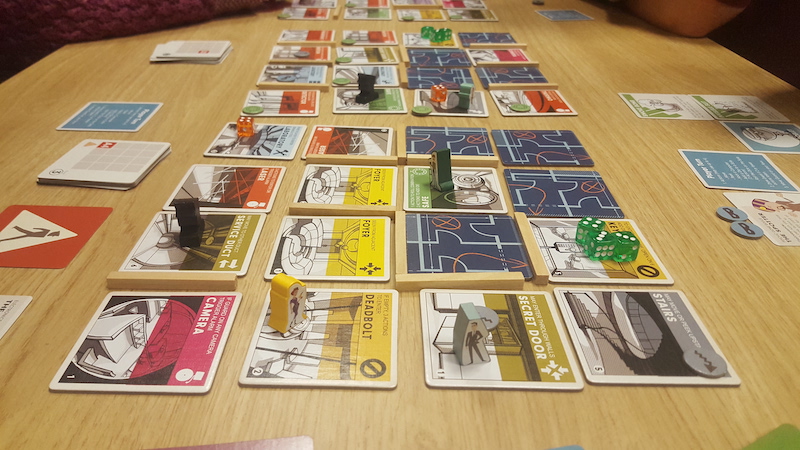 To round off the evening this table then tried a game of Burgle Bros, third time out at the club (see sessions 6 and thirty seven), but sadly it was an unsuccessful heist this time. 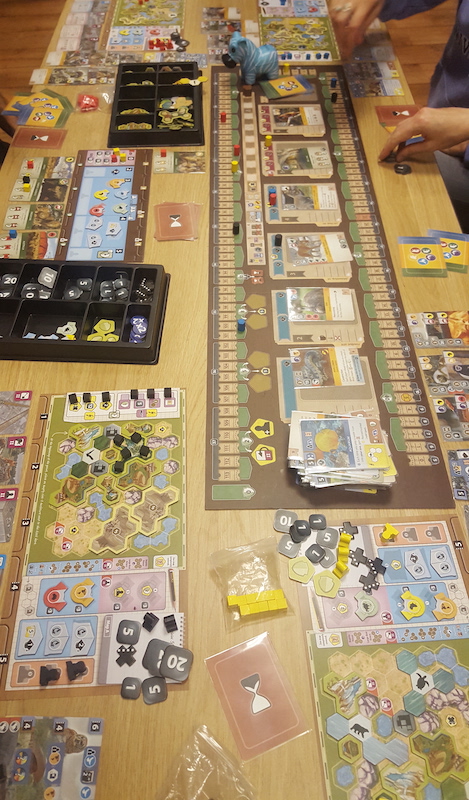 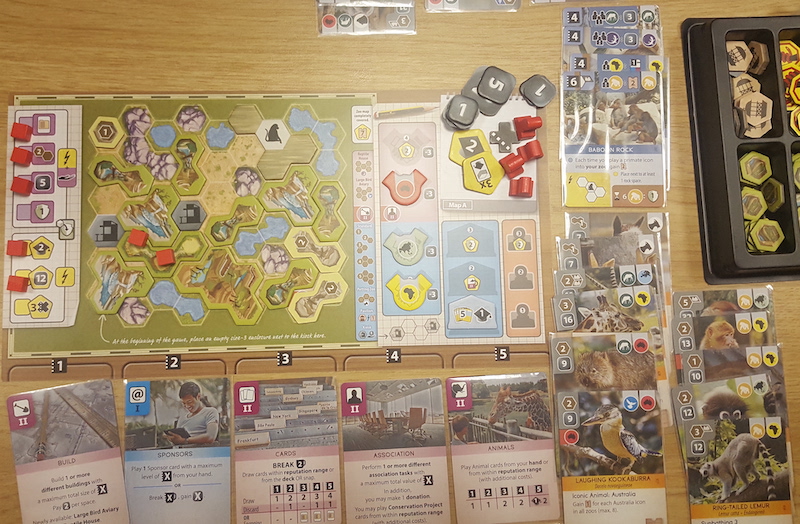 Ark Nova had been requested in advance, which was important as this is a long game with 4 players. It had previously been attempted back in the spring in session 28 but it hadn’t been possible to finish the game properly before the end of the night. This time everyone was prepared, the board was setup ready, and instructional gameplay videos had been viewed, so the 4 players were set to start from 7.30.

The aim of the game is to build the best zoo, which is decided by a combination of its appeal (or nicest animals included) and conservation scores. End game is triggered when the markers for those 2 scores crossover, leaving at least 1 player with a positive score and possibly catching others with negative scores unless their end of game bonus objective and any final score tableau cards push their markers past each other. In the end the game finished when Kathy J. triggered the final round by completing a high scoring African conservation project. Her zoo had focused on reptiles and conservation, but in the end in was Neil O.’s primate and Africa focused zoo that also achieved crossover and scored slightly higher. Tom M. had specialised in birds and large animals while Natasha M. in Australasian animals and predators, but both hadn’t quite filled enough enclosures to get a positive score.

After a couple of rounds the mechanics are simple to learn but with hundreds of cards and options each turn there are many decisions to make. The length of the game is due to the large number of turns to required to build enclosures, raise enough money, buy animals, use sponsors, or run conservation projects to get both markers high enough to cross. However, the evening seemed to fly by and everyone was very happy with their final zoos. With similar forward planning this game is likely to be back on the tables again. 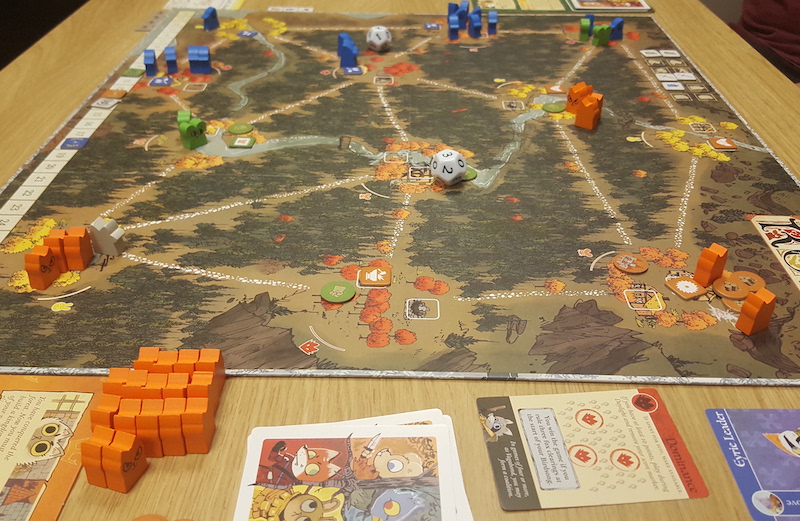 The other pre-planned table had chosen very popular Root, back for a fifth game at the club of forest adventure and warfare. The vagabond faction again emerged victorious in this asymmetric game where each player has a different set of victory conditions. 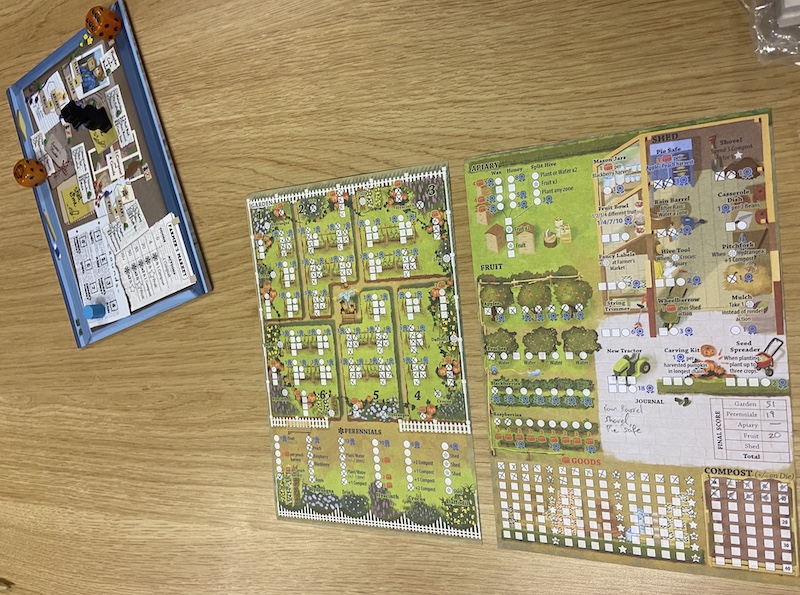 The final table chose to play 2 games of Three Sisters then 2 games of Tomb Trader. The first is a roll and write game about growing crops. This game was back from the previous session with some new players trying out different strategies to determine the most successful gardener. Tomb Trader (now out for a fourth time) is a very different play style, push your luck and bluffing to obtain the most treasure from a series of 7 tombs, a silly but fun game to finish the night with.

The next session is Wednesday 19th October. Do let us know on Discord or Facebook if you want to try any games and we will try and bring them along and matchmake some fellow gamers. Or just turn up and see what is on offer, there should be a game to suit everyone available.