We had lots of new games out this session - 3 new quick options for the start or end of the night, and 2 new long games with a development theme. This week we had 13 returning gamers playing 7 games over 3 tables. 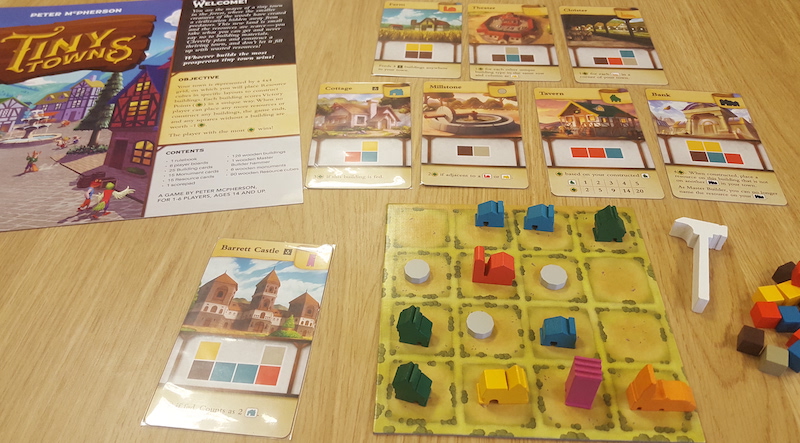 Early joiners got started with a 6-player game of Tiny Towns. Everyone starts with a 4x4 grid and a communal set of 7 building card types that require the positioning of certain combinations of coloured blocks (5 colours) in the grid. Once you satisfy the layout you can remove all the blocks and put the corresponding building in 1 of the previously used squares. Different buildings have different scoring rules or requirements based on the other buildings in the town. Each player also has 1 secret tower card with a unique building block combination and victory condition to add to their town. Play progresses with each player calling out a resource type and all players must take a cube of that colour and add it to their town. Buildings can be converted once the combination requirement has been matched. The challenge is to keep finishing buildings and in strategic places so you can remove the blocks and start new buildings. You are out when your grid is full and blocks are worth minus 1 point at game end. This is a fairly simple concept to explain but it is quite fiendish to actually use the space most effectively and not get caught out by block colours selected by other players. 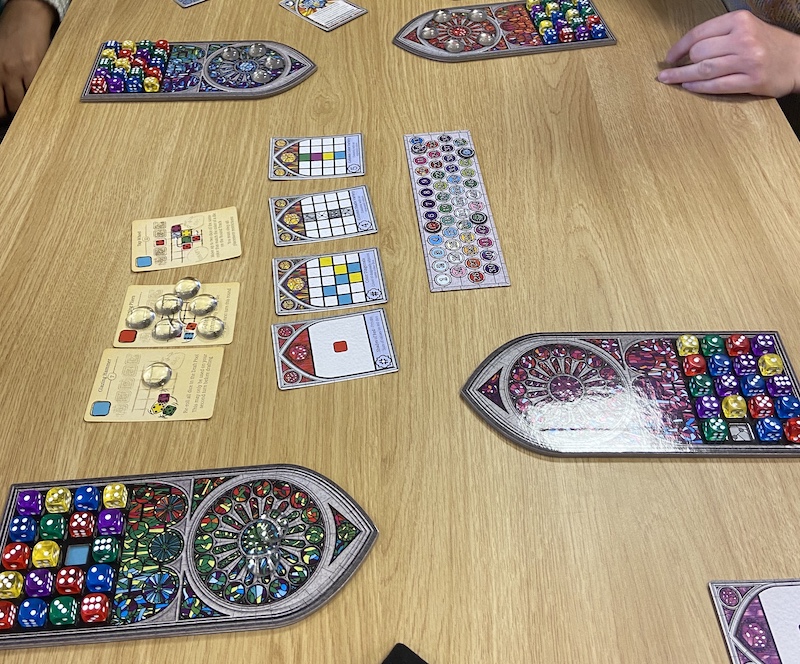 Soon after there were enough attendees to start a 4-player game of Sagrada back from session 28 and the stained glass window themed dice placement commenced. 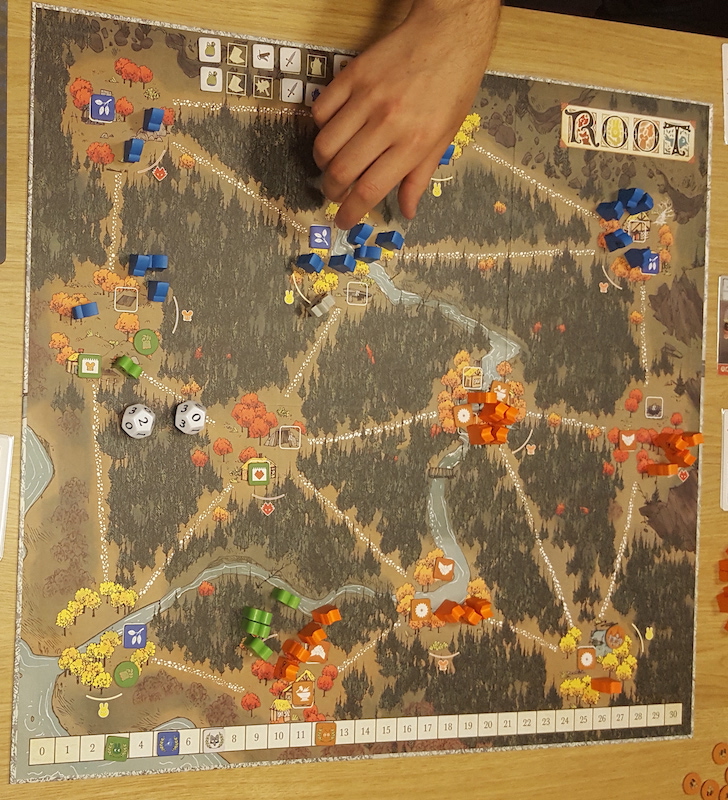 Sophie F.W. had missed out on Root at the previous session and was keen to play, which suited 3 of the players from that last game. Some of those who had played before switched to try new factions, while some tried to master the faction they had played before in this asymmetric forest conquering game. It was noticeable that the players got the hang of the game from the previous occasion, and there was a lot of strategising and negotiation at play. This time, we saw the Eyrie dynasty play a dominance card early in the game, and thus change its victory condition to an area control target that the player was well positioned for. This move forced both Cats and Alliance players to switch into a defensive play-style in order to secure the map corners sought after by the dynasty. This was of benefit to the Vagabond, who carried out a few targeted attacks to weaken the other player’s positions and once again could hit the 30 victory point mark by completing quests. It was a very tight win however!

Meanwhile, other players had been eyeing up Terra Mystica from the selection on offer and so Simon W. taught this complex terraforming and strategy game. Many of the games mechanics have been reimplemented in Gaia Project, which has been played in session 25. With 4 beginners it took a while to explain all the rules and get going making this the latest running game of the night. It’s a delicate balance of making points during the 6 rounds, setting up your economy to generate workers and coins in order to buy/expand/upgrade, and keeping an eye on end of game scoring. Despite a slow start (with the necessary teaching), the rounds became faster as people got a handle on how to play. How each faction interacts, how the make points, and how the map develops with 5 players is part of the fun. Simon W. was a bad teacher and took the win, but everyone had good scores and explored the game. Is Gaia Project better than Terra Mystica? The teacher says no… but that’s a matter of opinion. 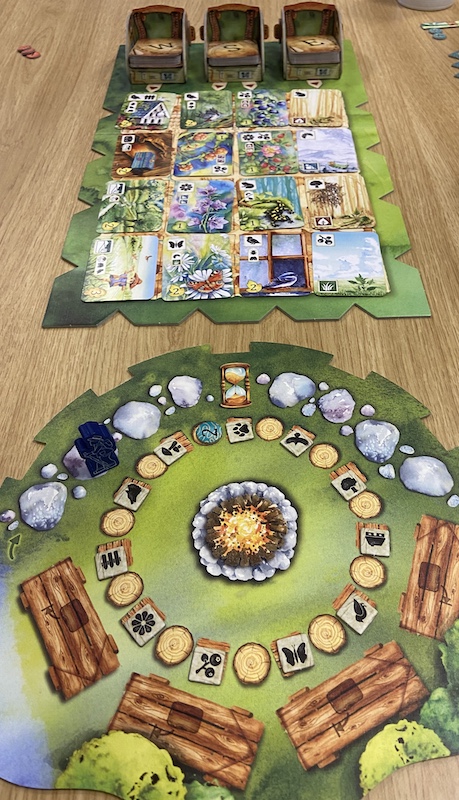 This left the last table of 4 trying one of Rich W.’s games Meadow, a very pretty worker placement and tableau building game. It is a much simpler game to explain and so it wasn’t long before the players were working through the 8 rounds picking up terrain or animal cards and placing them in the tableau. Cards are selected from a 4x4 grid with certain columns biased by being filled from certain decks to focus on either terrain, animal, or special cards. Your 4 “workers” have values 1-4 and are placed in notches around the grid where value 1 picks up the card 1 away from the marker etc., so at the start of the round there are 3 ways to pick up each card within the grid but choices become more restricted as the notches fill up. There is also a campfire board - sending workers here allows a change to the standard single pick and place action to gain more cards or more placements. The stone ring also has randomly placed icons each game - if you send a worker to the campfire and have the 2 adjacent icons to an empty stone both showing in your tableau you can claim the stone with your 2 then 3 then 4 victory point marker. In a 4-player game there are only 11 stones, so at least 1 player will miss out on placing all their markers. 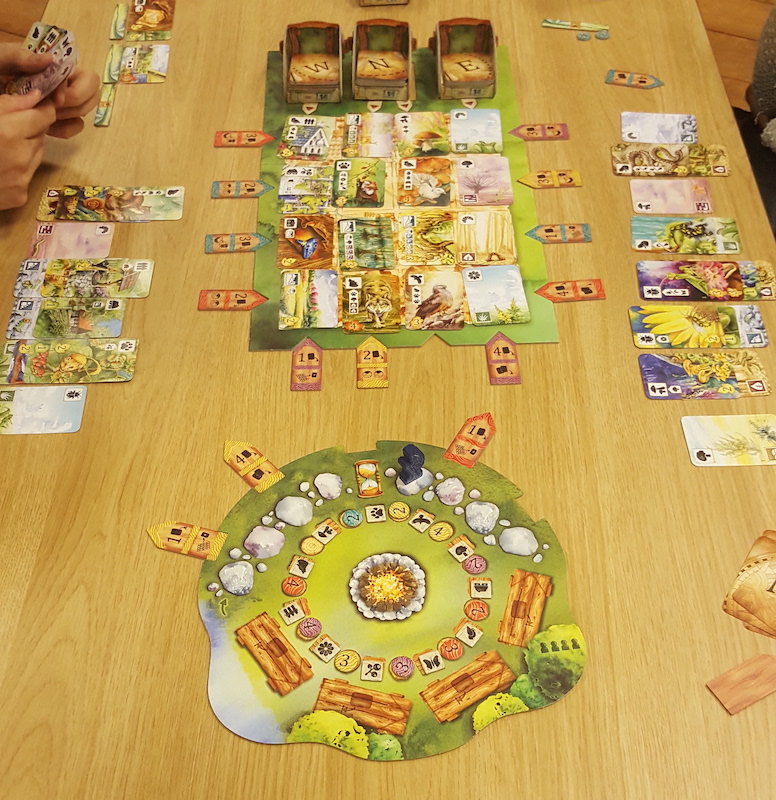 Finally tableau placement, cards provide icons and victory points but have requirements, so you essentially build a food web. If you have all the icons on show you can place the new card, but by covering up 1 of the requirement icons on a previously played card. For example, to place a frog might require a bug and a certain terrain icon. Terrain cards often come with a bug or worm icon, so 1 pre-placed card might meet this requirement, but then placing the frog will cover the bug. Then a bird might require a frog and a worm icon, requiring another terrain card with a worm to be placed first and then a decision to cover the frog or the worm to place the bird, which will depend on what your next plans are. So although these are quite simple mechanisms there are key decisions to be made on which cards to pick up, what order to place your workers each turn, and when to visit the campfire. It was quite a close game with 63 points winning, but 62, 61 and 56 points following up, with the loser being the player that had missed out on their final campfire bonus, with all the tableau scores being very similar.

Once the Meadow scores were all counted up, the table switched to a couple of games of light-weight Tomb Trader to finish the night. This is a push your luck and negotiation game played over 7 rounds. Each player starts with a secret character card, such as the collector or gambler, and these roles get additional victory points for certain types of treasure. Then treasures are revealed in the inner and outer tomb with more treasures appearing per tomb as the game progresses. Players secretly choose which tomb they will visit and then if multiple select the same tomb they have 1 minute to negotiate who gets what treasure - fail to agree and everyone leaves empty handed. Everyone has 3 coins at game start to use to sweeten the deals, with coins worth 1 point each too. Treasure cards give a clue as to which are more desirable to certain characters, so over the 7 rounds you can try and work out what people are collecting and factor that into the negotiations. If you get lucky and are the only person to visit 1 tomb you get half the treasure there rounded down. This was a fast-paced silly but fun game to end the night on. 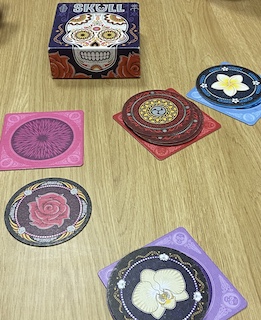 The Rooters had time for a game of Skull before they wrapped up. This is a bluffing party game with Mexican Day of the Dead art themed cards. Cards feature skulls and roses. Each player plays 1 card face down in turn until 1 player states they can turn a certain number of cards face up and only show roses. Then an up bidding phase commences and the winner must reveal the cards. Show a skull and lose 1 of your cards, but the first player to succeed in only revealing roses twice wins.

The next session is on Wednesday 13th July with 1 game already booked up on Discord, so we are looking forward to some Viking related action.