It was another warm summer day when we were grateful for a little air conditioning at the Corn Exchange, with 4 tables on the go serving 18 gamers (4 new) and 10 different games.

There was just 1 short starter game this session, Tomb Trader, back for a third session of archaeological negotiations and cut throat treasure pilfering. See session 33 for a description of game play.

The other tables got straight into some longer games. 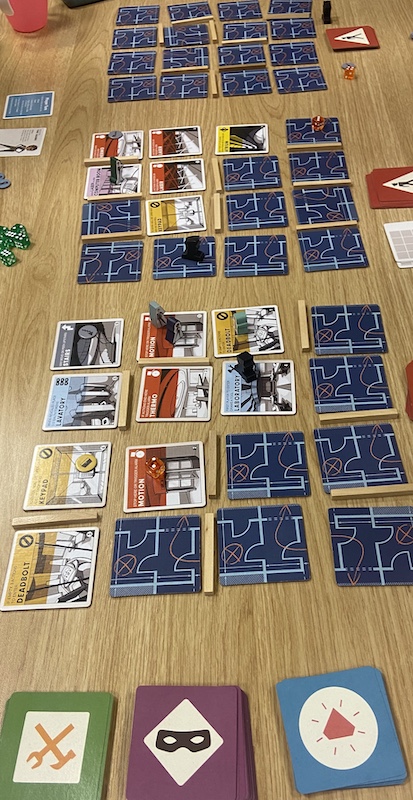 Catherine D. set up Burgle Bros for some cooperative criminal activity. It was a second time out for this game, back from session 6. Players work through 3 floors in a very secure building, trying to crack a safe on each floor, and then escape with the loot to the helicopter on the roof to win. 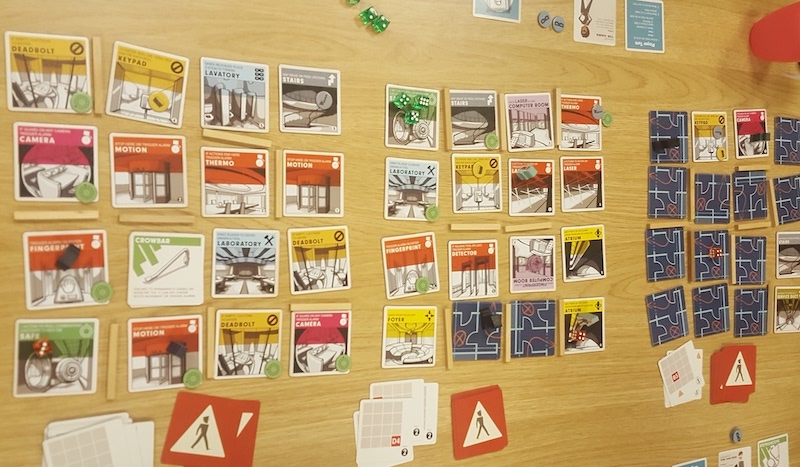 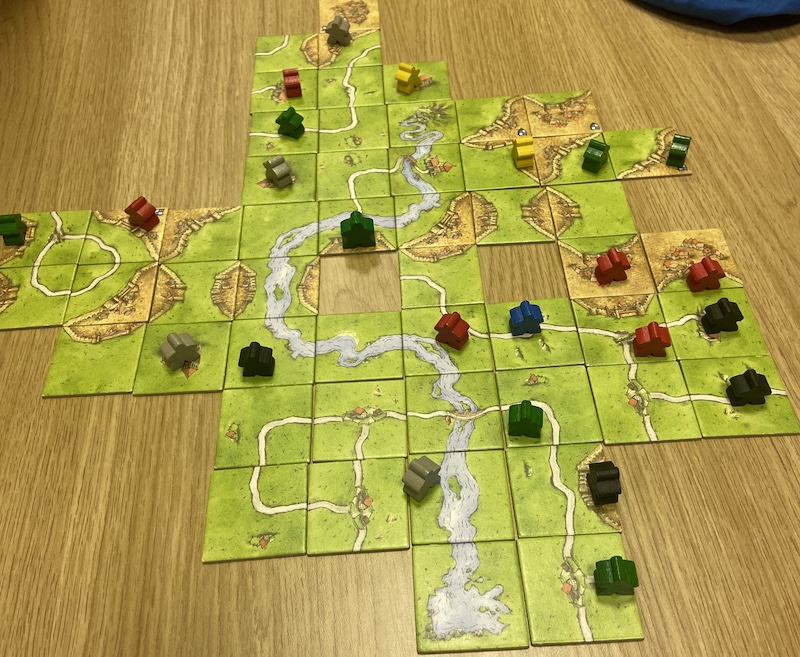 Kathy J. hosted a 6-player game of Carcassonne, a classic game not actually out on the tables since session 1! This game has a very simple mechanic: pick a tile, place a tile, and start building a map of medieval French walled towns. The strategy comes in how to place your limited supply of meeples to score points. As we had quite a few learners, we stuck to the basic game with just towns, roads, monasteries, and farmers. In the end, the scores where quite close with 3 players managing a whole lap of the score board and getting more than 50 points. 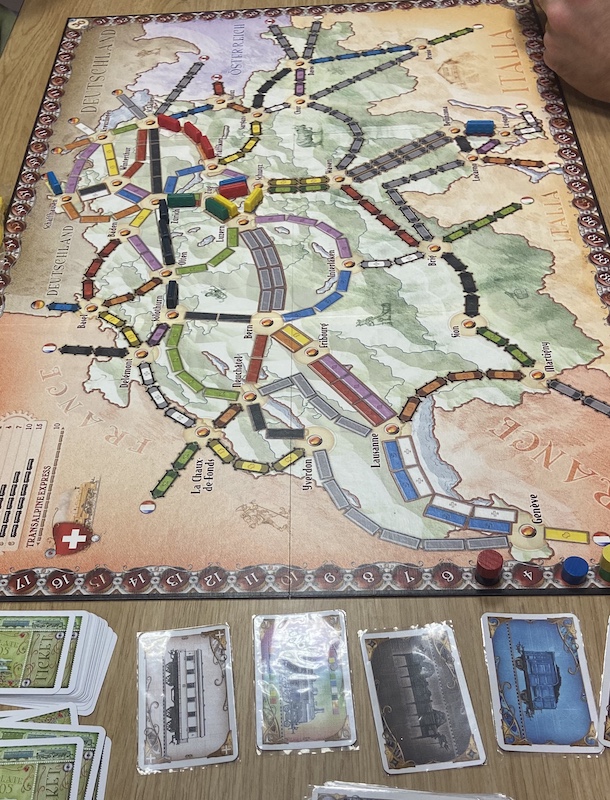 Jeremy J. supervised a game of Ticket to Ride: Switzerland, mostly because Simon W. had insisted there should be a train game even if he was unable to attend and host one himself, the more back-stabbing and cut-throat the better. So another classic game, Ticket to Ride, was chosen but trying the expansion pack Switzerland map. What the 5 players involved failed to check was the map specific rules, particularly the advised player count for this small map in a very mountainous country, which was 3. However, it did create exactly the conditions Simon would have wanted: competition constructing the available tracks, the destination tickets ran out, and many negative scores were generated as routes could not be completed in time. Despite these challenges it was a deemed a fun game by all. 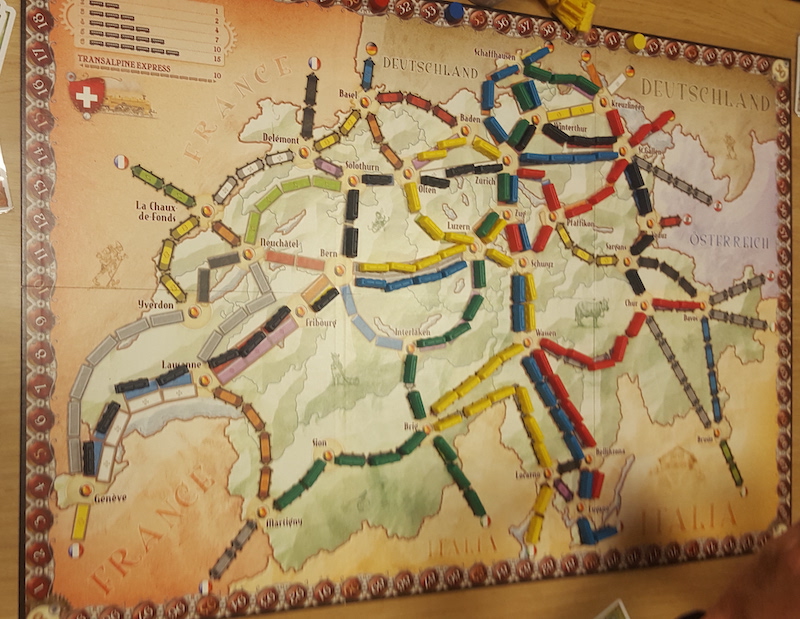 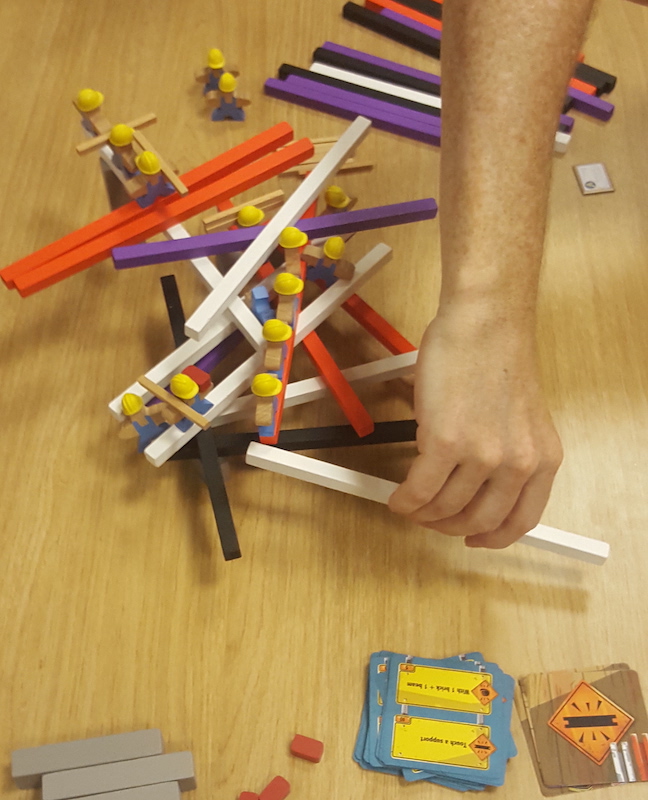 Nathan B. brought Men at Work. New to the club, this is a stacking and balancing game with a construction theme. Players aim to construct a tower and avoid accidents to earn Employee of the Month. A very nice looking game with lots of interesting wooden components to stack, balance or collapse. 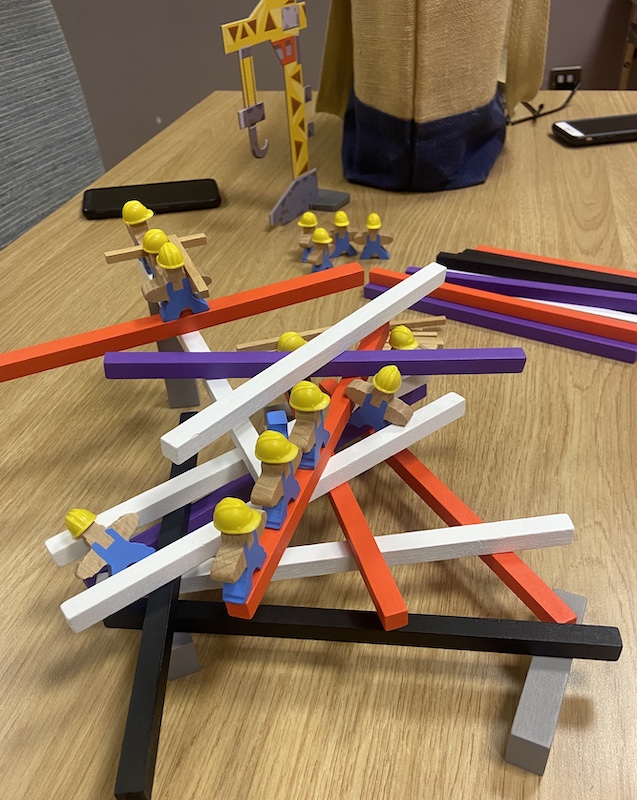 Then the 6-player table got stuck into two rounds of Codenames, a popular party game that is best played with 6 or more players split into two teams, last seen as a warm up game in session 35. 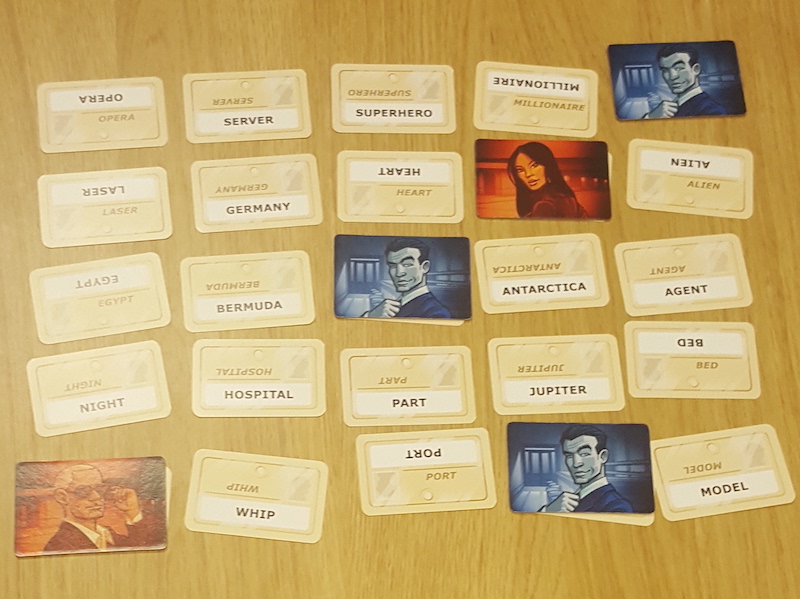 After that there was a little table/player reshuffle and a 6-player game of Ecosystem got going. Ecosystem has now beaten 7 Wonders and The City as most popular club game with 10 sessions played! It really is simple to teach and scales well to accommodate lots of players. It has become a popular end of session game for those wanting a last game before having to go home. 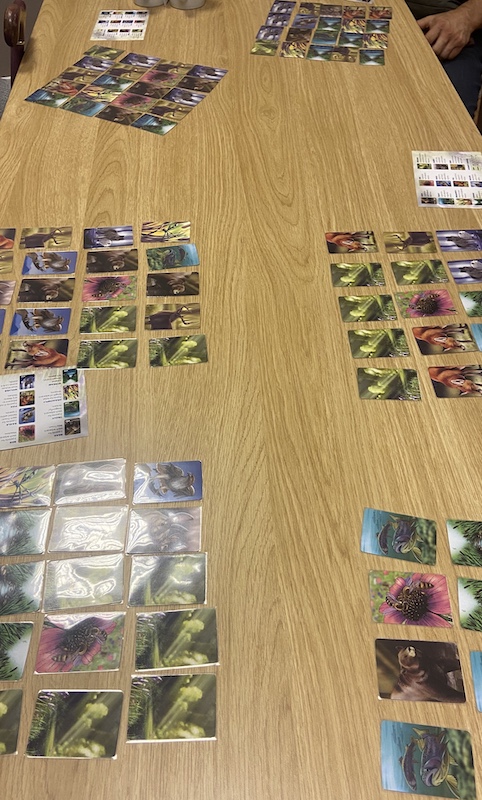 Rich W. got a 5-player game of The Crew going and they got through 8 missions before calling an end to this cooperative whist based space exploration themed game.

Neil O. organised a 3-player game of Legendary Encounters: An Alien Deck Building Game. This game is based on the Aliens movie franchise and the players picked Aliens (argued that night as the best film in the series) as the theme for the card sets included. This is a cooperative game trying to survive the hordes of attacking aliens, and meet certain objectives. The team had one chest-bursting fatality, but the remaining 2 were able to help Ripley and defeat the Alien queen. 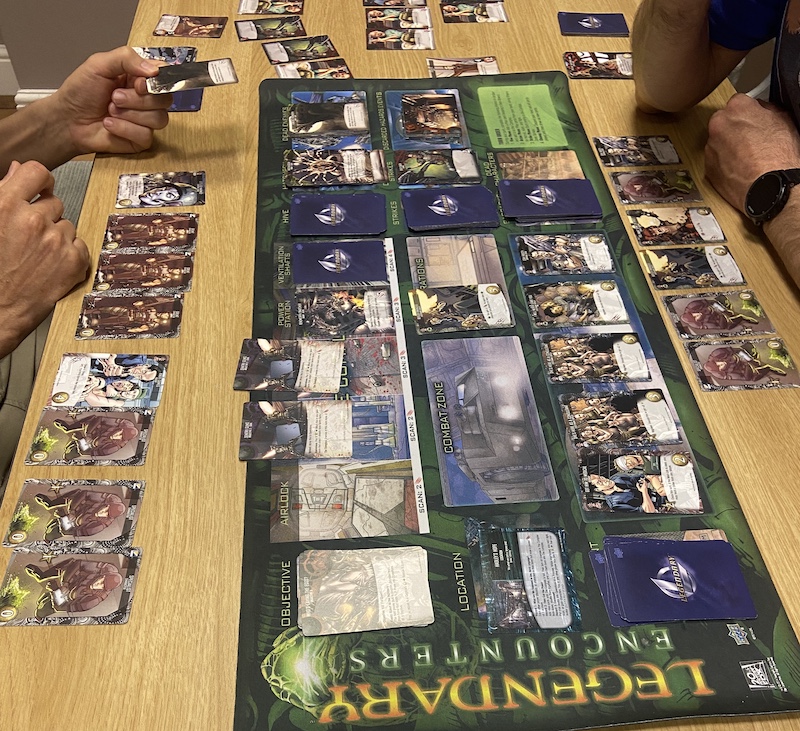 Finally, 1 table joined up for a 3-player cooperative island heist on the Forbidden Island, another game back from Session One! This game is based on stripped down Pandemic style mechanics, with a few actions for the players, then bad stuff happens, in this case the island starts sinking. Players need to locate enough cards to acquire all 4 treasures, whilst sandbagging enough key parts of the island to maintain routes to the treasure locations and the helicopter landing pad, so they can all escape the island with the loot.

The next session is on Wednesday 7th September. Please join us, bring games, try new games, and ask if there are games you have always wanted to try! It is likely a club member may have it already. As always you can post on the Discord thread with questions or for some pre-session matchmaking.