This was our most popular session since our debut back after lockdown session 13 with 20 gamers attending, including 2 new faces. We had 9 games out over 5 tables, 3 of which were new to the club.

There was just one starter game this session for the early joiners, Codenames. This is a party game that scales well for lots of players. You split into 2 teams, and in this session we had 3 per team. There is a 5 x 5 grid of words on the table. Teams nominate a spymaster or clue giver, who can see a map of the grid indicating which words they need their teams to guess, and also where the assassin card is located - guess the assassin and it is automatic game over. Then the spymaster needs to provide a clue that can indicate as many of their teams words as possible, and ideally none of the oppositions! The first team to find all of their words (or have them found by the opposition) and importantly not find the assassin wins. This game, teams were obviously not quite on the same wavelength as their respective spymasters for some of the clues, but the blue team prevailed in a nice gentle warm up for the evening. 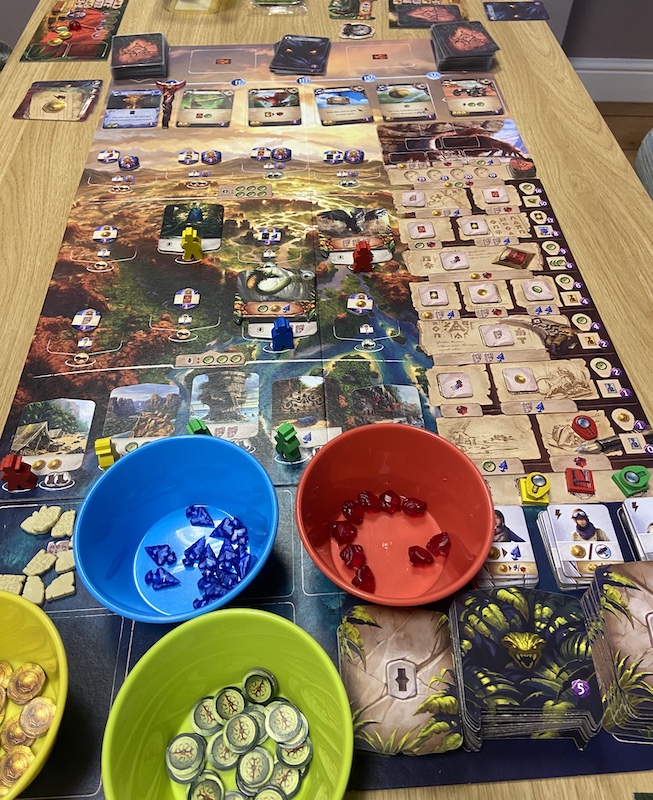 Will B. had been prepared with another pre-session Discord game request and it was easy to fill the remaining seats for a 4-player game of Lost Ruins of Arnak. This was its fourth time out and players selected a variety of strategies to bring in the victory points with Kathy J. and Iain D. focusing more on exploring and taming the guardians, Jyo K. on research reaching the very top tier of the lost temple, and Will B. on tool and artefact acquisition. He certainly built up a big deck and had many additional turns through chaining cards and their actions together. The result was a win for Jyo K. with Iain D. close behind. 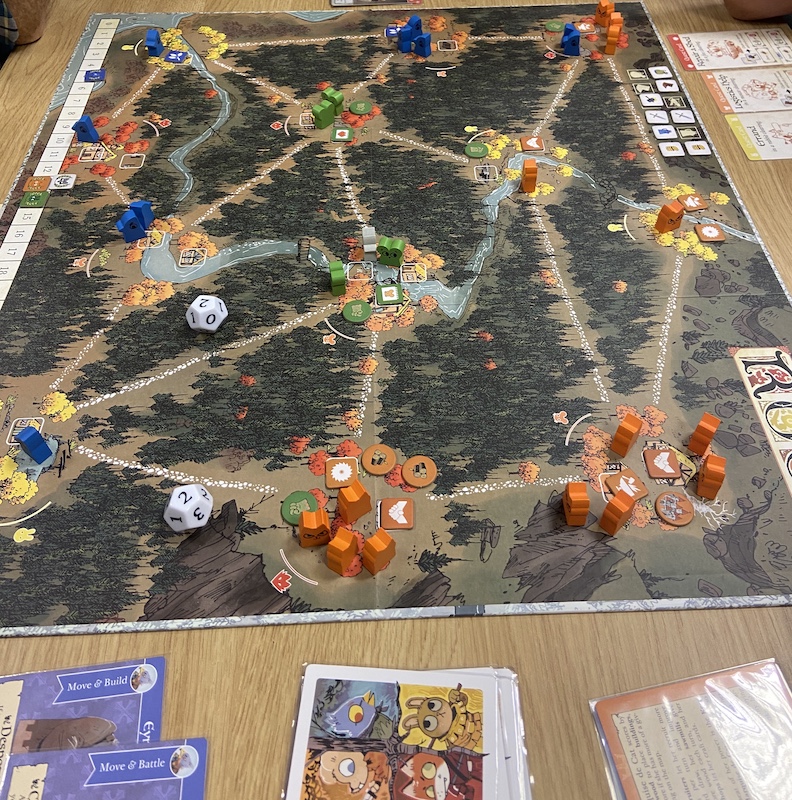 Sophie F.W. proposed a game of Root, which has been popular in recent weeks, back for a third play and again no trouble filling seats in this asymmetric conquest game. We had another tight game that saw the Alliance establish control over the centre of the board, and the Eyrie dynasty conquer the southern clearings. The Vagabond repeatedly engaged in trade with the Alliance, reaching ally status, and drawing its armies into fight against the Marquese’s units. Despite everyone’s best efforts, the Vagabond won again. 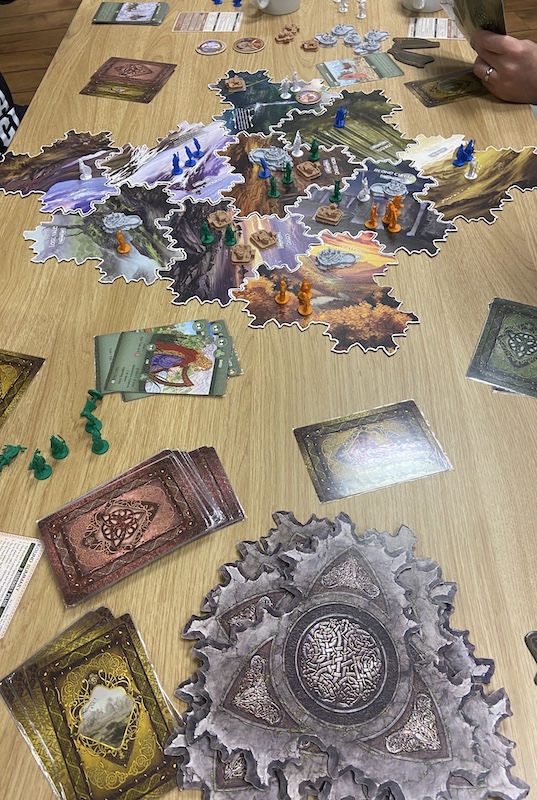 Diarmuid K. had brought along Inis and set up a 4-player game. This was so popular it was left out the table for a second play. This is a game of Celtic history with players vying to become King of the island of Inis. There are 3 victory conditions; leadership, land or religion. It is a card drafting, hand management and bluffing game, with action cards and epic tale cards to inspire your clan. You can battle and eliminate other clans, but balance is required otherwise there will be no clans to lead and achieve the leadership condition. 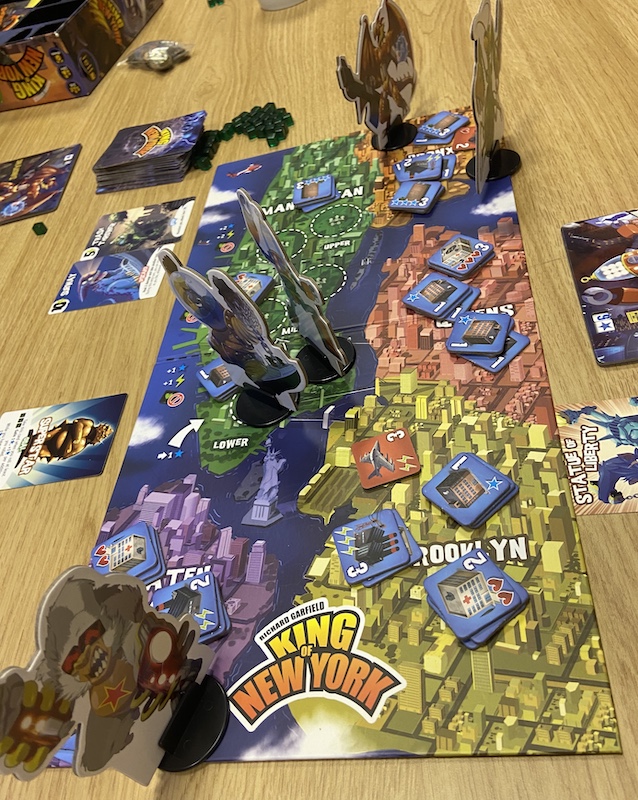 Neil O. organised a 5-player game of King of New York, which is a re-implementation of King of Tokyo with new ways to play. As in the original, your goal is to be either the last monster standing or to collect 20 victory points. It is played with 6 dice that can be re-rolled up to 3 times to determine your actions: claws to damage opponents, hearts to heal yourself, energy to buy power cards. This game introduces smashing, which can destroy buildings but that causes a retaliation by the military. There is also fame - you can try and become a superstar in the city, but beware because fame is fickle and the next monster could become more popular. 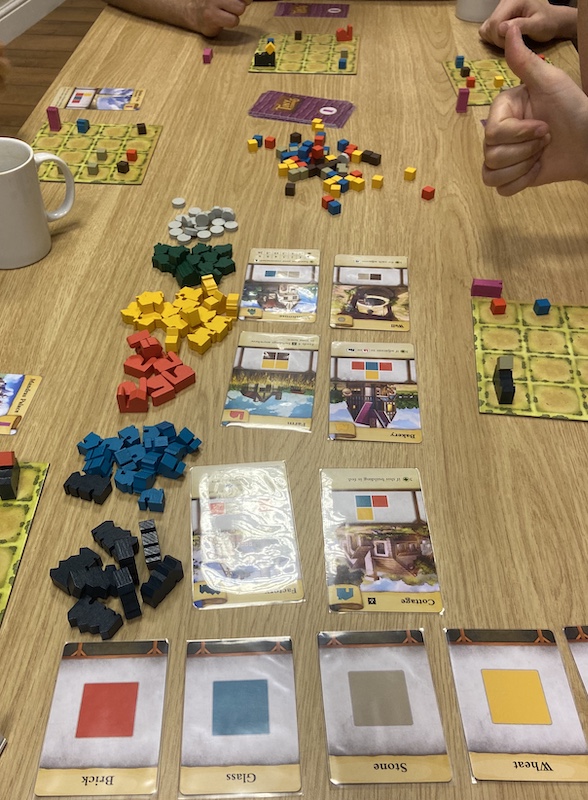 When that monster mayhem and destruction was done the table turned to a more peaceful building theme with 2 games of Tiny Towns, back for its third session in a row. It has a simple gameplay mechanism to teach, but is quite hard to master as if you try and multi-task too many buildings at once you can get caught with lots of unfinished buildings for negative points. 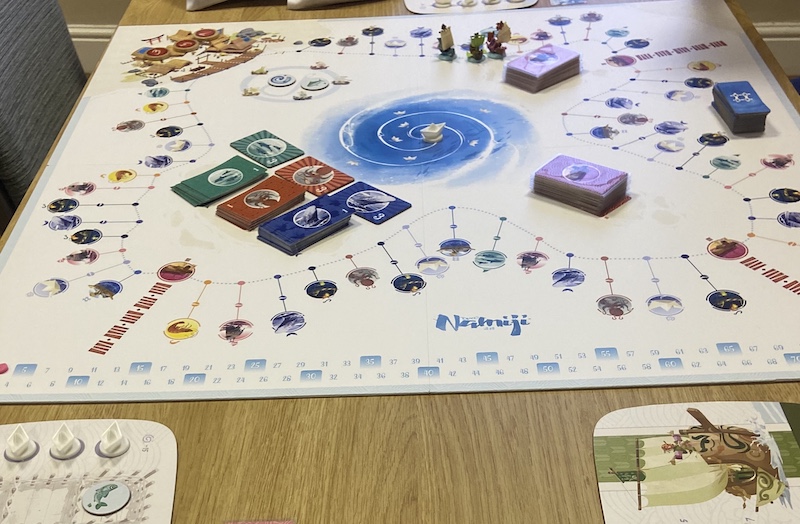 Catherine D. showcased some of her more zen and beautifully illustrated games, first Namiji and then Cottage Garden. Namiji, which is based on fishing off the coast of Japan, was back out for a third time. Cottage Garden is a Tetris-like game of filling flowerbeds with flowers, pots, cloches, and cats in a sort of competitive gardening, not seen since session 4. This is the first in a series of nature themed polyomino tile games from designer Uwe Rosenberg, and the other titles Indian Summer and Spring Meadow are also available to request and try. 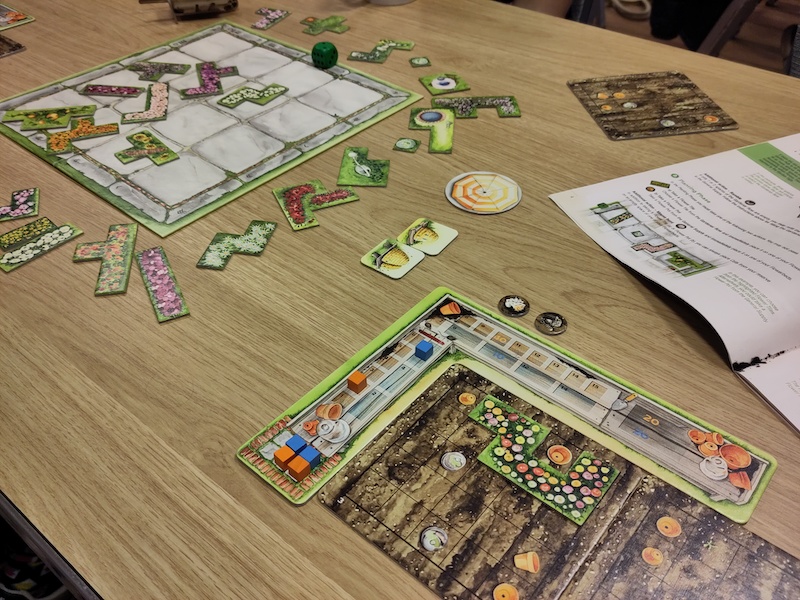 Finally, the remnants of 2 tables joined up for a 6-player game of Ecosystem, back out for a ninth session of a pass and play mechanic placing habitat and animal cards into a tableau. Each card type has different victory conditions based on the number of the type placed, position, or proximity to other card types, with variety of types placed rewarded with a diversity bonus.

The next session is on Wednesday 10th August. Please join us - there is sure to be a wide variety of games on offer! If you want to request a game, drop a post on the Discord thread and we can do some pre-session matchmaking.