We had 13 players this session (11 returners and 2 new joiners) trying 3 new games and 4 repeat performances. 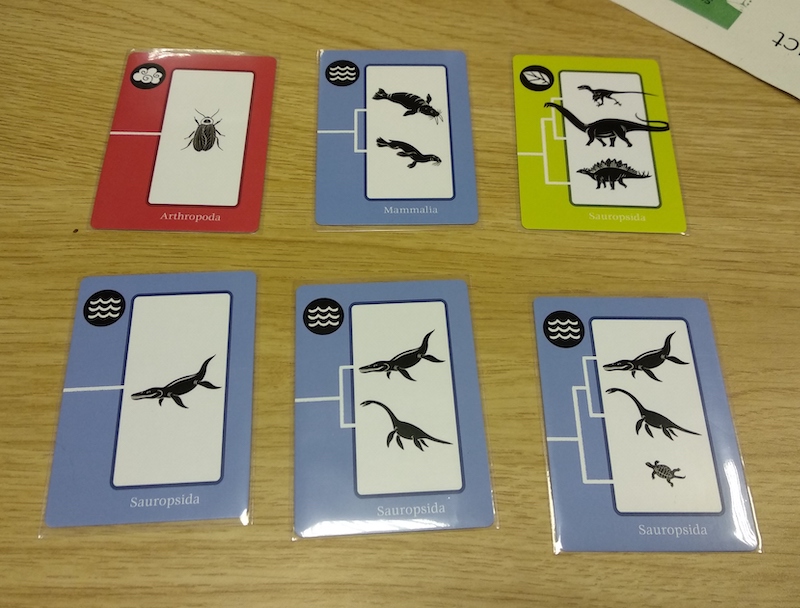 The early starters tried Clades Prehistoric while waiting for the hot water heater to get to temperature. This game is essentially very advanced snap using cards with an evolutionary theme. The aim is to spot sets of 3 cards where at least 1 of the variables is different and all the other variables must all be identical or all be different. The variables are card colour (red, green, blue), number of animals on the card (1, 2, 3), symbol depicting where the animal lives (air, land, water), and type of animal (insect, dinosaur, mammal). Players call out when they see a valid set and claim the cards. It is a very easy game for people arriving to just join in and start spotting sets. 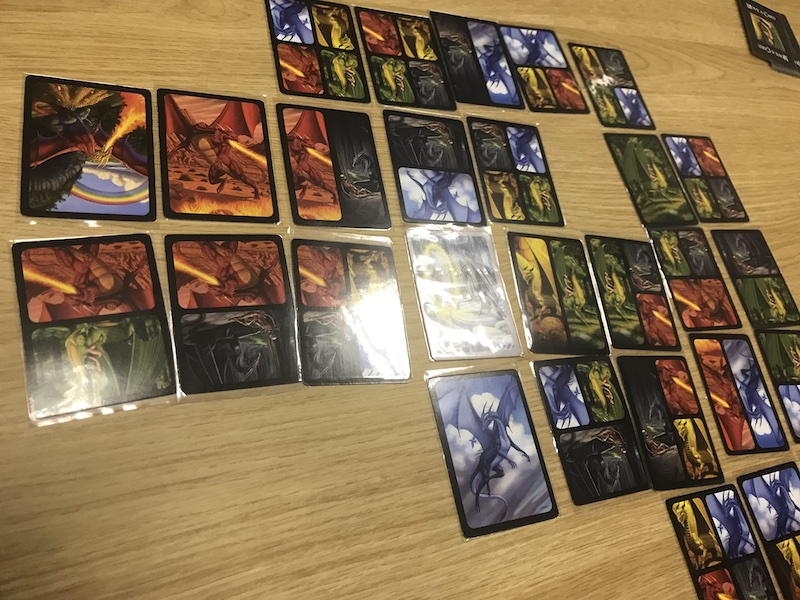 After this the short games selected this session were Seven Dragons (see session 2 and session 7) and new to the club Timeline. In Timeline players take turns placing a historical event card in a row on the table. Then the date of the event is revealed. If the card is in the correct place on the timeline it stays, otherwise it is removed and the player gets another card. The aim is to be first to get rid of all your cards by placing them correctly. It was a nice lightweight general knowledge game to get the session started. 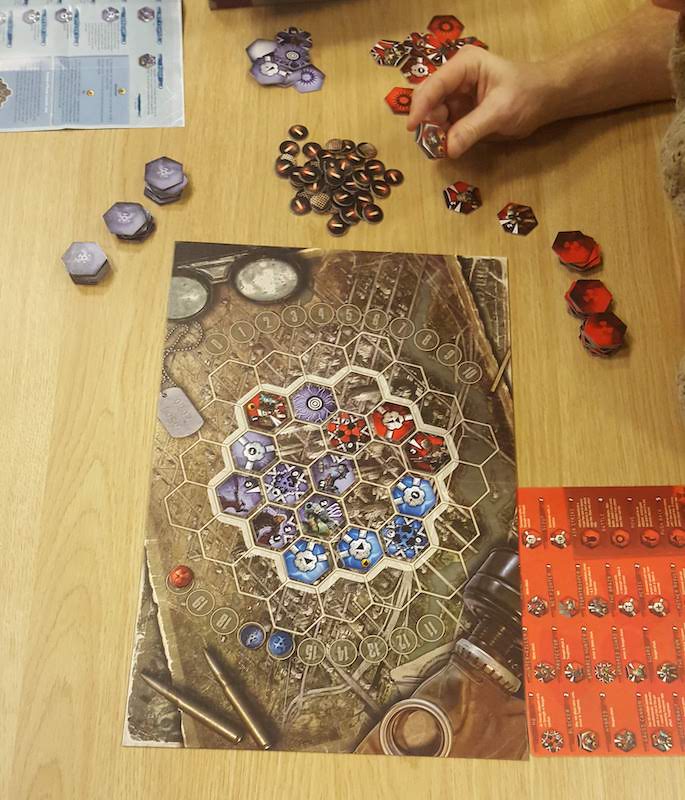 Neuroshima Hex! had been pitched on Discord earlier in the week and a 3-player game got underway. This is a strategy grid based war game where up to 4 players control a post-apocalyptic army trying to destroy all the enemy headquarters. 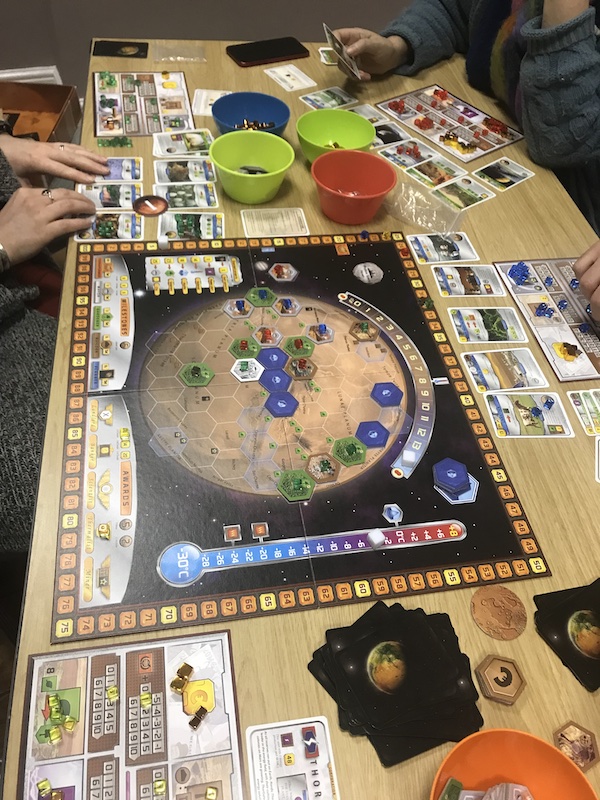 Terraforming Mars was a popular choice and so a 5-player game started on the second table. This is a returning favourite last seen in session 5 and session 10. This proved to be the longest game of the night with the players competing to be the best terraforming corporations trying to raise the temperature, oxygen level, and ocean coverage on Mars. 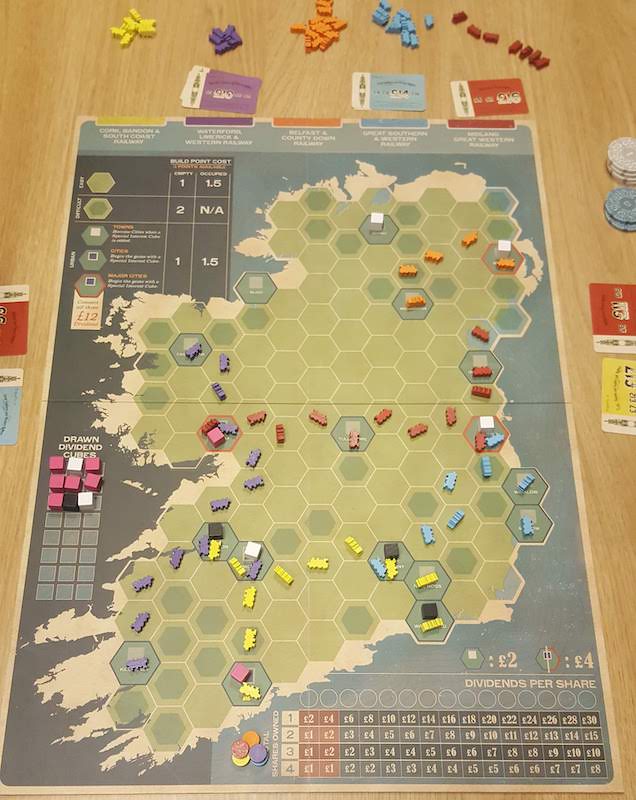 The final 5 players selected Irish Gauge after strong suggestions and box waving by Simon W. pitching for “Choo Choo, Stab Stab” last seen in session 15. After the improbable draw of 3 pink cubes (by Jeremy J.) early in the game certain cities and routes were unlikely to pay many more dividends and fairly undiluted control of the purple company proved the critical factor for victory. Scores were still close 91-71 from top to bottom. 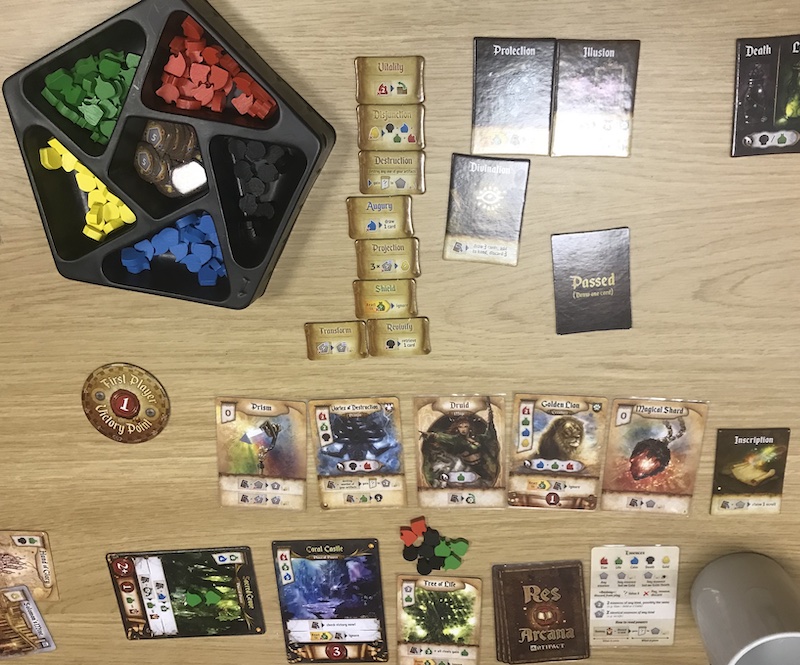 After Irish Gauge, the table then tried 5-player Res Arcana back from the previous week (session 17). This session a blue, black, and gold generation strategy just pipped some strong contenders with a black spawning engine, a red and gold scheme, or an all essence game plan.

This was a fun session with 3 tables active through the night. Do let us know if you have some suggestions of games to play next session on the 17th November.

On the 1st December a charity fundraising night is proposed with all fees on the door and any other money raised in the session going to charity.