We had 18 players this session, 15 returners and 3 new. With some of the committee adhering to the contain the contagion (cold not corona) advice, a few tables were hosted by normal members demonstrating games they had brought, which we encourage all weeks but was particularly helpful this session. Such a variety of themes for games were played this week that I can’t come up with a clever title for the session, if anyone can link wine growing, Machiavellian city building, peaceful Roman economic development, and power supply please post on Discord!

This week early joiners played 2 rounds of club favourites Ecosystem and Kingdomino while Deep Sea Adventure, last seen in session 6, a push your luck exploration game also had an outing. 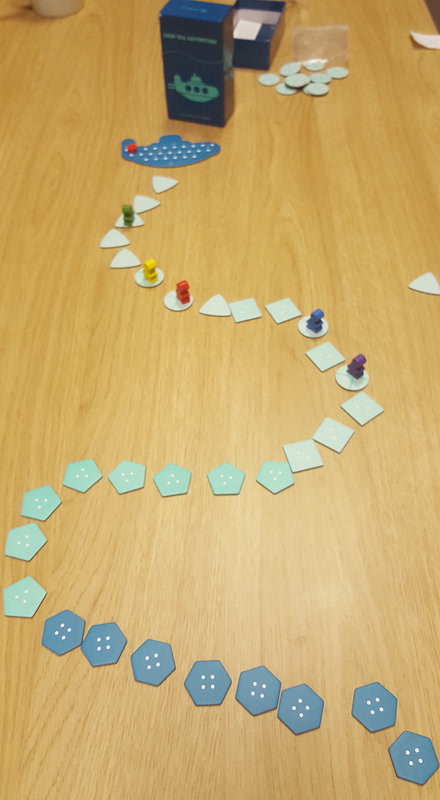 Then the mass pitch and wrangle to determine the long games began. Viticulture had been requested on Discord before the session and Simon W. made a strong case for Concordia, leaving Citadels and Power Grid filling the remaining tables. 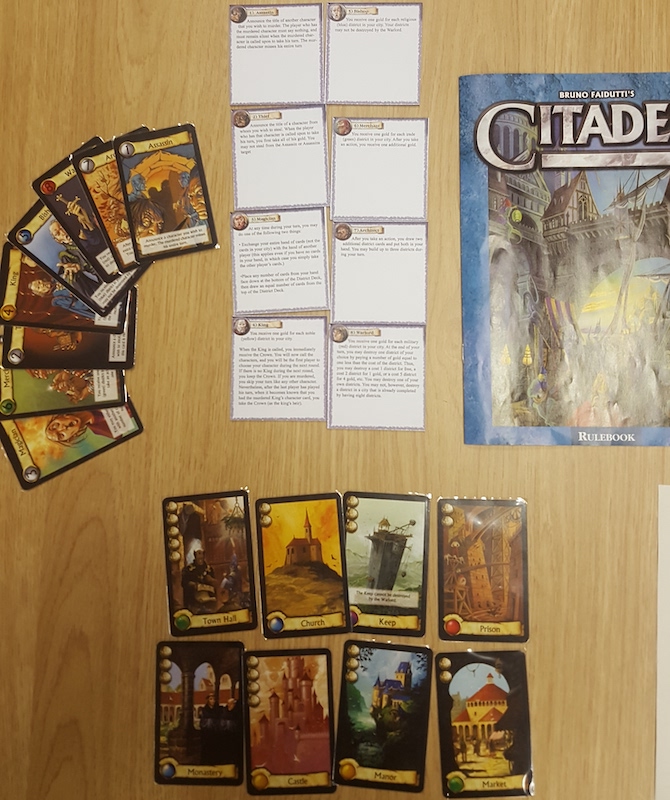 Citadels is an early example of a social deduction game but with an underlying medieval themed city building mechanic. Each round players select a role from 8 and make use of that roles special action to enhance their city building or scupper their opponents. The social deduction element comes from guessing which role each player selected each round so your attempts to assassinate, steal from, or destroy the buildings of the player you expected works out. First city to reach 8 buildings gets a four point bonus and ends the game after that round, with bonus points for anyone else reaching 8 structures, 3 points for a diversity of 5 building types, and the gold value of each building. Its a cut-throat game with 4 roles that can affect opponents and 4 that bring in extra money and actions that allow card swapping or extra building turns. Mechanics are fairly simple, select roles by pick and pass, and depending how many players there are a few roles are randomly and secretly removed each round so you can never be entirely sure which roles the players are selecting before your time to choose. Then each role is played in a set order with players declaring which role they have selected (unless that role had been assassinated which is the first role to play each round). Once declared players choose collecting coins or new building cards, using their role special action and building, if they can afford it! This game had 5 players, including 2 new, and lasted ~10 rounds before the eighth building was constructed and the rival players were caught with smaller cities and limited cash to quickly erect a cheap building to get extra bonus points (or they had been successfully assassinated!). 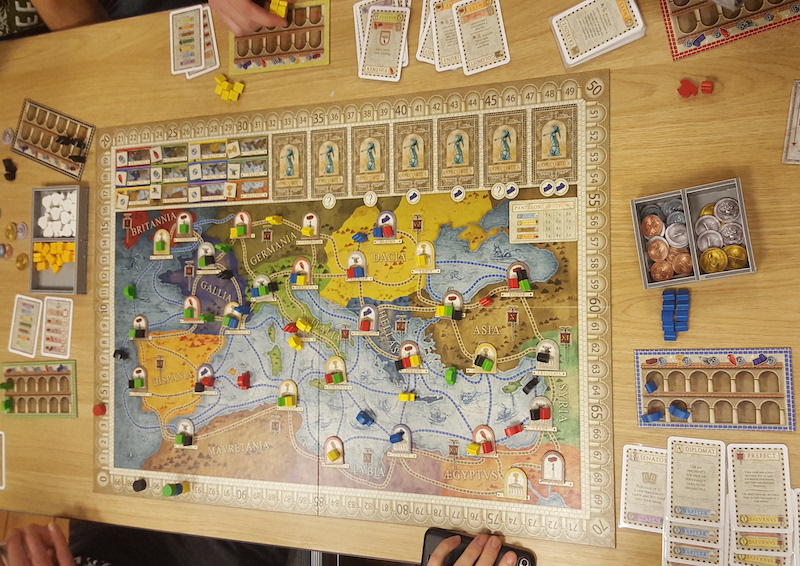 Concordia was back after an outing in session 13 while Viticulture and Power Grid were new to this Club but are high scoring in the Board Game Geek rankings and were popular choices for the evening. 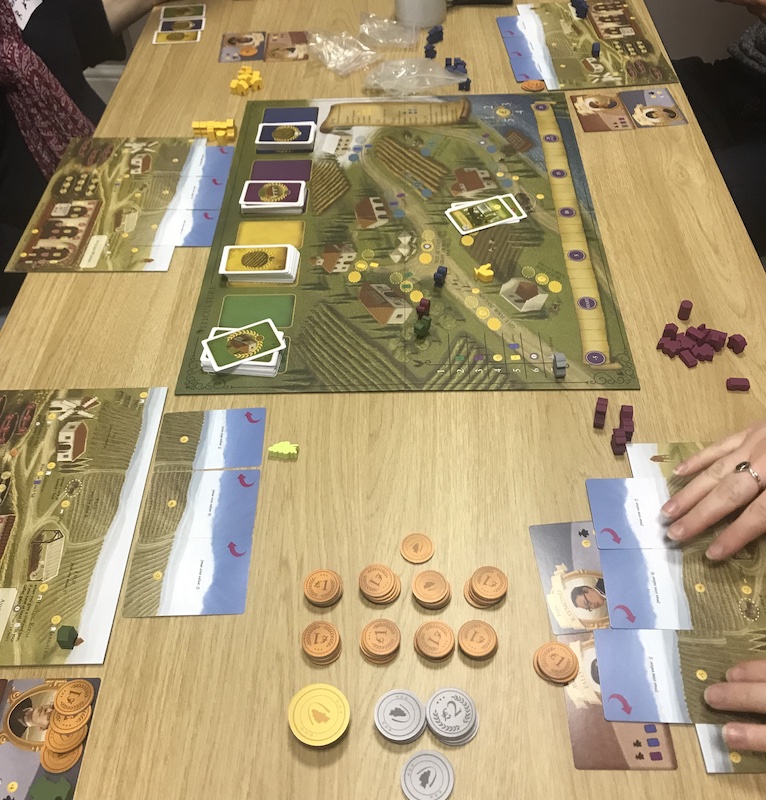 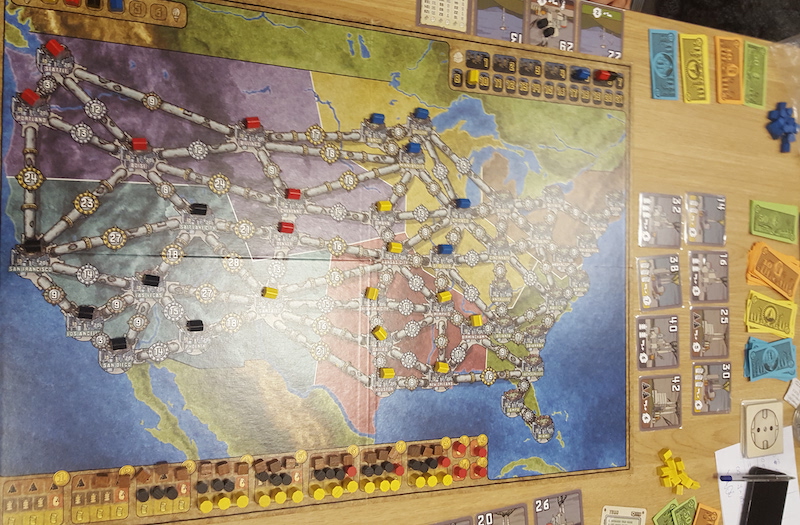 After Citadels finished and a couple of players had left early the table tried Res Arcana, a tableau building magic themed game. Each player is dealt 8 artefact cards and a choice of 2 mages, they can review their cards and select a mage to best match. Then they shuffle the artefacts, draw 3, and start trying to build an engine to generate magical essences (4 types: Life, Calm, Death, and Elan) or gold so they can play more artefacts or power others up. First to 10 points wins, points are generated through acquiring and powering up Places of Power (PoP), buying monuments, or playing powerful artefacts with victory point values. The game is played in rounds with each player taking turns to play actions (playing cards, acquiring the shared PoP or monuments, tapping artefacts for their special abilities, discarding unplayed artefact cards for essence or gold, or sending magical creatures out to attack your opponents) before passing. First to pass goes first next round and temporarily gains 1 victory point, which can sometimes tip the balance in a close game. At the start of a new round players draw a new artefact card from their deck and acquire any essences or gold from artefacts or places with generation abilities. This week a mostly death essence strategy using the jewelled statuette to acquire and power up the Catacombs of the Dead was just beaten by a gold strategy with the Dragon’s Lair and more monuments. 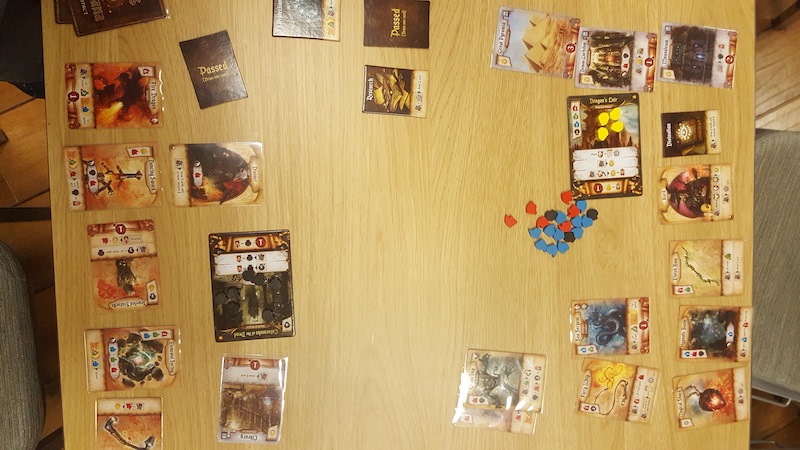 Finally the Power Grid table managed a game of For Sale, a quick and silly property acquisition and then selling game while Viticulture and Concordia were wound up.

This was another successful session with 4 tables well used through the night and some suggestions of games people would like to try or host next time noted.