Seventh Session - An Abundance of Islands

This week was the seventh St. Ives Tabletop session, with 10 attendees in total including 1 new gamer and 3 games tables. The theme of the gaming took us to 3 different islands: 1 cursed, 1 inhabited by spirits, and 1 Scottish.

The night started with 2 tables running short games while we checked who was coming and then broke out the longer games.

Alex P. led 2 rounds of a 4-player game of Senshi, a 15 minute game where you are a senshi or warrior monk studying to become the next master. The aim is to manipulate stacks of discs representing strength, wisdom, agility, and honour - a true master must be strong in all of these, and weak in none.

Meanwhile, Jeremy J. led a 3-player game of For Sale, a 30 minute card game of buying and selling properties, everything from a cardboard box through a houseboat or country mansion to a space station. Phase 1 involves drafting your properties through rounds of bidding. Then phase 2 is about selling those properties for the most profit. A number of currency cards equal to the number of players is turned face up. Each player secretly selects 1 of his property cards to sell - these are revealed simultaneously. The highest valued currency card available goes to the player with the highest valued property, down the chain. So the challenge is to guess which properties your competitors will also be selling that round. 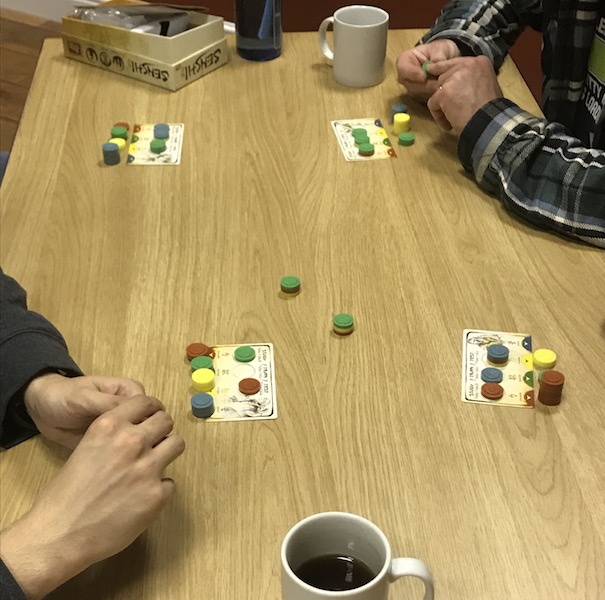 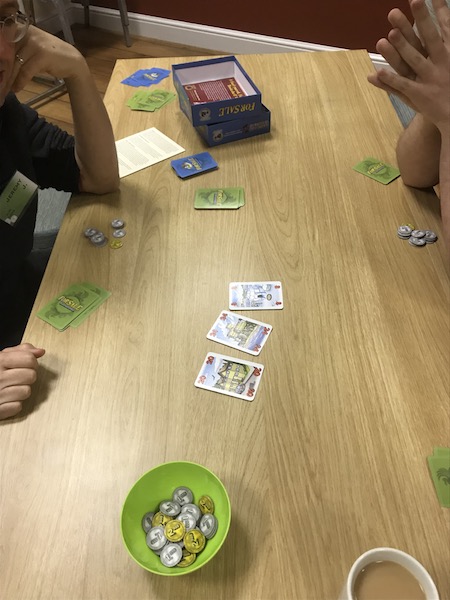 We had promised another session of Robinson Crusoe: Adventures on the Cursed Island, a co-operative board game of survival on the notoriously dangerous deserted island. Kathy J. led the same initial scenario as in session 6 with help from returning adventurer Will B. and 2 new shipwreck victims to see if this party would fare better or worse… The game started more promisingly than the last session, there was less initial loss of health, but the island wood supplies rapidly started depleting, a challenge when the aim of the scenario is building a big wood pyre to aid your rescue. Then the problems with pumas started! In an attempt to acquire enough food for 4 for that night, the soldier went hunting and found a jaguar. Fortunately discharging the 2 rounds left in the pistol that washed up on the beach finished that encounter but left quite a few scars. Then after researching the knife, a second attempt at hunting located a puma with similar damaging results for the explorer that had accompanied that expedition. Then a random event card also had another puma (an upset relative?) invade the camp causing lots of damage. The team gradually began to acquire enough inventions to build the camp, survive the untropical weather, and find enough wood. So by the end of night 9 all but 1 of the party were at death’s door and very pleased to light the pyre and attract a passing rescue ship. 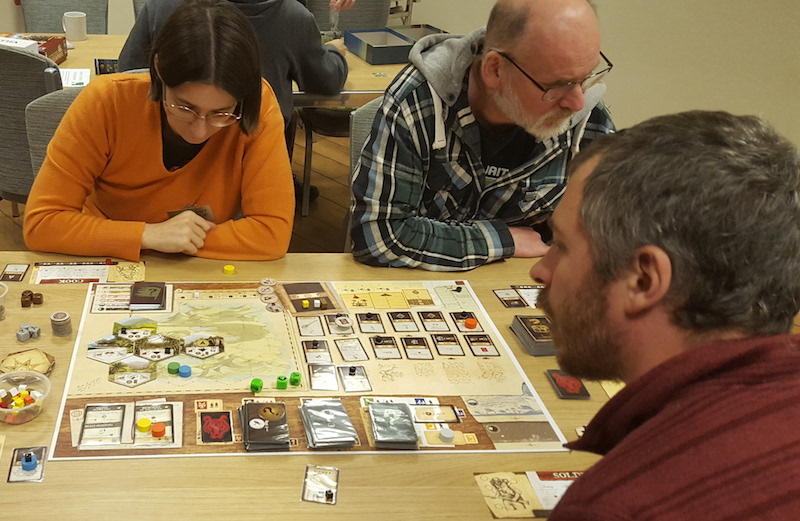 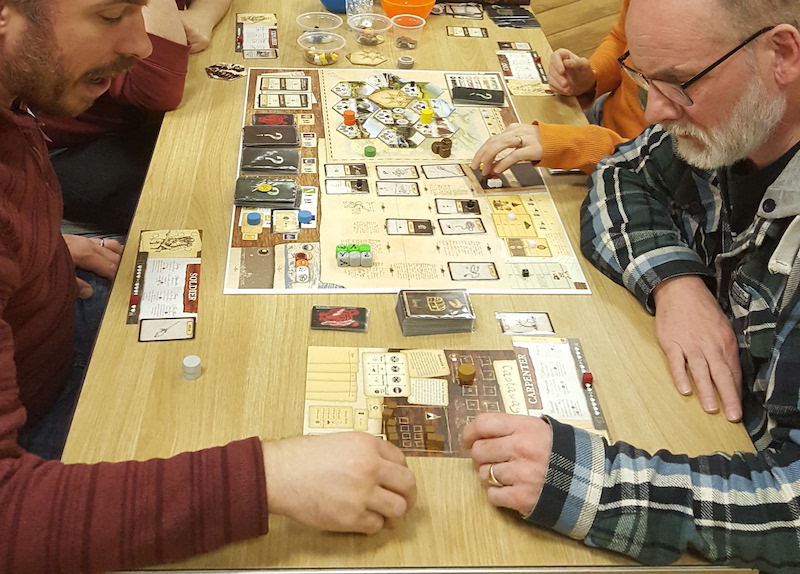 Meanwhile, a different 3-player island based co-operative game was underway on the next table, Spirit Island led by Ross D. This time the theme is defending the island from invaders with each player being a spirit with different elemental powers. Players simultaneously choose which powers to play each turn dependent on available energy. Some powers are immediate while others take time and require planning for maximum effect. Meanwhile, the invaders spread across the island in a semi-predictable manner, but couldn’t stand up to the defence set up by the players. This is a game with a lot of replay value trying different combinations of spirits and interactions of their powers. 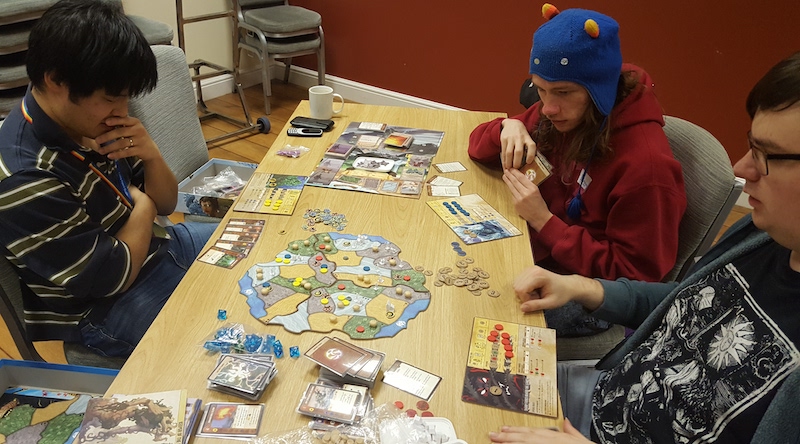 The final 3-player table selected yet another island themed game, this time the competitive Isle of Skye. It is similar to Carcassonne in laying tiles, but instead of meeple placement, there are rounds with various objectives that influence the island building, such as having the most barrels or points per completed mountain range. Another change is the tile selection. Each player gets 3 tiles, 1 they have to axe (and return to the tile bag), and the other 2 they have to put money on. Then each player in turn can choose to buy 1 tile from someone else and pay the same money on it. The player you bought from gets their money and yours. Any tiles you have left, not bought by others, you automatically buy. So you can end up with 3 tiles to play or at worst case none if you couldn’t afford any! The game played that night was very close until the final round when some special scoring tiles made all the difference. 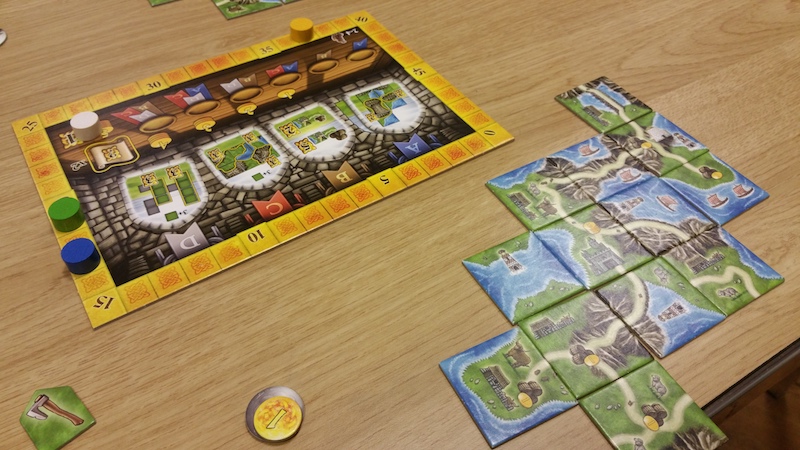 After the usual tea break there was time for 2 more nature themed games, 3-player Evolution Climate that has had successful outings in previous sessions as players evolve traits into their species to survive the weather and predations by the other players. Also a 3-player Barenpark. This is a card drafting tile placement game, players own a bear park, expand your park, make it beautiful with interesting exhibits from koalas to polar bears. 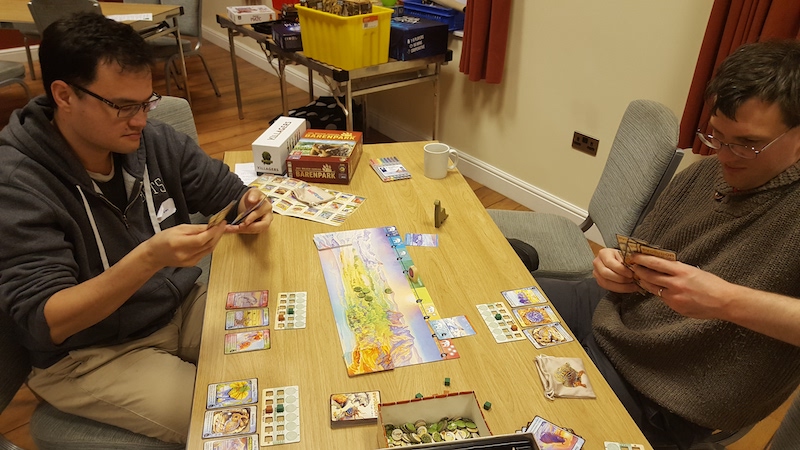 Finally while waiting for the tense end of Robinson Crusoe there was just enough time for a quick 2-player game of Seven Dragons where the red dragons won. 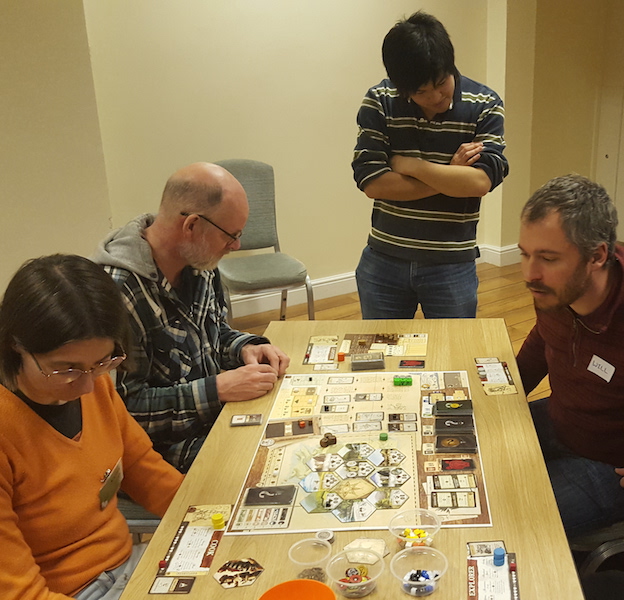 The club is having a short Christmas hiatus but we will be back at the Corn Exchange in the New Year for more games, starting January 15th. Please join us, bring any new games you got as Christmas presents and want to try with new friends or feel free to suggest some games that you would like to try via Discord, Facebook, or Twitter. Happy Christmas!