We had 16 returning gamers at this session, meaning we needed to build a 4-table 4-player crew for each long game.

But first for the short warm-up games! The popular starter The City is now on its sixth session on the tables (for 2 games this session), first played in session 8 (visit that blog for a description of gameplay). It was first time out at the club for The Crew: Quest for Planet Nine, a trick taking cooperative game with a space theme. Many of the nights games involved building, and The Crew is a game with fairly quick rounds so this managed 5 rounds early on and then came back out on table later for another 5 rounds for those who could stay a bit later. This made it the most played game of the night and earned it a name drop in the blog title. 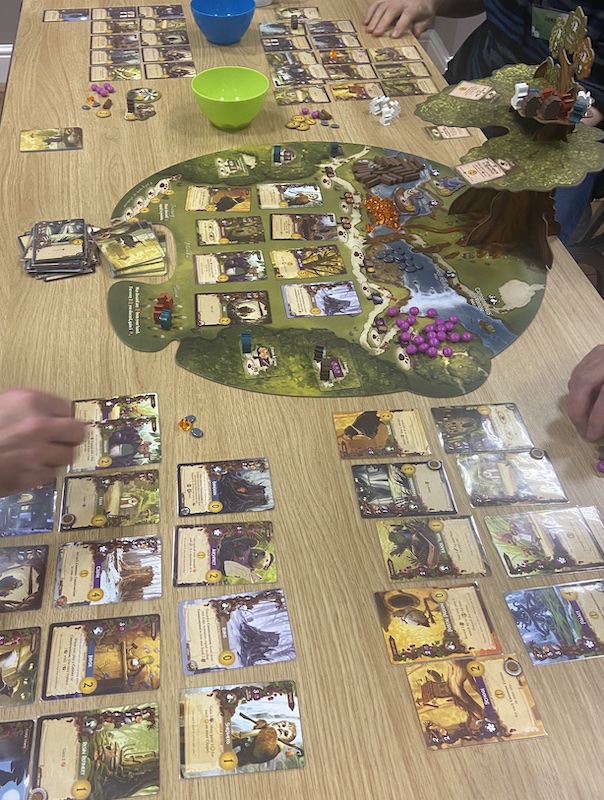 Getting Everdell out at the last Session (23) had stoked some more interest pre-session on Discord, so filling a 4-player game led by Jeremy J. was an easy initial table. The game involves building woodland cities of various constructions that can chain as locations for critters. It requires card and tableau management and worker placement to obtain resources and complete various goals. 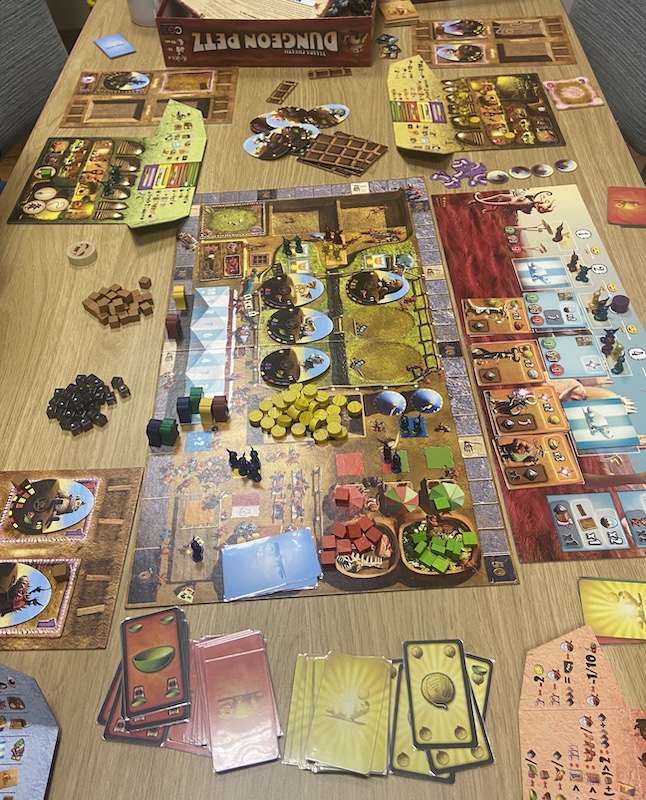 Ross D. successfully pitched a 4-player game of Dungeon Petz. This is a fairly complex game of worker placement and resource management, but with very nice artwork and a fun theme - imps running a pet shop for dungeon lords! The aim is acquire and grow monsters as pets, and sell them on or exhibit them to dungeon lords at the right time to maximise points, depending on which buyers have arrived or which exhibitions are happening - all before the pets need too much food, require too much playtime, become too angry or magical, or make too much mess (poop) for your imps to clean up! 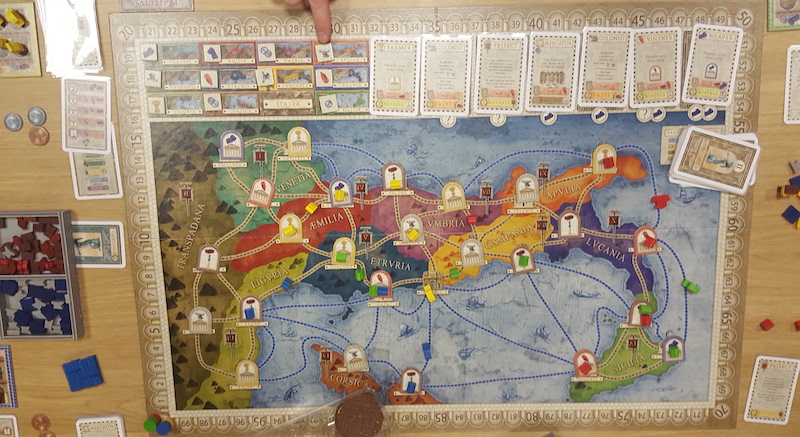 This left the remaining 8 deciding how to split up when Simon W. arrived with more games to select from and Concordia and Cleopatra And the Society of Architects made the final cut. Concordia was back from Sessions 13 and 17, this time a 4-player game on the Italia map. There is a unique anguish in Concordia when someone builds a house in the same city or province as you, you know that means no one is going to help you harvest goods (play a Prefect) there ever again, and in this game Sicily became home to 2 then 3 players and no one wanted to help anyone else that much. Jyo K. managed a solid win after having a should I/shouldn’t I end the game monologue - Simon W. was desperately trying to control his excitmenet at having another turn, but sadly the game was ended and Jyo K. won. The opacity of the scoring right until the last points are counted is what makes Concordia a joy to play, you are freed from the microscopic point tally and left to feel your way at a higher level.

When Concordia finished we lost 1 player, and having little time left after Concordia the table switched to The King is Dead. An Englishwoman, a Scotswoman, and a Welshwoman walk into a bar… and as a backstabbing in-it-for-yourself noble you don’t care. The King is Dead is a abstract area control game currently dressed up as a game of politics and influence in King Arthur’s court, although it has previously been set Siam (now Thailand) as King of Siam. This is one of those games that is simple to explain each part, but new players struggle to see how it all fits together or even work out what to do on their turn. There are two ways the game can end, each with different scoring and a different tie-breaker. The very unique and surprising thing, you only have 8 actions for the entire game. There are 8 regions that are won by the English, Scottish or Welsh, but as a player you decide which faction to throw your support behind and hope they win; or you sell the land out and trigger an invasion by the French and win by leading a glorious defence (against an invasion you probably triggered). The King is Dead is a game that is hard to explain, but certainly worth playing (a few times); it’s not for everyone, but I dispute any board gamer not to be in awe of the design. 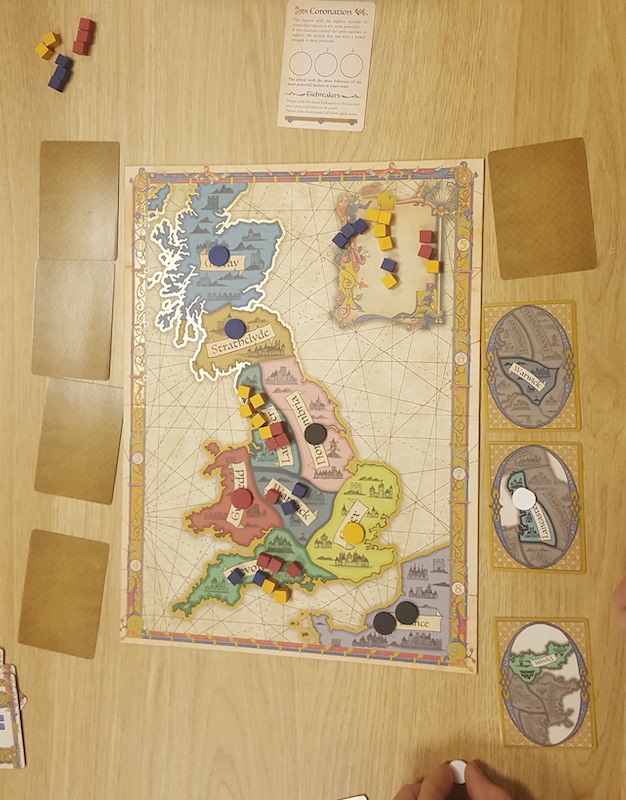 Cleopatra was last played pre-pandemic and actually on the very first club night Session one and also session four. It is a game of Egyptian architects building a palace for Cleopatra, using a market and hand management mechanic. There are 5 main resources, different combinations of which are required to build the 6 palace items (columns, doors, throne, mosaics, sphinxes and obelisks) and each has variations on how victory points are scored. Building multiple items in a round also brings bonuses. However, some resources are corrupted and before the final scoring architects compare their hidden corruption points, the builder caught using the dodgiest materials is then thrown to the crocodiles before the others compare total coins to determine the victor. 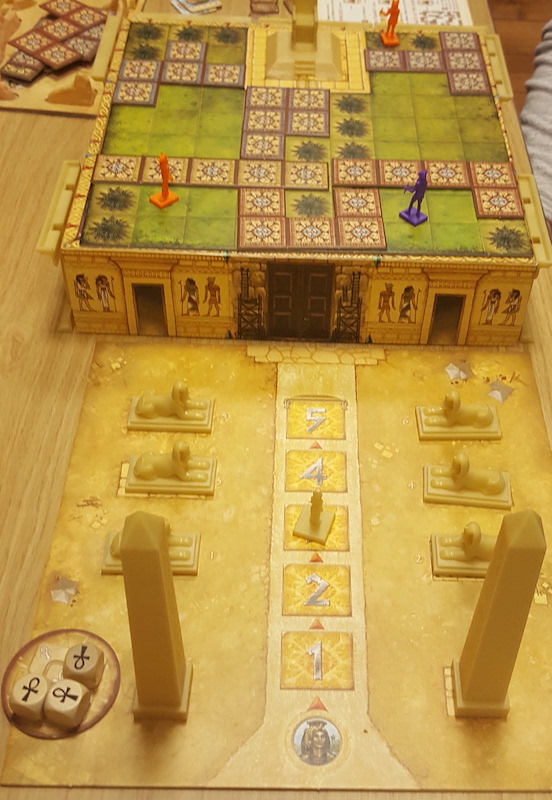 When Cleopatra finished the table switched to Planet, another game back from sessions 1, 4, and 15. This was a switch up in building scale with an entire planet to create and populate. Each player has a magnetic dodecahedron (a 12 sided polygon) that can be covered with pentagons representing terrain. Each round players take turns choosing a pentagon to add to their planet, each pentagon has combinations of 1-5 segments of 5 terrain types. You have entirely free placement on the planet, the aim is to entice different animals to your planet and each has a different terrain preference, if your planet best satisfies those conditions you get the animal card. Victory points are gained from a secret goal based on total segments of a terrain type on the finished planet and the animal cards collected. The rules are very simple so the game can be set-up and explained in 10 minutes even with newcomers, but remains challenging to think three-dimensionally and work out how best to terraform your planet. After an initial play everyone understood the concepts and wanted another try. 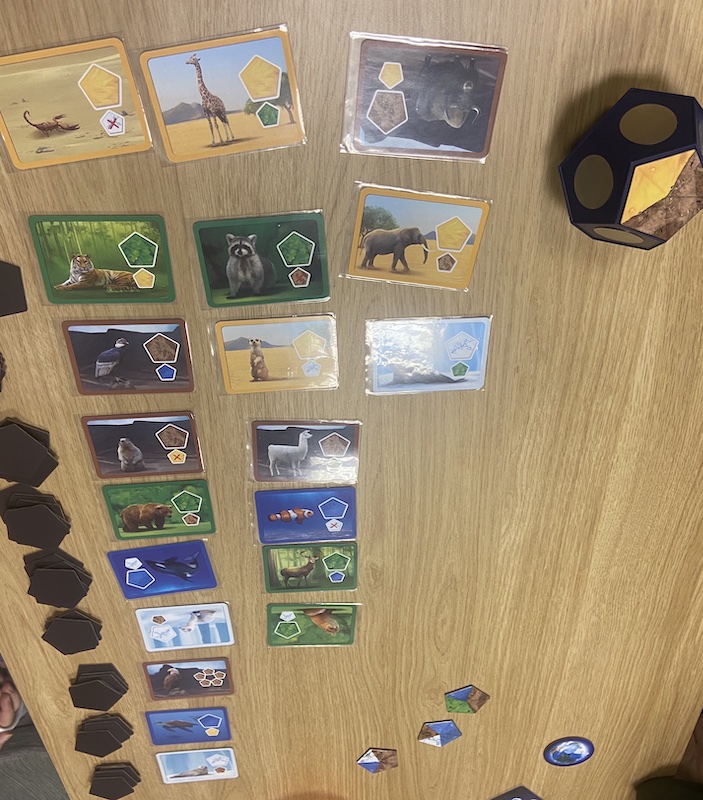 This was a busy night with 8 different games on the tables and 19 actual games or rounds of games played, with some favourites getting replayed and more members getting familiar with the rules and some new games out too. As always let us know on Discord, Facebook, or Twitter if you would like to request a game or want to highlight a game that you will bring and teach, and we will try and accommodate at the next session.