Twelve returning gamers attended the session on a typically chilly February evening. We started with a warm up game of Welcome to the Moon for the first 6 to arrive, with 2 players who had experienced the game in session 21 and 4 learners. People picked up the concepts pretty quickly and soon there were rocket sections filling up, system errors triggered, and finally blast off. There was also a quick game of Three of a Crime, a light deduction game, to divert a couple more members until we reached critical mass and could split up for the evenings long games. 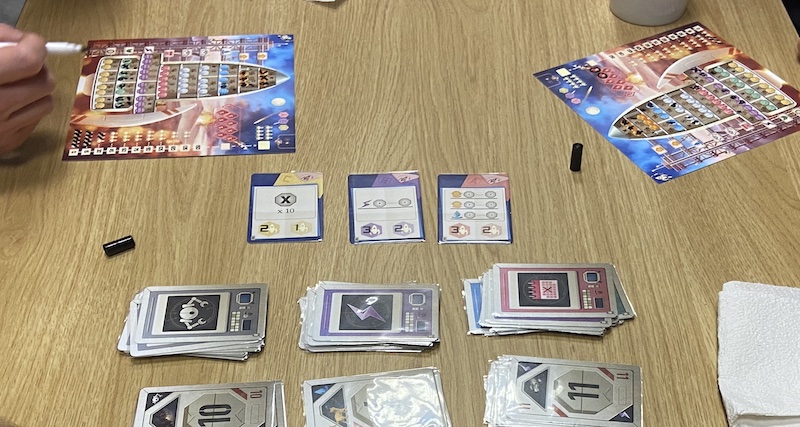 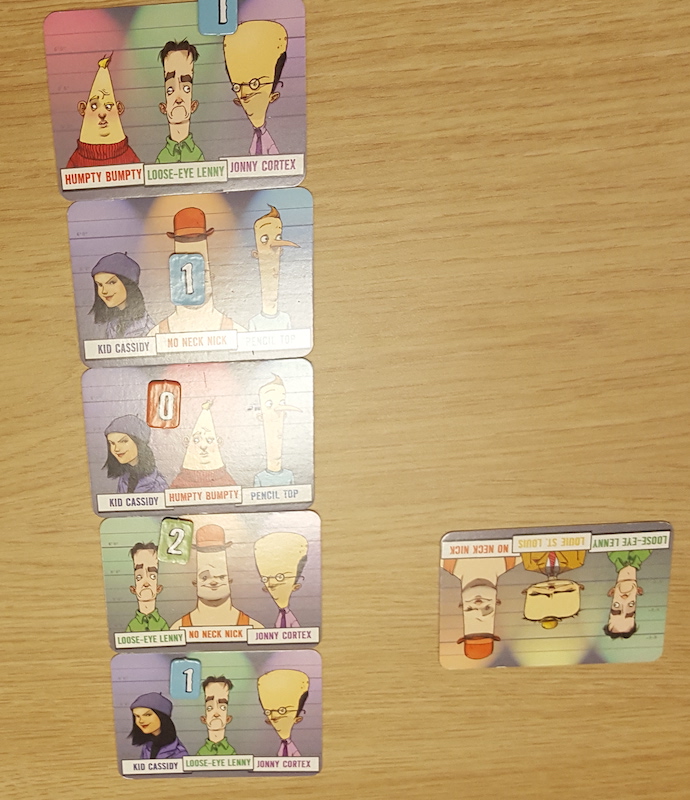 Simon W. had posted a Discord message a few days earlier and drummed up some excitement, if excitment is the right word - perhaps curious interest, for Container. This is an economics game about producing, selling, shipping, and bidding for containers; sometimes you have to marvel at the weird themes of the games we play. The trick being that the 5 colours of container in the game are worth different (secret) amounts for each player. Three players joined Simon W., starting with an explanation of the rules (which are actually not that complicated); followed by a short introduction to macro-economics, specifically the concepts of supply-demand and inflation. One of the dangers in Container is that the players destroy the economy, causing a literal depression where no one has any money to buy anything so no one has any money to produce anything and the game grinds to a halt (it doesn’t kill the game, it just adds an extra hour to the play time as the players claw their way out of an economic depression). Slowly the game revealed itself and there were howls of delight as shipments of containers were won for ever increasing amounts of money; 4 containers going for a mere $12 early but with inflating prices a set of 4 went for $45 near the end of the game. With a winning score of $167, those last few auctions had a huge impact. In fact, that is the fun of Container, working out the value of things and the escalating impact of a sequence of seemingly small decisions. 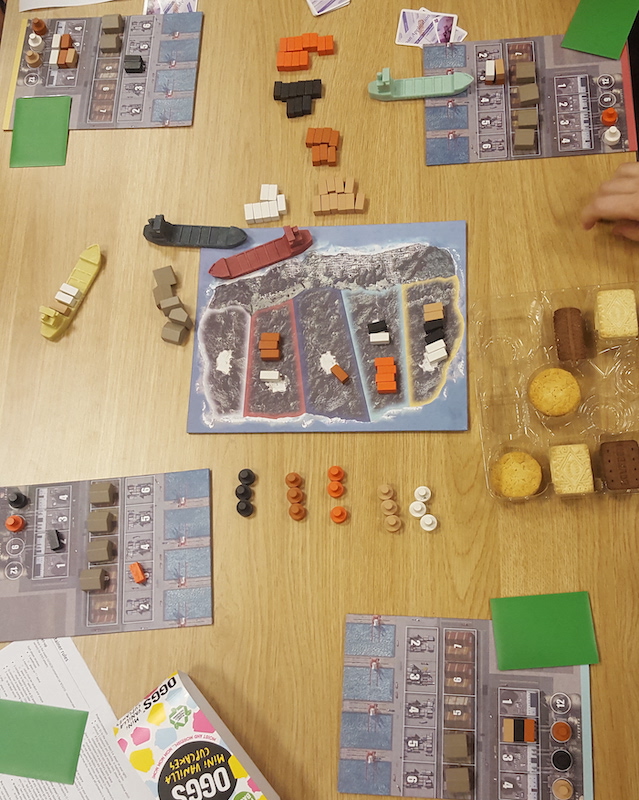 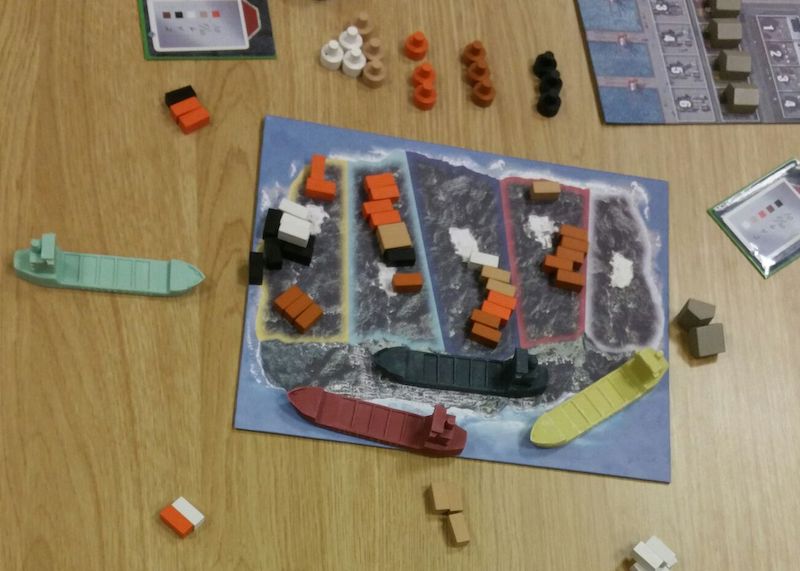 Kathy J. taught a 4-player game of Everdell, which has been requested a few times but the stars finally aligned this session to get it on the table rather than the many other shiny games regularly on offer. Everdell is a game of peacefully co-habiting animals developing a woodland city with gorgeous artwork and components. The game is a combination of worker placement and card choice and play to a tableau. 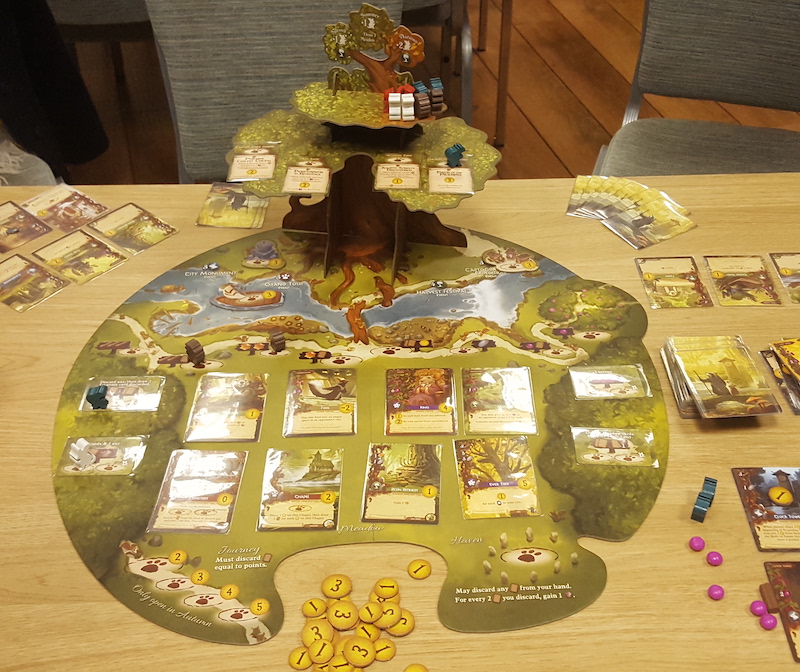 It plays over the 4 seasons starting in winter with only 2 workers and no resources with players taking turns to consecutively play small actions acquiring resources, constructing buildings and recruiting critters until they run out of options, pass and take the end of season bonuses. Each building has an associated critter, if you can play the construction into your woodland city and then find the critter card they can join for free as a later action. 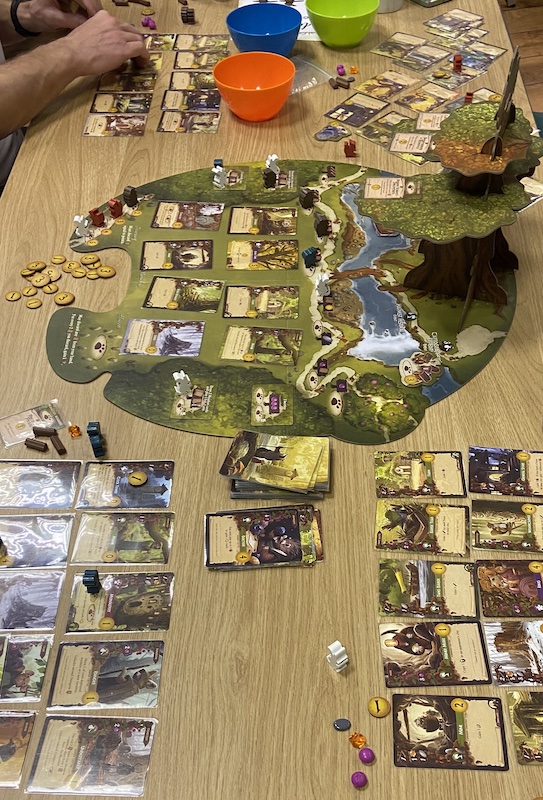 There are a few ways to generate victory points and a maximum city size of 15 cards (constructions and critters) but of course there is usually a card that can break most rules, like the Wanderer that doesn’t take up a space, or the Wife who can share with her husband on the farm. The mechanics are fairly simple, with a nice quirky theme and replay value from randomisation of the the special events available each game and what cards come out of the fairly extensive deck.

Jeremy J. started a 4-player game of Underwater Cities, which with 3 learners was the longest game of the night and possibly our latest finish so far, but had a very close first and second place finish with only 2 points between them. The game plays over 3 eras with players taking turns choosing a coloured action and if paired with a card of the same colour gaining those benefits too. Resources are generally tight and each round only 1 player can use each action slot, so managing play order and decisions on which slot to take are critical. 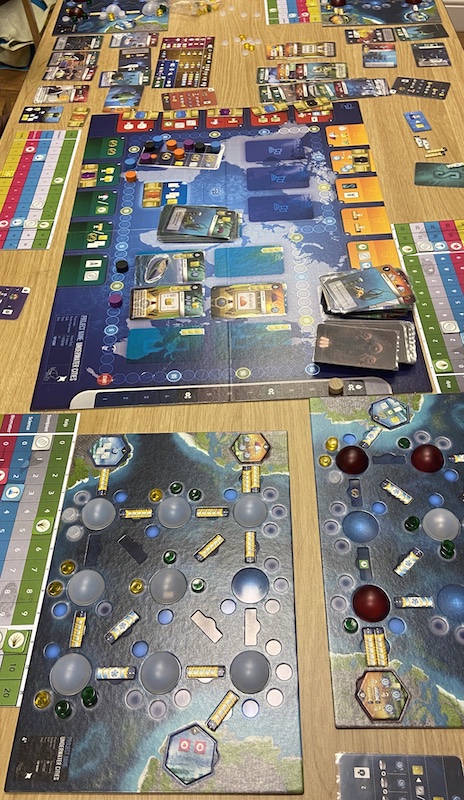 There are multiple scoring opportunities ranging from one-off victory point gains, building city domes, and maximising resource production - unused end game resources generate points and domes with multiple building types associated score more. Each player also has a specific mission and can play end-game scoring cards, which are either picked up in game or bought. 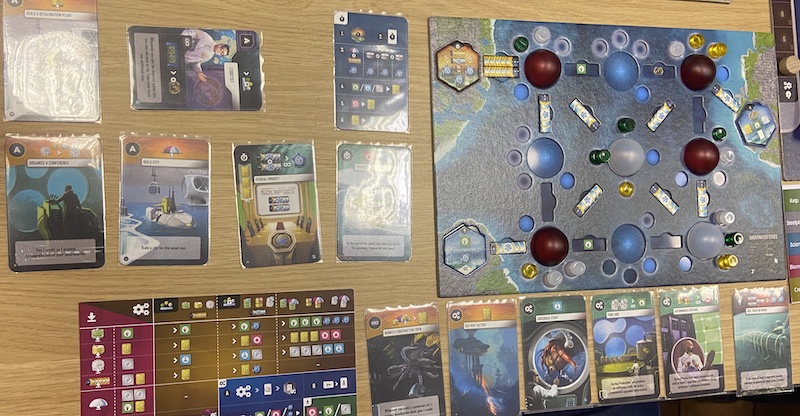 This is a more heavy-weight game, but once players have learned the basic mechanics and symbols on the cards, rounds can progress quite quickly. With a lot of cards, potential to randomise starting setup, and many possible strategies, this is a game with a lot of replay value.

A nice variety of games were played this session and it was good to be able to satisfy some requests! Do keep letting us know what games you would like to try and we can try to find a member who owns it and is happy to bring and teach.