This was a good session on the eve of the Jubilee holiday with 12 gamers across 3 tables playing 7 different games.

Early arrivers started with Big Dig, which had made its debut last session session 30, and then Incan Gold. In the first, players are miners digging out or connecting up various items on the game boards using Tetris style shapes. Incan Gold is a push your luck mechanic whilst exploring a temple - stay longer to acquire more share of the treasure, but if 2 of the same type of hazard appear you lose it all. 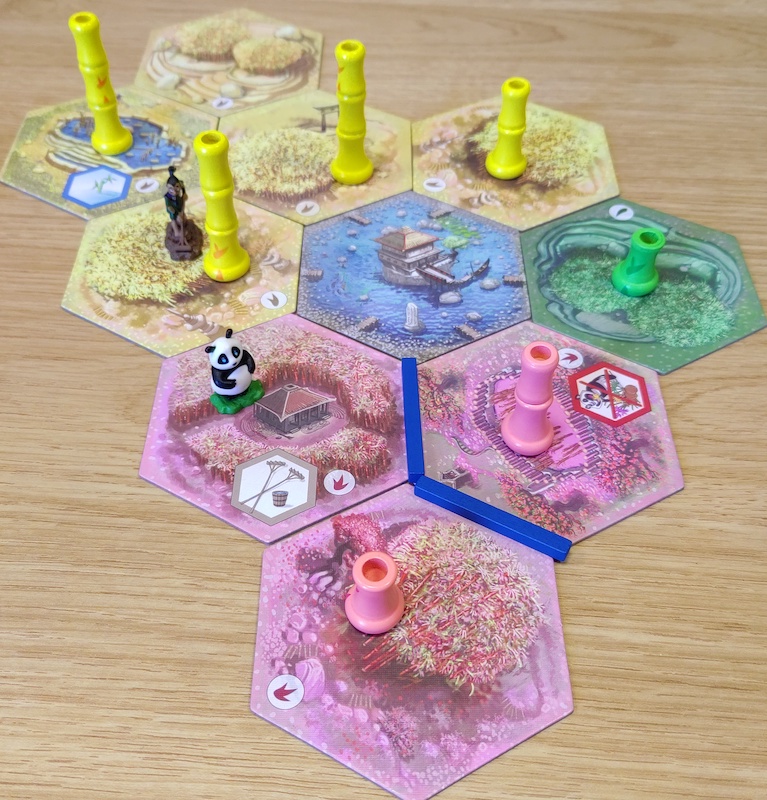 Catherine D. led a 4-player table trying 2 East Asian themed games. First, the table played Takenoko, a game of gardening in the Japanese imperial court with a hungry panda on the loose, and then also back from the previous week session 30 - Namiji, a game of fishing off the coast of Japan. Takenoko has 3 types of goals (growing bamboo towers of certain colours to specific heights, placing garden tiles in certain patterns, or feeding the hungry panda certain colour combinations of bamboo), with different goals worth varying numbers of points. Each turn you only have 2 actions (although the weather dice provides a random bonus each turn), including moving the gardener to grow bamboo, and moving the panda to eat it again. The game ends when a player reaches a certain number of goals, and the points are added to find the winner. 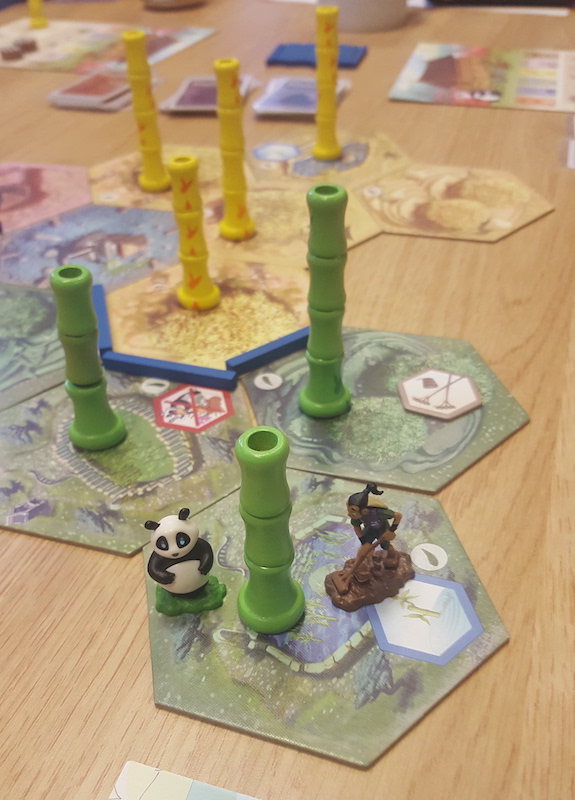 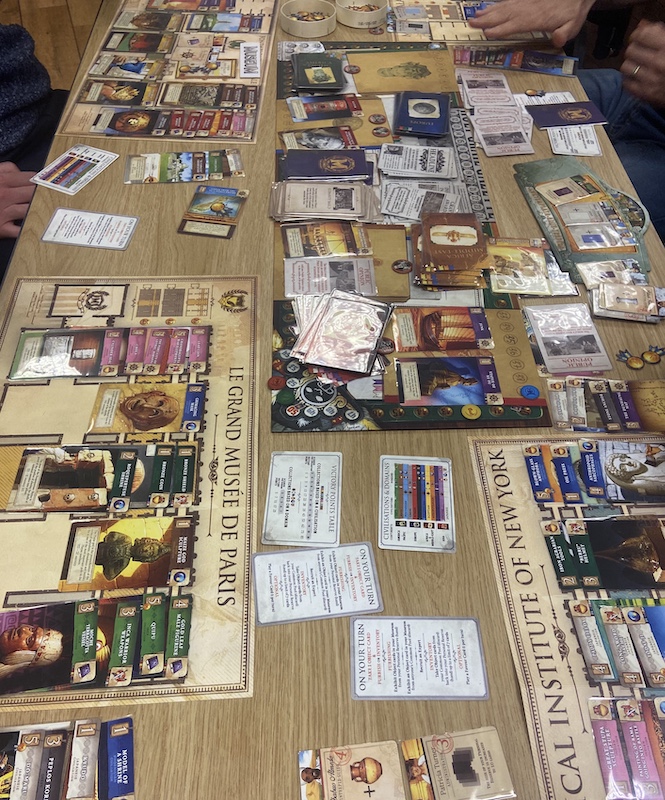 Jeremy J.’s table chose Museum, back for its second play at the club, and last seen in session 20. It had been a few months since this one had been played and so there were a few glitches in explaining the rules, but soon the 4 Victorian era curators were filling their museums with interesting artefacts and trying to obtain the best display based on sets of either geographical or artefact types. 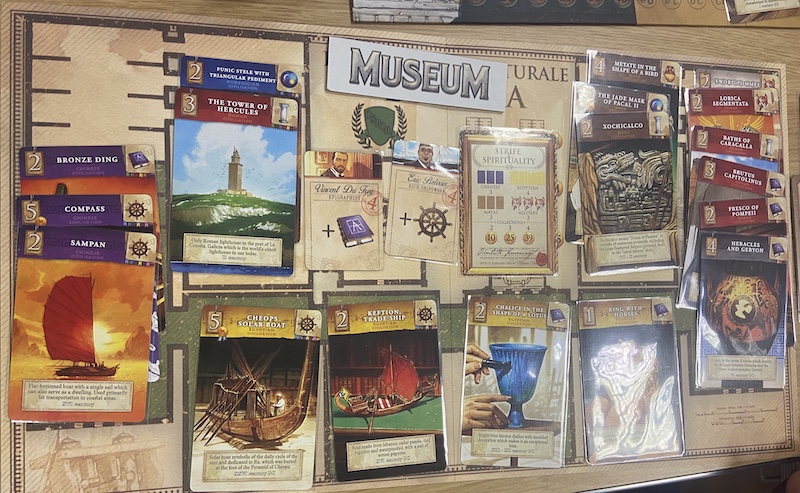 Rich W. had brought Automania and so the final table settled down to building, customising, and shipping cars for autobucks and victory points. Each player is managing a car factory, producing 3 types of cars. There are different but intersecting conveyor belts for each car type, and the different parts of the factory can be upgraded for overall quality or specifications like speed or safety. The game runs over 4 rounds and each round the US and European markets change to favour different specifications changing their value. Upgrade the production line, generate cars, choose which market to sell to, load up the ships, and then sell at end of round by highest value car first. To do well you need to balance money versus victory points earned, and loading ships with cars early in the round to sell for higher or getting the best factory upgrades. In the end it was a close game with only 1 point in it for first place. 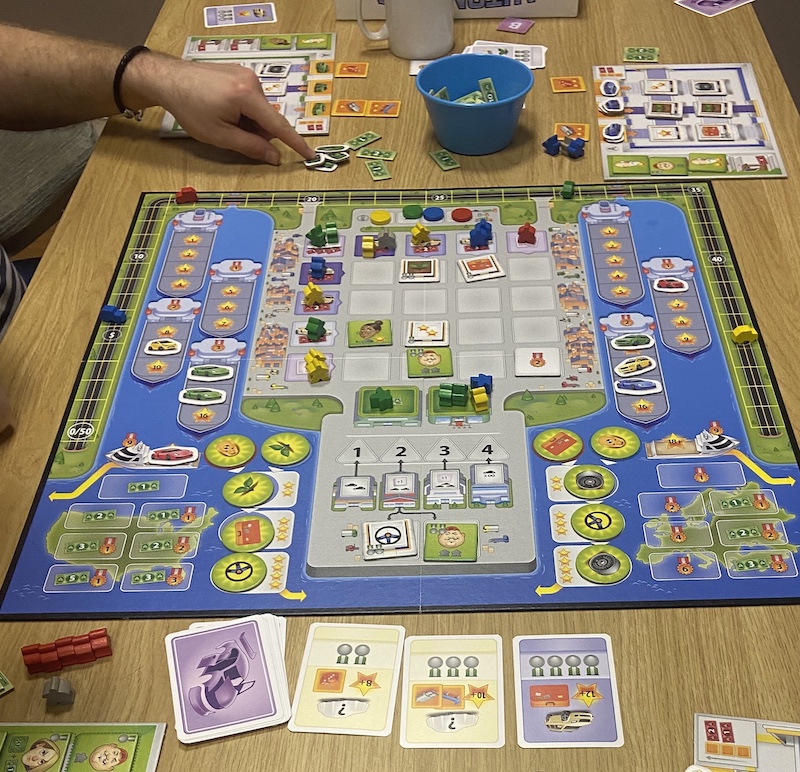 All 3 longer games finished at about the same time, and so those that could stay later all joined up for a final game, Welcome to the Moon, which was back from session 28 for its fourth outing. This was a nice short game (approx. 20 minutes) of flip and write to finish on. Every player has the same setup and options over the game, so the winner is determined by who has used those most effectively. As there were a couple of new players we used the initial board, where the is aim to load your rocket and blast off first. Natasha M. made best use of filling compartments to gain their bonuses and set off for the moon. When enough members know the basic rules we should be able to try the more advanced boards (there are 8 in total, subtly changing the rules each time) progressing through arriving on the moon, setting up the colony, surviving a virus, and finally fleeing again to search the stars for a new planet to colonise.

The next session is June 15th - we hope you can join us! Do watch out for the pre-session Discord posts where there are some discussions of game requests and pre-night bookings of longer games.