The stars aligned… and most of the committee were busy. Thankfully, several people stepped in to teach or run games. We had 16 gamers attending, including 1 new face, and playing 8 games (6 new to the club) over 4 tables. 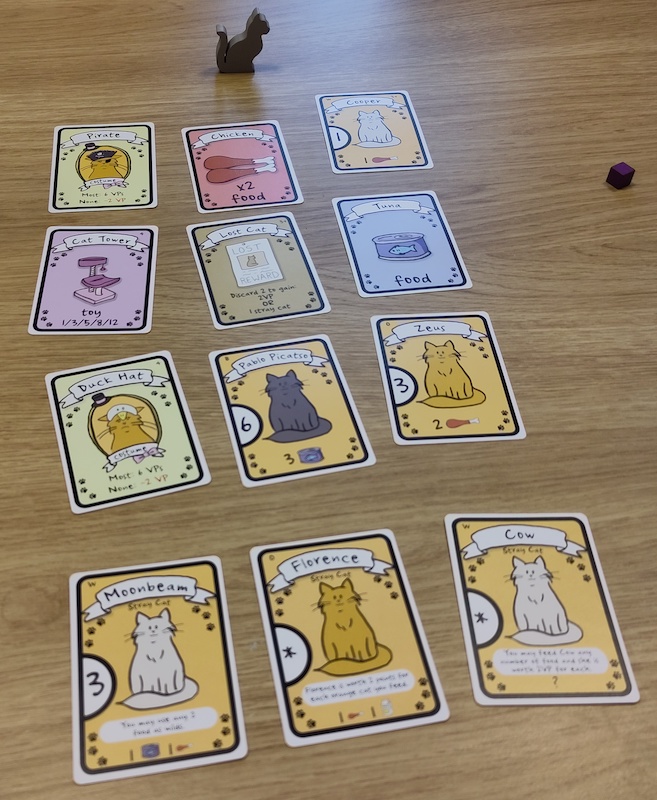 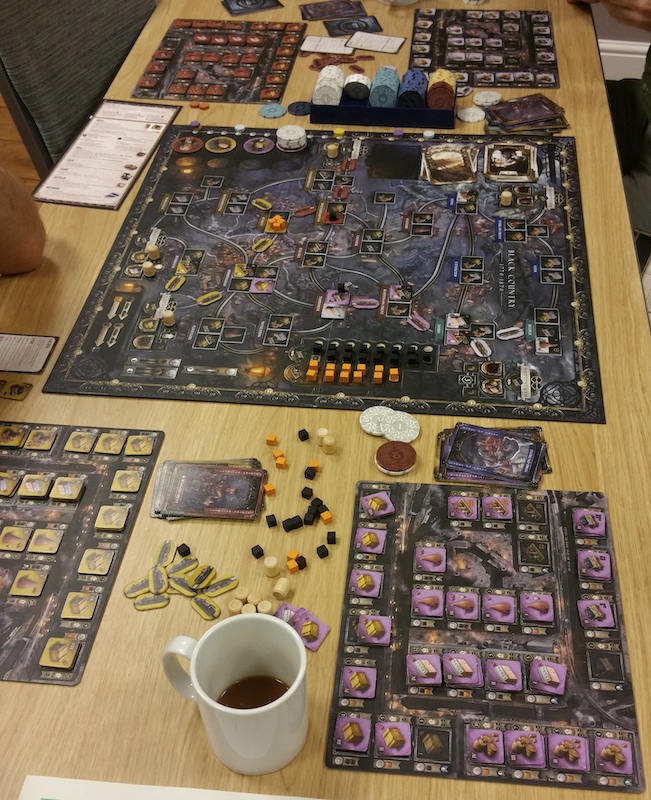 While the starter games kept people busy, a dark cloud of smoke and ash formed over a table. Brass: Birmingham was back (from Session 30) and getting set up ready for 4 industrialists to make their fortune. Brass: Birmingham is a heavy economic game about building industries and canal/rail networks across the Midlands. There was an open invitation and 4 players sat down for this delight, although sadly 1 player had to leave before the game ended. This was the first big game to start, but the last game to finish for the evening; Brass is a beast in many ways. There are 2 sides of the board, light and dark, but clearly we only play with darkness. 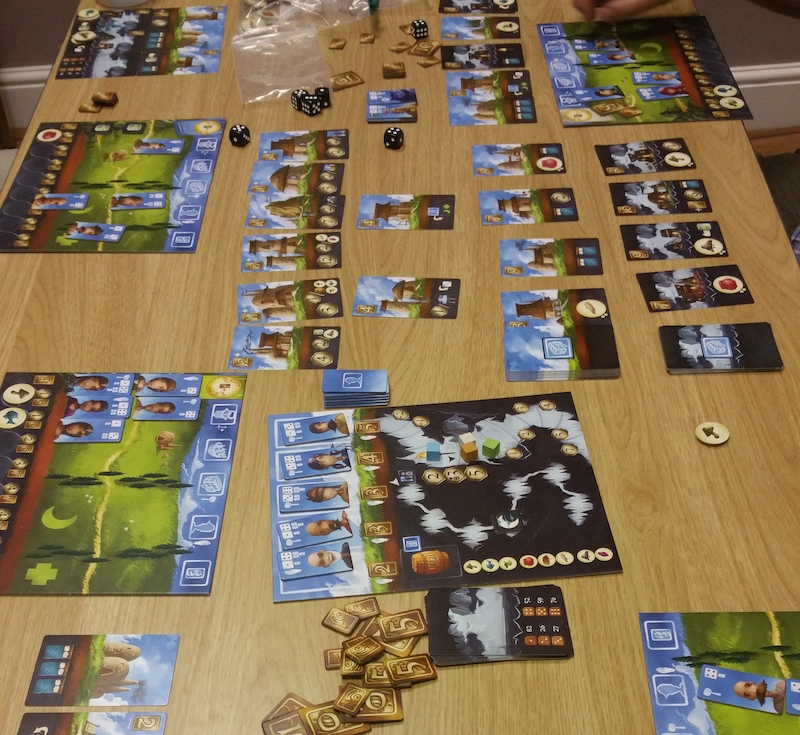 While Brass darkened the skies, there were new adventures to be had in the deep (no not Lord of the Rings, no Balrogs here), rather Above & Below. A game about delving in the deep to find treasure and fortune (and most importantly collect/grow mushrooms). It is a game by Ryan Laukat (also Near & Far, Sleeping Gods, Now or Never), with a focus on telling a story using a book of descriptive paragraphs for each adventure.

All was quiet in the deep dark wood. Oh help, oh no, it’s a… cat? Root was back again (from Sessions 32, 33, and 35). A number of cute-looking woodland creatures battled in the dark places under the forest canopy. Four players performed a delicate dance of asymmetric powers and victory conditions. The Vagabond and the Marquise formed a comfortable alliance, and it looked like another Vagabond victory was on the cards (the Vagabond has been unbeatable thus far, and has been the winning faction in all our previous plays of this game). Finally, despite going into turmoil earlier in the game, it was the disciplined bird government of the Eyrie Dynasty that triumphed, by placing all their roosts on the board.

The fourth table decided to play a few shorter games (Brass, Root, and Above & Below continuing to the end of the night). Four players fumbled in the darkness looking for the Cryptid, in a competitive deduction game. Each player has a unique clue and when all the clues are combined they define a unique location on the map. Through careful deduction, keen questions, and a bit of luck a light bulb moment occurs. The first game was confusing and cut short by an excellent educated guess, and so the table started a second game; this time just confusing. There were many moments when a player definitely knew the answer… only to discover it was wrong. One great part of Cryptid is that an incorrect guess does not eliminate a player. 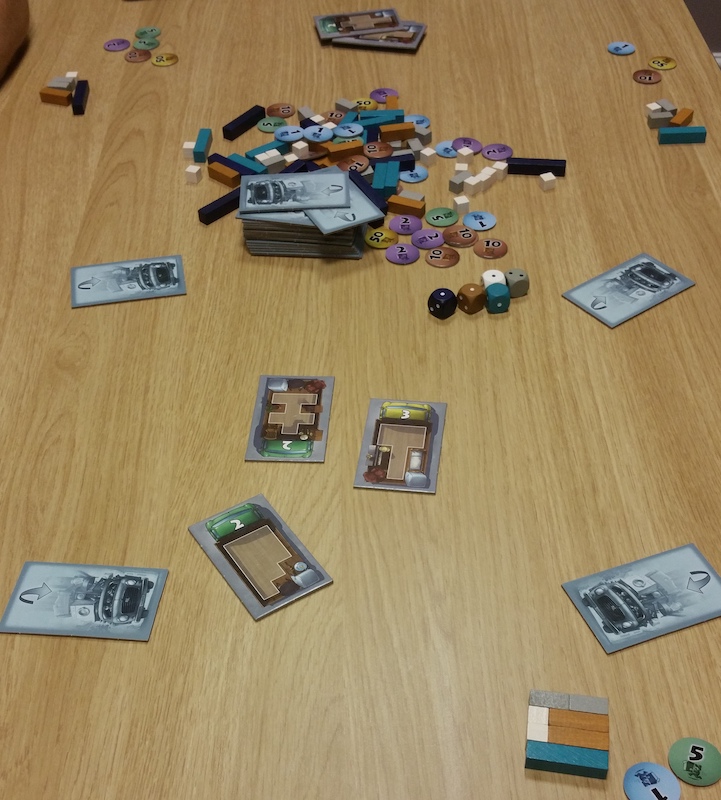 With their brains tied in logical knots, the fourth table switched to an entirely different style of game - stacking furniture on a removal truck, at speed. Pack & Stack has an element of speed reaction, when you must claim a truck, but is really a silly game of trying to stack wooden blocks on to a truck when they clearly will not fit. Points are lost if blocks that do not fit, and for empty space… a good removal company is efficient after all. When someone hits 0 points, the person with the most points is the winner. It’s silly and light, which was a much needed change of pace after Cryptid. The first game led quickly to a second, both ending in much laughter as someone wonders aloud how it has all gone so wrong. 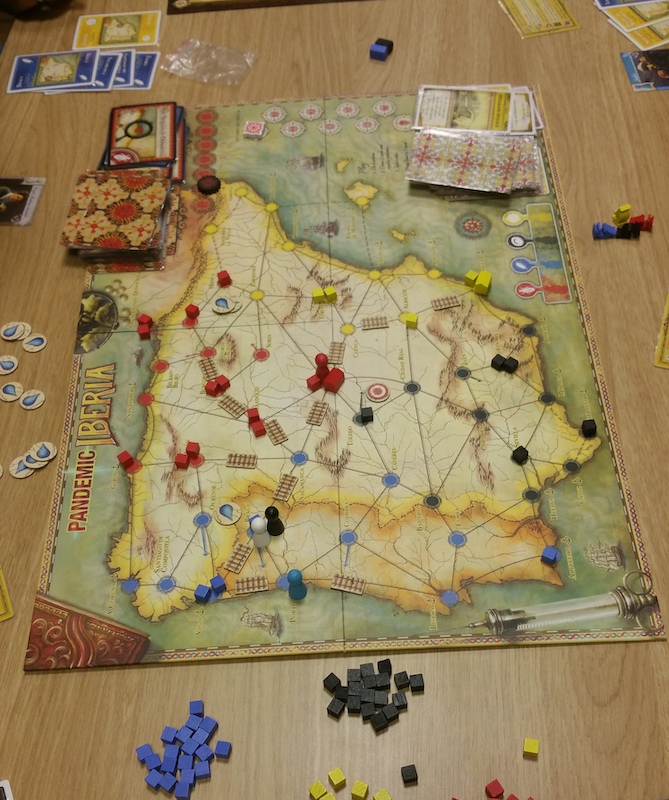 Seeing the other 3 tables still deep in their games, and with plenty of time left, the fourth table began its third game - a variation on a classic - Pandemic: Iberia; a nice co-operative game to end the evening. Pandemic: Iberia is very much like Pandemic, with a few tweaks to the formula. Unfortunately, the Mediterranean coast exploded and the game ended rather too quickly. So we quickly reset and began again (our sixth game of the night). This time the starting disease cubes were more evenly spread and a much more enjoyable game was had. Playing at the normal difficulty (5 epidemics), we worked towards a greater understanding of the diseases (there are no cures in Pandemic: Iberia).

The next session is on Wednesday 24th August. Please join us - there is sure to be a wide variety of games on offer! If you want to request a game, drop a post on the Discord thread and we can do some pre-session matchmaking.