The games this session had 2 definite themes: temples and volcanoes, or stocks and trading. It was a lively session with 12 returning gamers enjoying the aircon at the Corn Exchange on a hot summer day and playing 8 different games. 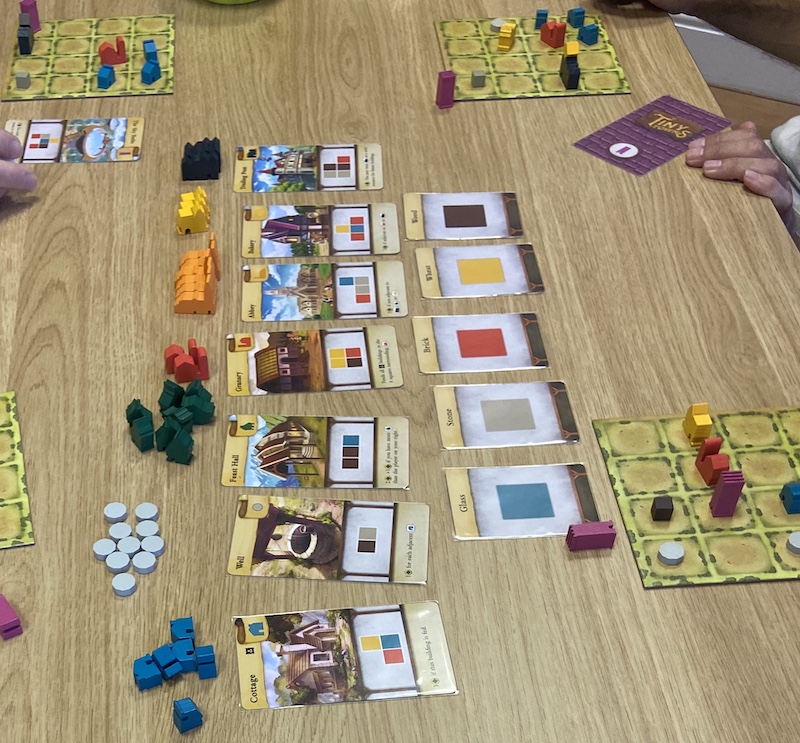 Starter games were Big Dig, back for a fourth session as warm-up game, and Tiny Towns, which had been introduced the previous session. 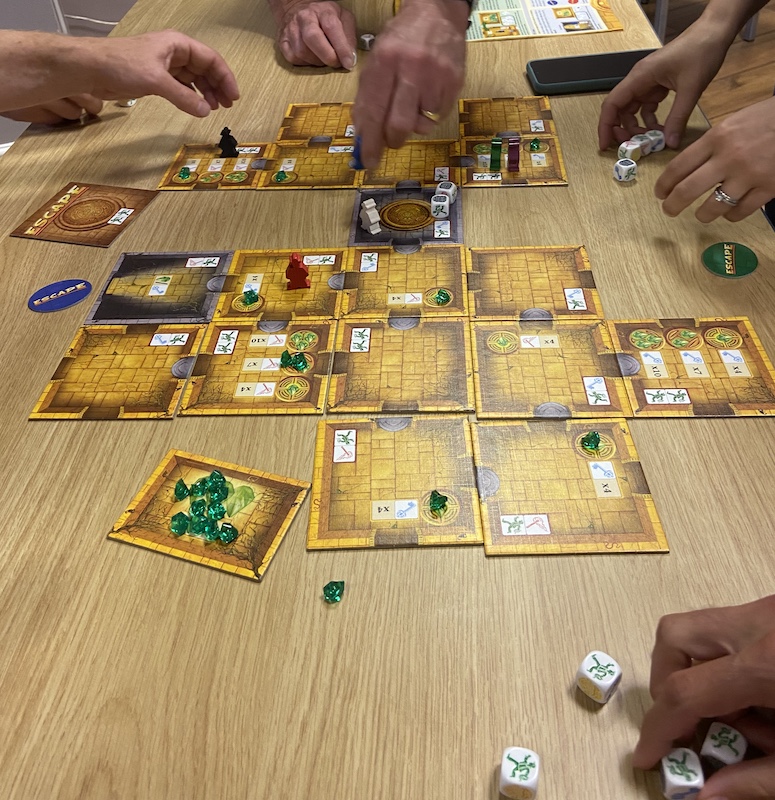 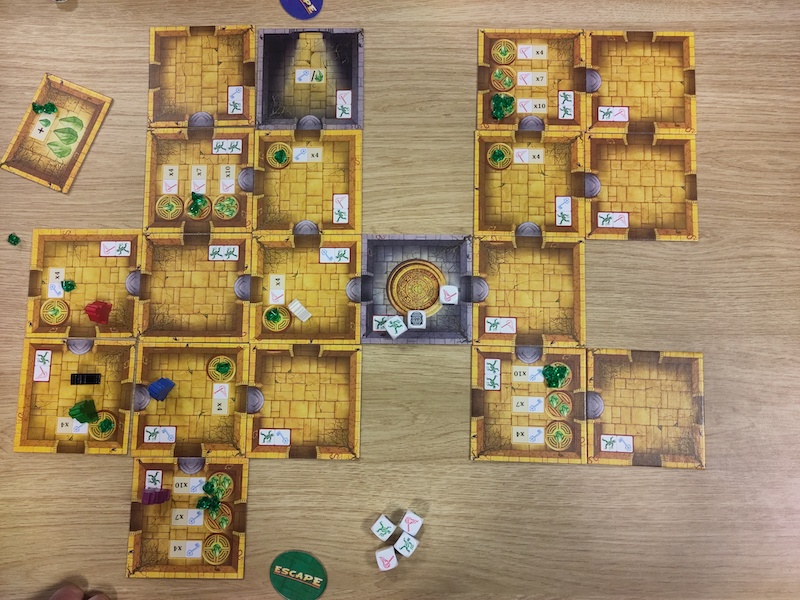 Will B. had requested prior to the session via Discord a game, or as it turned out three, of Escape: The Curse of the Temple. This is a cooperative escape game with frantic music playing in the background and equally frantic dice rolling. The chairs had to be moved out of the way so that players could stand around the table to see all the action and interact. Six can play and games are only 10 minutes, so 7 gamers swapped in and out for the games, the first 2 with the base game and then a third with curses and treasures added. Dice faces allow different actions including exploring the temple, revealing new rooms, and finding treasures, before finally all players race to reach the exit tile in time. Dice can get locked by rolling the black mask face making it more challenging to achieve the right combinations on the remaining dice to explore or loot. The golden mask face can unlock dice and other players whose explorer is in the same room can help unlock or achieve goals. The first game was a loss with a few explorers left behind, the second game a success with 10 seconds to spare, and the third game was close, but 2 people got left behind (a euphemism for buried in the collapsing temple). This was a noisy and adrenaline pumping start to the session. 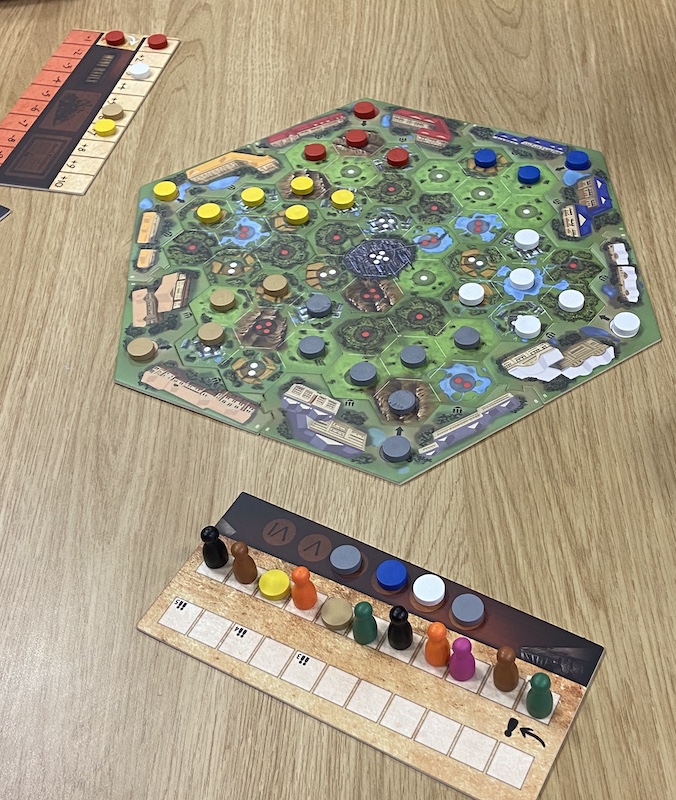 Meanwhile, Simon W. was teaching 4 others Mini Rails, a train-themed stock-trading game back from session 28. A simple concept with only 6 rounds and 2 actions possible each time but a lot of strategy behind it with crucial decisions on boosting the scores of certain colour stocks whilst ensuring you own those stocks to benefit. The really interesting feature of the game is the way selecting actions also determines player order for the next round, that and only having 12 actions in the entire game. The variable map and variable options each round make keep the rather simple game fresh. 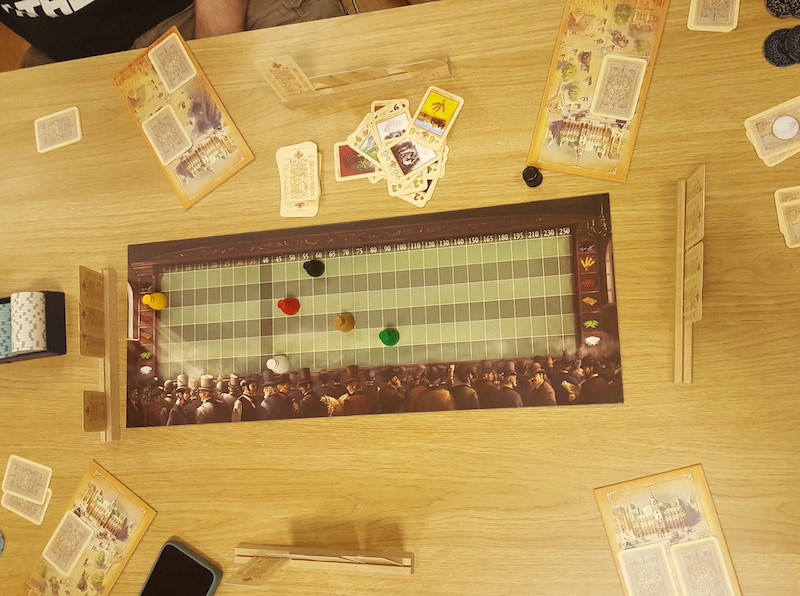 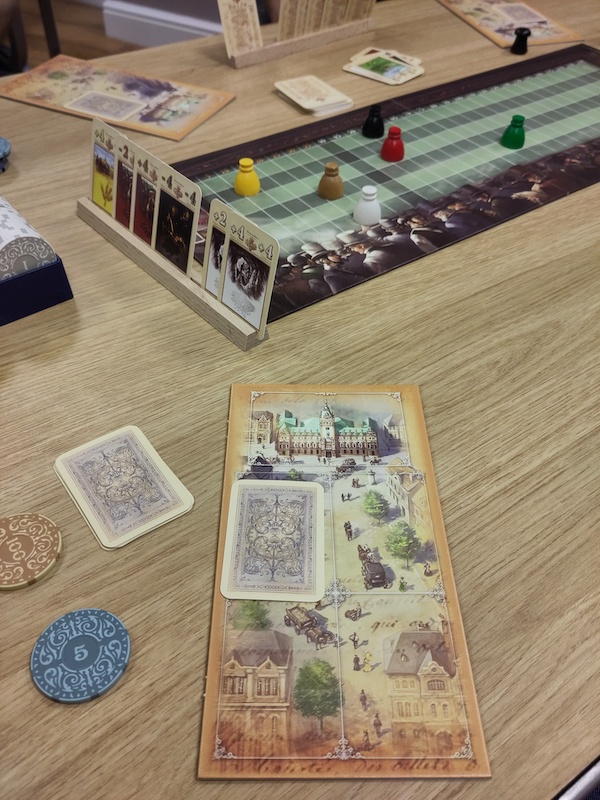 Simon W. followed this up with a 4-player game of Hab and Gut about stock brokers during the industrial revolution. It is played over 2 rounds, and in each round there are turns of stock pricing and stock trading. First each player takes a turn manipulating the stock prices - by choosing a card from a selection that can only be seen by them or the player to their left, and a card from a different selection on the right (that can only be seen by them and the player on their right). Once everyone has tanked or inflated the stock prices, everyone gets a chance to either purchase or sell stock (up to 3 cards), and optionally donate a stock to charity. Play continues until there are no stock manipulation cards left. The round then ends and the charity donations are cashed in. The next round, new stock manipulation cards are dealt and play continues. It is all about making the most money, but the stingiest player, with the least charity donations, will automatically lose! 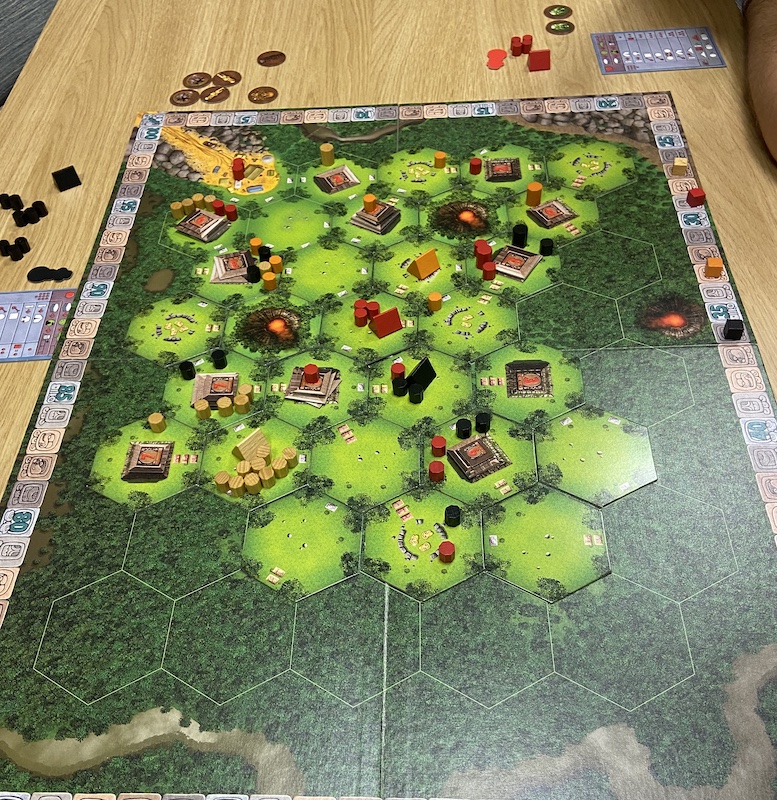 Kathy J. brought back Tikal from session 2, a classic game set in the Central American jungles of Guatemala, discovering temples and treasures in the overgrown ruins of Tikal. Each turn players place a new hexagonal land tile on the board and have 10 action points to best use to move their meeple explorers, discover, uncover, and achieve area control of temples, or dig up treasures and swap them to make sets for more points with the other players. Three times during the game when a volcano tile is revealed and once at the end, when the last tile is placed, a scoring round commences. Turn order is important to make best use of action points and stealing control of temples from the previous players. It has simple mechanics to teach, but some luck in the tiles drawn may have influenced the final result. Next time we could play with the tile auction rules to mitigate that. 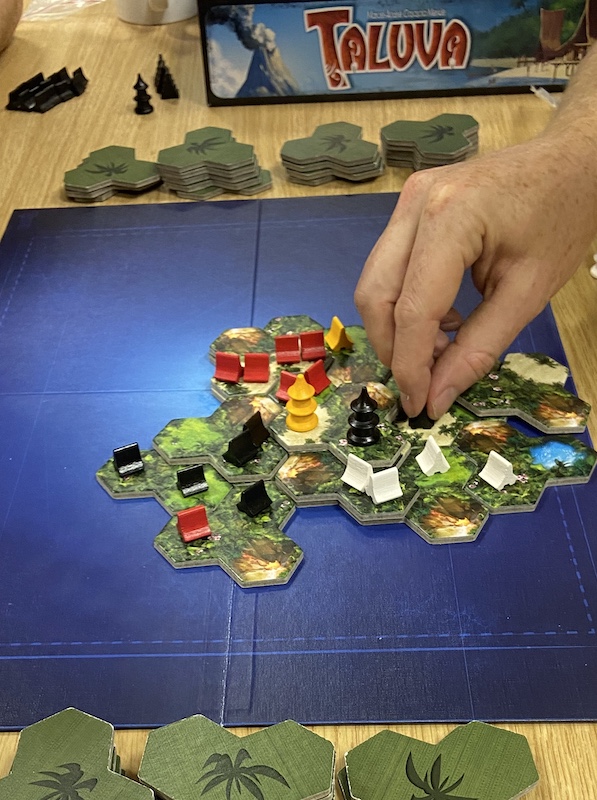 Meanwhile Nathan B. had brought Taluva, a game set on a South Sea island emerging from the waves due to volcanic eruptions. Each turn players must add land to the board, either adding land to the side or adding height to previously placed tiles. After that players can place buildings or, based on placement rules, upgrade their buildings. The game ends when all tiles are placed or a player has exhausted their building stocks of 2 building types. This is a very strategic game requiring multi-level thinking.

Finally, there was time for the some players to have a go of Tomb Trader (first tried last session), trying to make it out with the most treasure by bartering. Simon W. scored a definite haul by collecting 6 pieces of the Treasure Map. This was an enjoyable quick game at the end of the session.

The next session is on Wednesday 27th July. We are hoping for cooler weather and a drop in virus levels to allow more gamers to attend. Hope to see you then!