It was our first session back since an extended holiday season break, but it was well attended with 15 returning players and 4 tables active. There were a few club favourites out, but also some new Christmas present games on the tables. 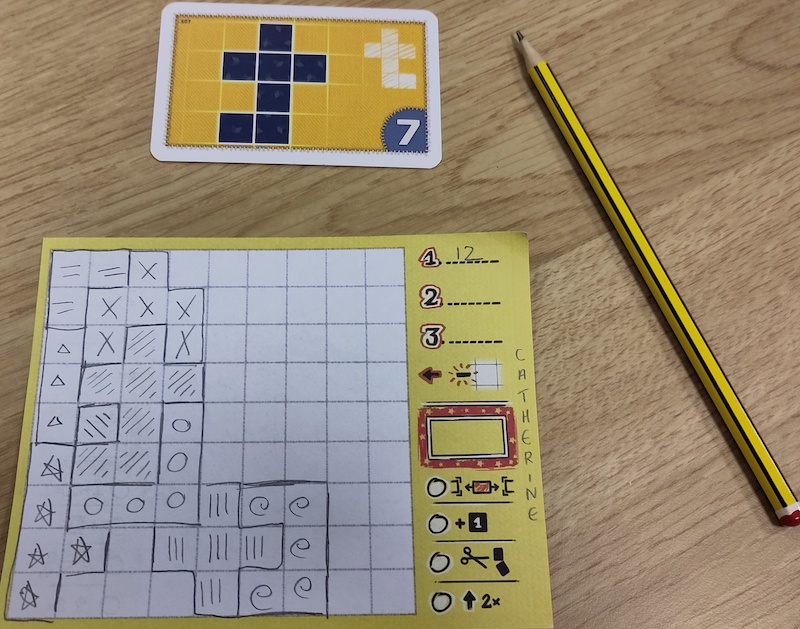 The short games this session were all returning to the tables, with Patchwork Doodle and Tomb Trader starting the session, whilst Subastral and Ninja Camp came out at the end. 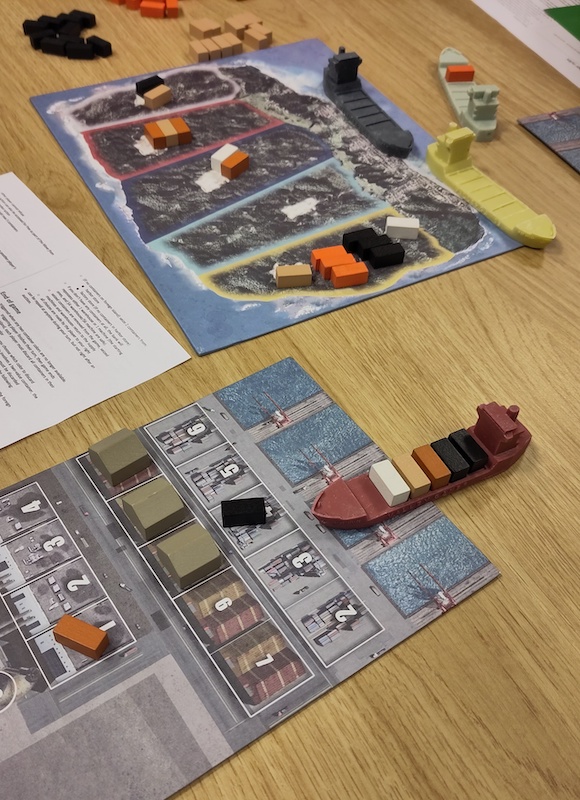 A game of Container had already been stacked up on the Discord channel, and so Simon W. set about teaching a few new players and some keen repeat customers. This was a third play for Container, back from sessions 23, and 31 so please visit the previous blogs for a longer explanation of this economics and shipping based game. The 5 players were certainly making a lot of noise with some interesting auctions by the end of the game. 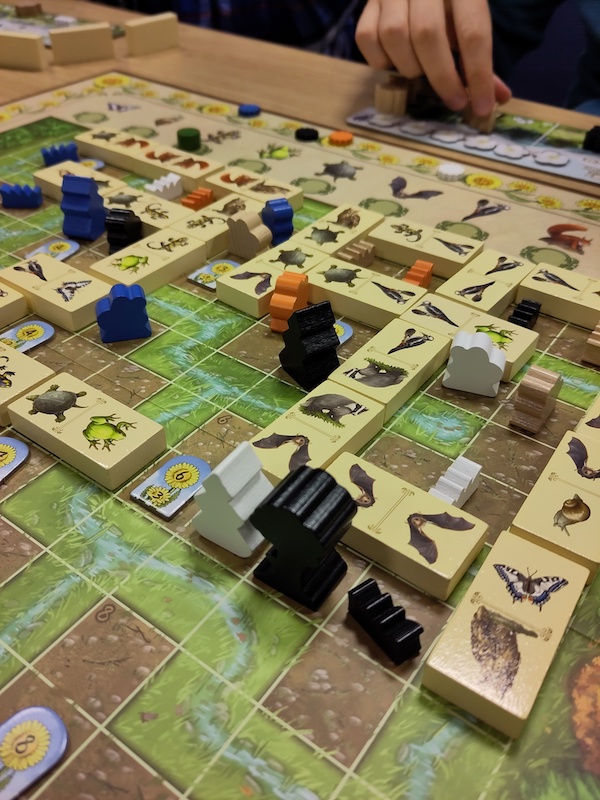 The next table selected what would seem like a nice peaceful animal domino and planting based game called Renature, but the 4 players soon caught on to the area control based victory points and re-wilding the forest got quite cut-throat.

Players start with a bag of dominoes and set of plants (grass, bushes, pine trees, and oak trees) in their own colour or neutral brown. Each turn you place a domino and then have an option on planting next to it, which scores points relative to other plants already in that area. Plant types have increasing values that add up to provide control of the rewilded area, but any ties for control cancel each other out. Only the first 2 untied players score points for the area and if only 1 player is left in control they get both first and second place scores. This means careful use of the neutral plants can switch control of an area. Also unused plants at the end of the game are worth negative points in relation to their size. Finally entirely enclosing an area with dominoes allows the player doing that, even if they have no stake in the area control scoring, to claim a token with a secret number of victory points on the back.

Clouds can be used to change which animal on the domino tiles is wild, recall plants, or have 2 turns in a row, with unused clouds scoring at game end. The players were soon using their plants very strategically to change control of the areas or score lots of planting points, meaning sometimes only a piece of grass was deciding control. By the time all the dominoes are played most of the board and planting areas have been covered. During the final count of area control and the reveal of the secret token points the scoring changed quite dramatically. It is a medium length game with fairly simple rules, but a lot of strategy and back-stabbing as you all regrow and populate the forest. 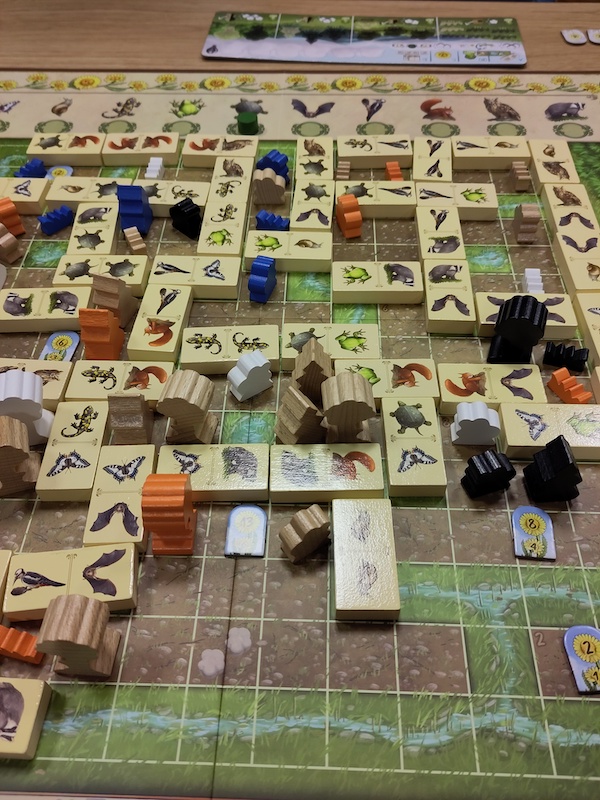 The next 4 player table chose a different theme again, Century: Golem Edition, a card based trade engine building game were the aim is to build up supplies of various gems in order to then purchase victory point cards. A player buying their fifth victory point card triggers the end game and score comparison. 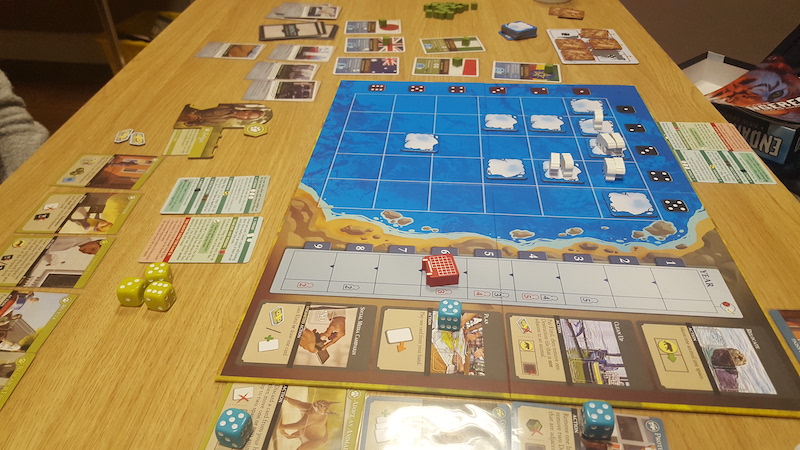 The remaining table of 2 tried to save the Polar Bears (a scenario from the New Species expansion) in a co-op game of Endangered. You and your fellow conservationists have several game years in which to make sure enough animals survive and breed during habitat destruction and impact events, whilst you try to influence at least 4 out of 6 UN ambassadors so that they will vote to protect the animals.

Each player’s turn consists of rolling 3 dice and placing them as workers on the available actions. One of the actions is to play a card from your hand, which can increase the number of action types available, but you have to be careful not to block the other players from using the actions as they have to use higher dice rolls. Next comes the breeding phase where any pairs of animals on the board have a chance to breed, before a destruction phase which usually involves placing destruction tiles like oil or deforestation on the board that can kill the animals. Just before you pick up a card to add to your hand at turn end, you draw an impact event. These impact events can be beneficial such as giving options for rescuing animals, but also often detrimental where more destruction takes place.

Unfortunately, the Zoologist and Wildlife Presenter spent some frantic years trying to save the dwindling ice caps and polar bears but didn’t have enough time to influence enough UN ambassadors before the voting year. It will be good to try this scenario again with some more players. 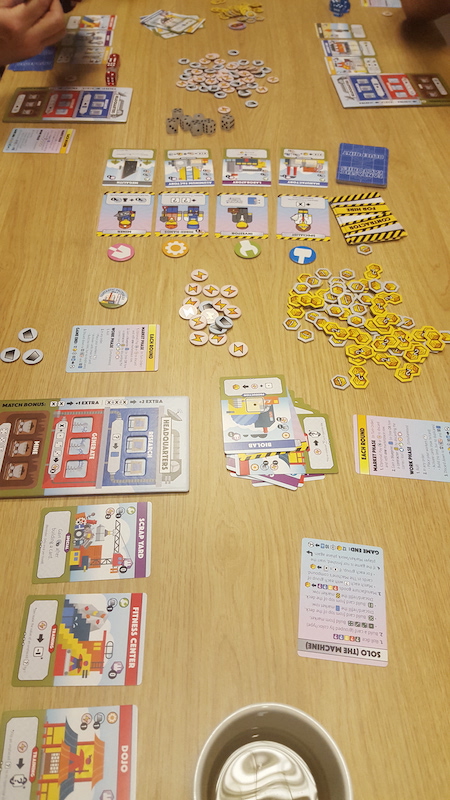 Then there was a slight table reshuffle with a 5-player game of Fantastic Factories starting, with the 2 shorter games mentioned earlier on other tables. In this game the aim is to produce goods and construct prestigious buildings using many different game mechanisms, including dice rolling, worker placement, and card drafting. There is a market phase to buy blueprints or contractors, then a simultaneous building phase where the players dice are workers in their factories and careful play can result in a chain of actions to help optimise the production of goods. End game is triggered when 1 player has 12 goods or 10 buildings.

The next session is Wednesday 25th January, Burns Night! We hope to see you there and welcome people to bring games or suggest games they would like to try in advance then we can organise a table. Contact us via Discord, Twitter or email for more information.