This was a 4 table and 15 player session with all the long games played involving space or growing plants or both. There was a nice range of new games to the club, including a quirky new starter game, and some returning favourites too. 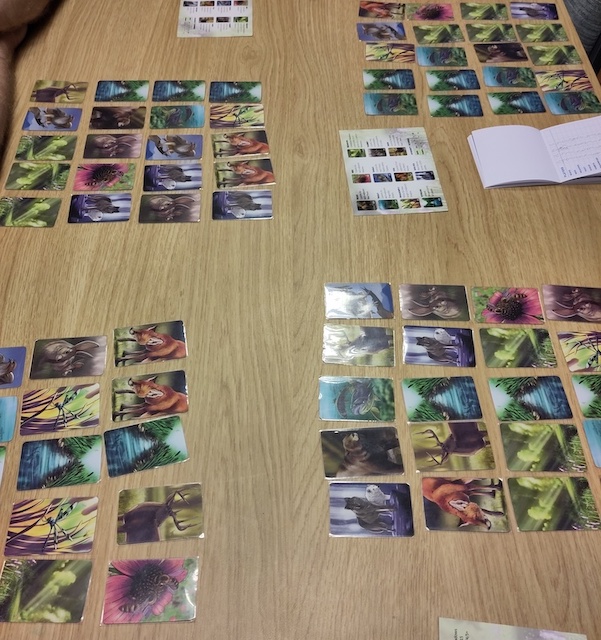 The initial games this session were Ecosystem, so popular that as the first table finished it the next table started it, High Society back for its third play (see blog 39 for a brief gameplay review), and new game Pictures, which is an abstract art and interpretation game. 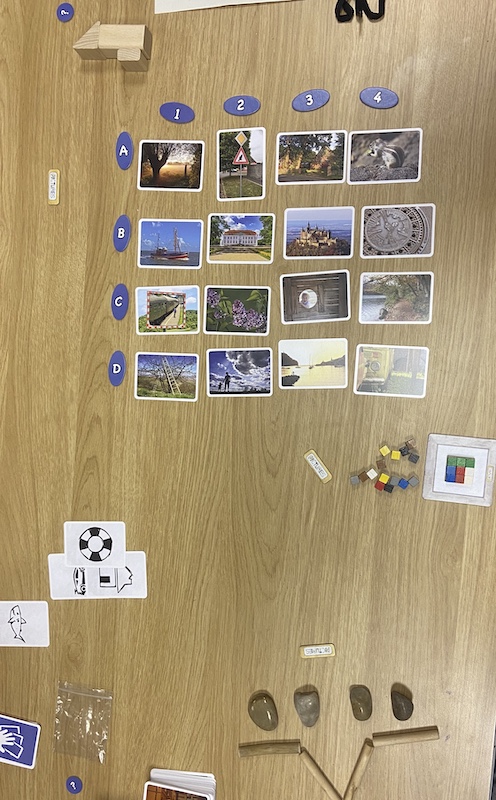 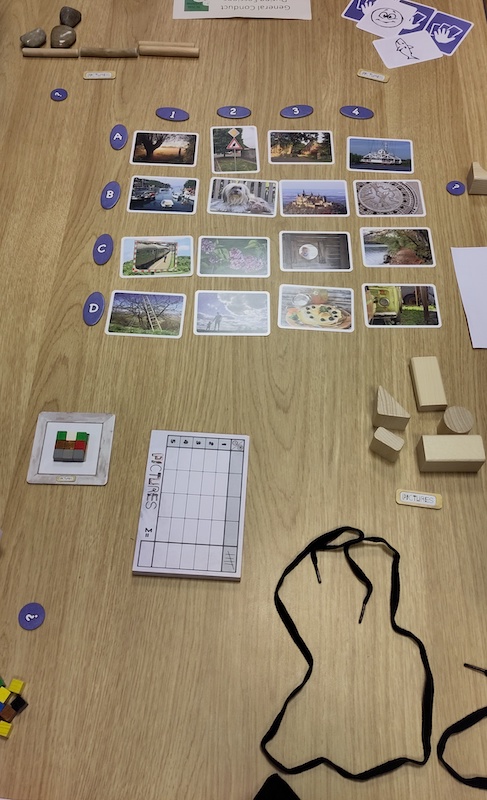 Pictures is played over a series of 5 rounds by up to 5 players. There are 5 types of material with which to artistically interpret a photograph allocated randomly to you from a 4 x 4 grid. Then the other players try to guess which photo you were describing, with guesser and artist gaining a point for each successful guess. Then players switch round the art materials and go again. The 5 materials are 2 shoelaces, a set of pebbles and sticks, some coloured cubes and a 3x3 frame, some wooden blocks, or a small deck of cards with cartoon pictures of which you can use 3. In the end sometimes the players could get on the right wavelength and guess successfully, while other times there was a lot of head scratching about the artists intentions. It was a fun start to the session, a simple but engaging warm up that was also entertaining for the later arrivals to view and have a guess too.

Then the tables all rearranged, surveyed the overflowing table of possibilities, and finally selected Pulsar 2849, Terraforming Mars, CloudAge, and Agricola. 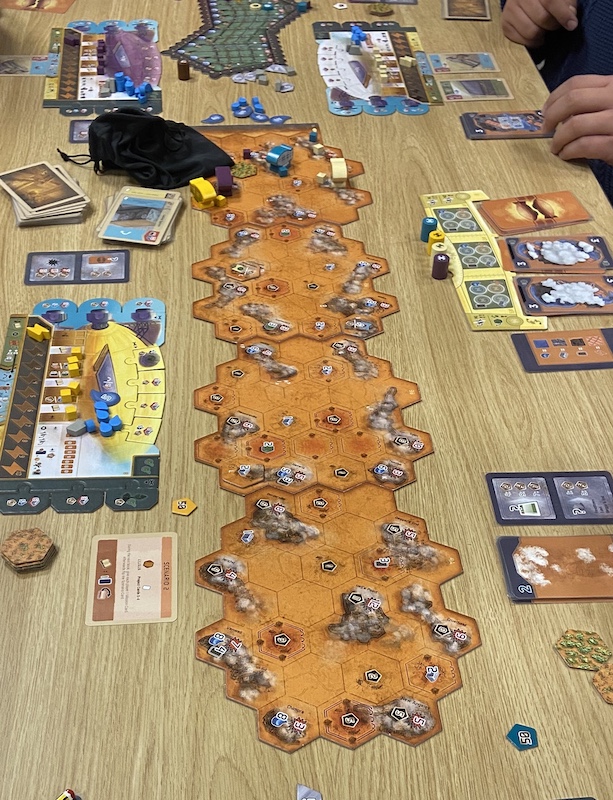 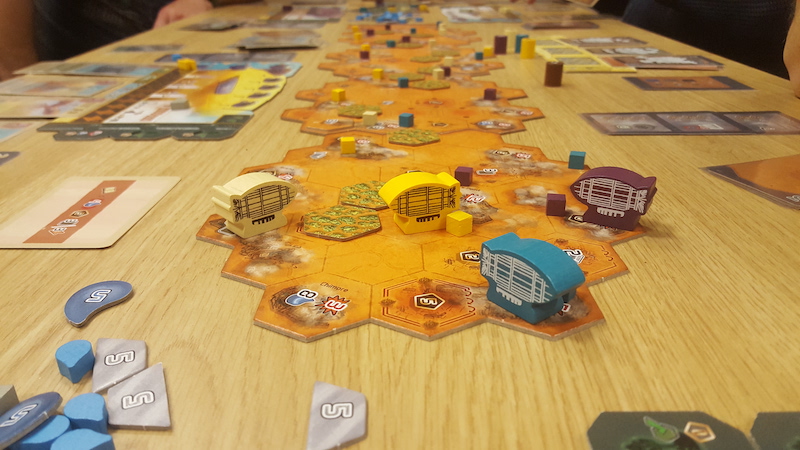 Jeremy J. taught 3 members CloudAge, where players take the role of air ship captains in a future world where the land is too barren to travel across any other way. You are trying to become the most successful by utilising various strategies, from attacking bandits that inhabit the remaining towns, upgrading your airship to even rewilding the world.

The game is played over several rounds comprising mini turns that can mostly be played simultaneously. There is a production phase, where energy is used to create water; a movement phase where you need to travel to the next town and resolve a battle with bandits; and finally a phase where you send out your drone to scavenge resources from the town, improve your airship, or re-wild.

When you send your drone out to collect resources you have to choose one of 4 (water, metal, energy, or project cards), but the twist is due to the clouds above the town you don’t get to clearly see how much is available - this is done by special “cloud” sleeves over the town cards! Apart from getting to keep the town card and adding it to your navigation deck (used to move and fight), one of the other bonuses you may get is to trim your deck and remove low value cards from it - improving your odds later in the game.

To improve your airship you have 2 options, either use metal to upgrade a component, such as adding weapons or engines, or use water to build a project card, which can give you extra resources, battle or movement points, improve your water production, or just victory points. If you choose re-wilding then not all of your new growths will take, if they do you can place them on the board to claim bonuses and victory points, or trade in the wilting growths for resources.

At the end of the game, you add on victory points for all the played project cards, ship upgrades and missions - you get to choose 3 from 4 to try and complete, such as visiting particular towns or playing certain project cards. With 4 players and 3 learners this game was the last to finish, but was quite close in the end with scores ranging from 175 to 140! 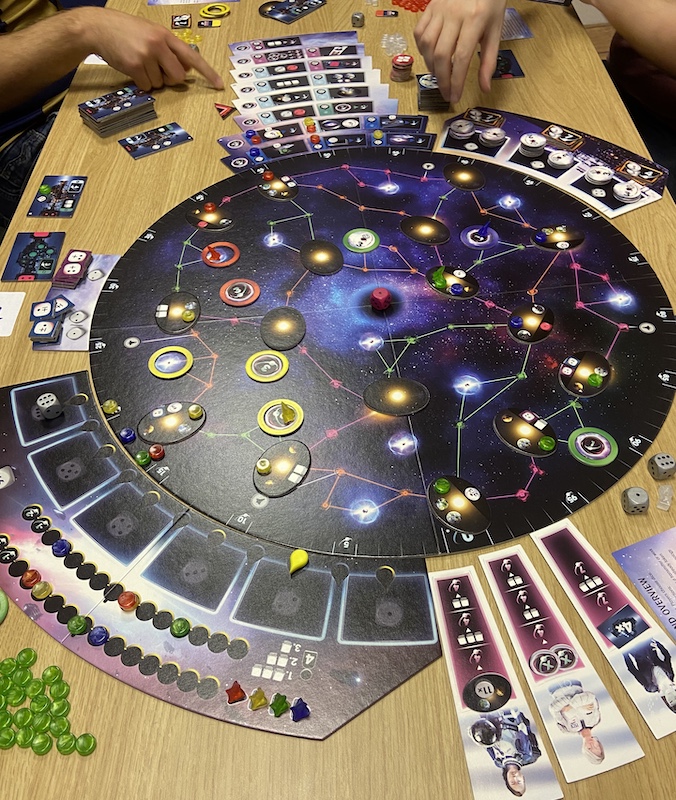 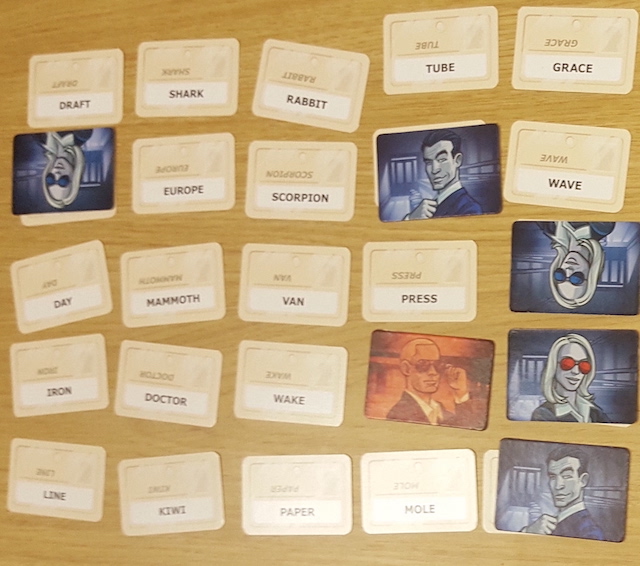 Pulsar 2849 was back from session 26 and had a full table of 4 players sending their scout ships out exploring planets, developing pulsars, or researching, using an interesting dice based mechanic to determine which actions you can use each turn. This was the first long game to finish and the table finished their evening off with a few rounds of Codenames. 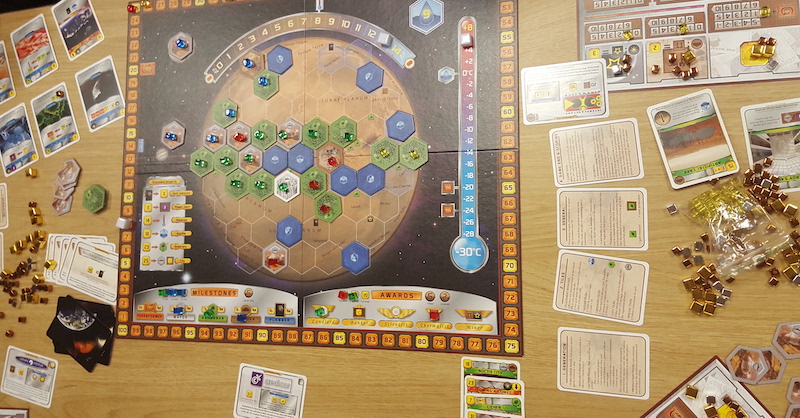 Meanwhile, this was the fourth club play for Terraforming Mars see blog 5 for a game play review. This is a very popular game and there were some new players keen to learn and start colonising the red planet, but it was still quite a close game. 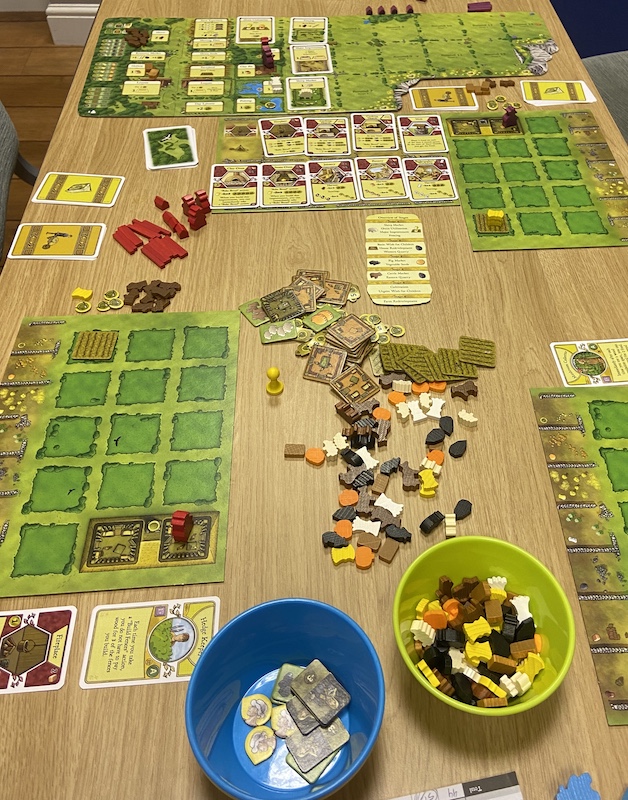 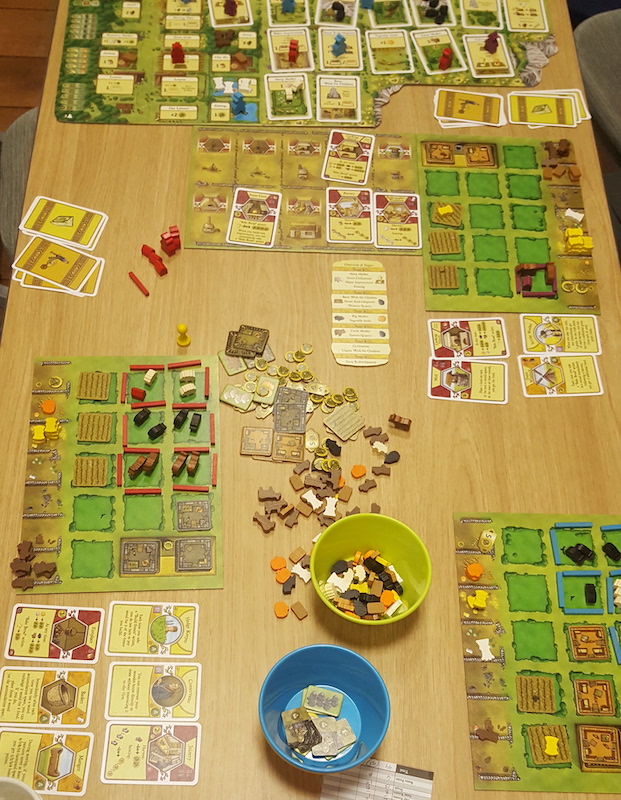 The final 3 players set about learning a classic worker placement game Agricola. There are a set number of turns in order to develop your farmstead. It is a balance of growing and housing your family, where more family members means more action turns, but also requiring more food to feed them each season, which become shorter as the game progresses.

Victory points increase with the amount of each type of resource or development you have, but there are penalties for not having any of each type by the end of the game. So whilst you can specialise in some crops you don’t want to neglect having a variety of each by the end.

There are also occupations and technologies that can be deployed to help. With limited actions available and a competition for many of the action types from your fellow players, it is a very tight game where every decision matters. In the end the teacher won as he was able to generate a full family of 5 workers and keep them fed, while the learners only managed 1 extra family member but got the grasp of the game concepts and had the start of a good crop generating engine going.

The next session on Wednesday 30th November is charity night. Join us for the usual range of games but also a bake sale and a raffle to win a board game. This year we will be supporting 2 local charities: East Anglian Children’s Hospice (EACH) and St Ives Food Bank. Entry to the session is free but charity donations are welcome. Please bring baked goods if you can and be prepared to buy and eat the tasty treats!

There will be no sessions in December due to lower turnout because of Christmas festivities. The club will restart for the New Year on Wednesday 11th January 2023.