This session was shortly after Halloween and so we played a few thematic games. It was also the first time since COVID for an in person role playing game (RPG). Plus there was time for a back-stabbing train game.

The initial games were a little longer this session; Unlock!: Epic Adventures and Three Sisters. Early arrivals were lured into trying an escape room in a box, this time the easiest of the 3 offerings “The Seventh Screening”, a werewolf inspired fun romp through the horror film genre with cheeky nods in the artwork to films like Psycho and The Shining. The premise is simple, the puzzles are all based on cards and a related app. Players find clues or combine card numbers to unlock new cards or solve “machine” puzzles in the app, generally entering codes to open new locations and hence new cards. The team of 6 got stuck a few times but eventually captured the werewolf with a Scooby Doo style trap with 3 and a half minutes to spare. 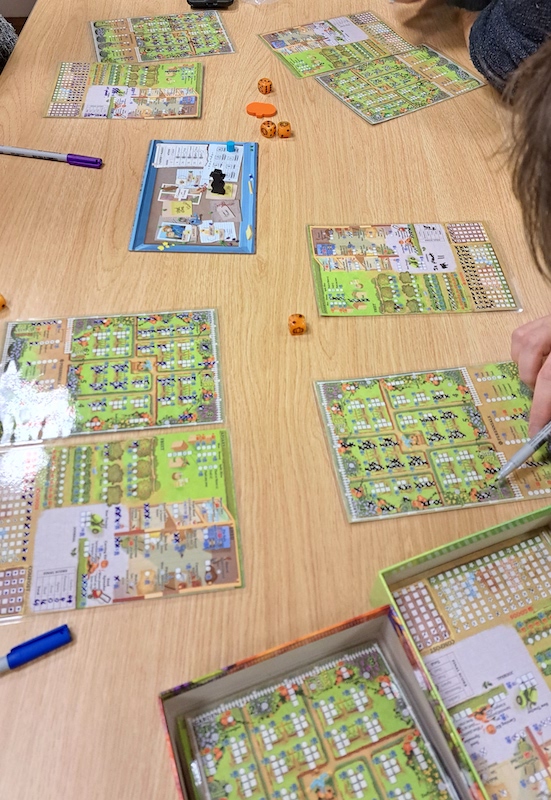 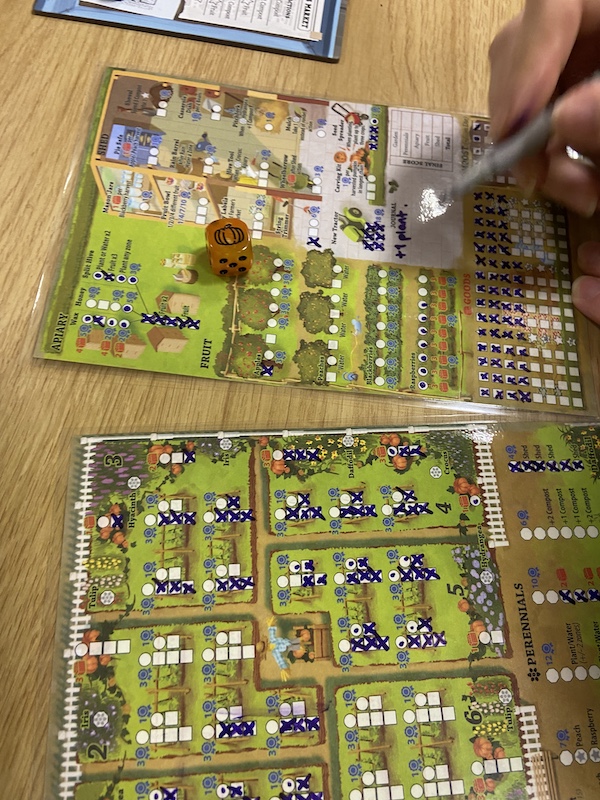 The other table got stuck into growing the best gardens in Three Sisters again but this time testing the new laminated play mats.

Meanwhile, the RPG table setup in the corner trying a one-off adventure as a taster for the Warhammer Fantasy Roleplay 4th Edition system. Find out what happened…

Then the games tables all finished simultaneously, mopped up a couple of later arrivals and split into 2 tables, 6 continuing the Halloween theme with Zombicide and 5 convinced by Simon W. to play one of his train games American Rails. 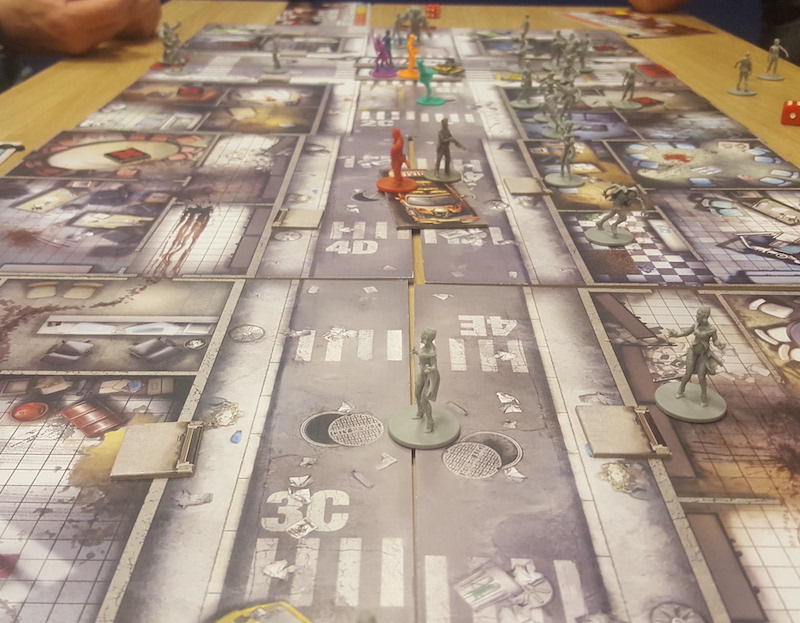 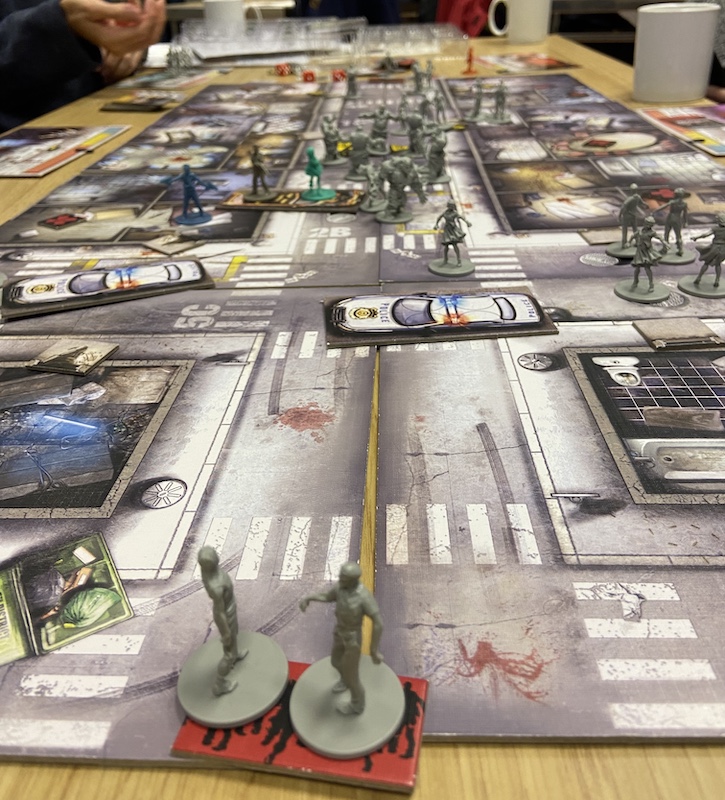 Neil O. and Kathy J. very ably demonstrated how not to start the scenario in Zombicide, obviously as a training first round example. After a board reset, the team tried again more cautiously and things seemed to be going better. Some weaponry had been acquired and the cars were keeping the smaller zombie types under control. The 2 big buildings had been triggered and the zombies inside lured to the end of the board by the noise of the car related antics, and a couple of survivors were poised to enter the now empty buildings and start collecting the scenario objectives.

Then it all went horribly wrong.

The car killing had raised the team level, so now even more and harder zombies spawned each round. The earlier larger zombies hadn’t been killed, which incurred penalties as there were none left in the box for new placements. Then the sewers spawned a wave of zombies too. It was all too much and the team were overwhelmed, it had taken too long to start collecting the objectives. This is a tricky cooperative game balancing keeping the waves of zombies under control but not increasing team level so much the increasing hordes overcome the team before the objectives can be completed. 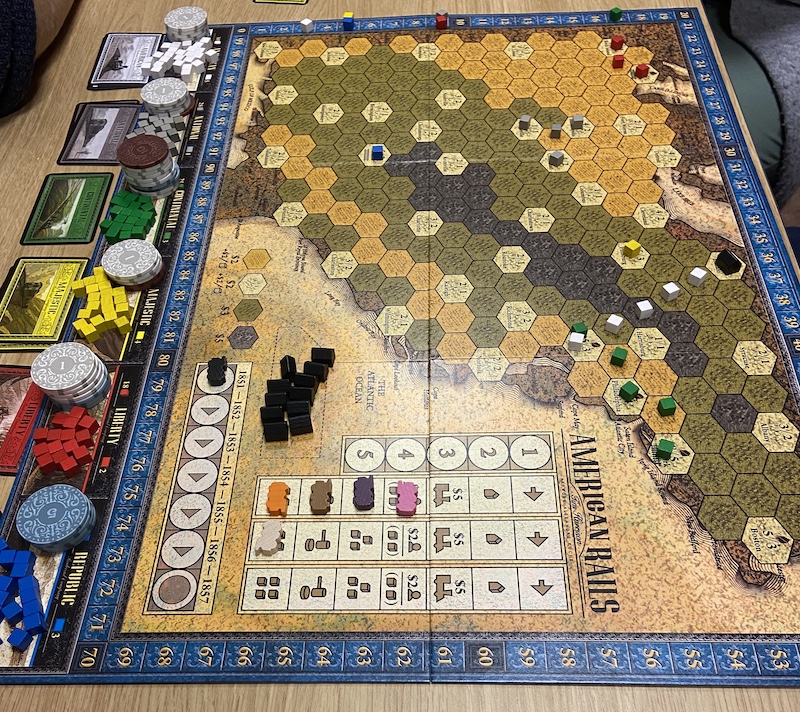 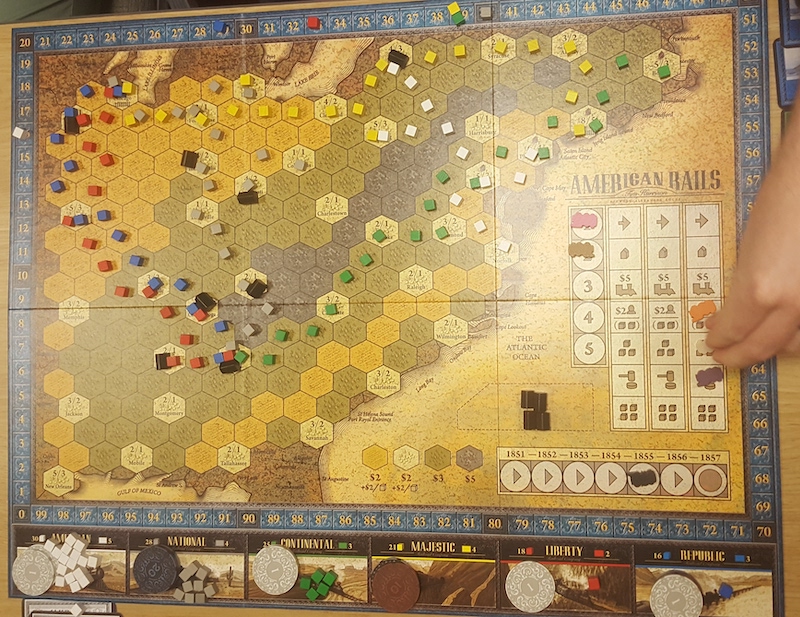 American Rails is another of Simon W.’s stock and trading based train games, similar to Irish Gauge or Mini Rails that have been out in previous sessions. This game is based in the southeastern states of America and introduces a few rule variants to the genre with city dilution and variable set-up and turn order.

We are holding a Charity Night on Wednesday 30th November in 2 sessions time. This session attendees were asked to vote for which charity would be supported, the committee suggested 2 local charities; East Anglian Children’s Hospice (EACH) which we supported last year or the St Ives Food Bank. Both charities got equal votes and so the club has spoken and the money raised on the night will be equally split between both charities. On the 30th the usual on the door (room hire) fee will be waived and we will be accepting donations, running a bake sale (please bring baked goodies!) and hosting a raffle. We hope you will be able to join us and support these worthy charities.

The next session is Wednesday 16th November for the standard fare of spontaneous or pre-booked games. Let us know if you want a game organised or just turn up and see what games are available to join. There will be no sessions in December due to lower turnout because of Christmas festivities and the club will restart for the new year on Wednesday 11th January 2023.