Andy F. set up a one-shot Warhammer Fantasy Roleplay game and 3 players joined him as peasants.

Me and my friends - Vald and Albrecht - were all happy fellows in a small village in the back of nowhere. One day, everybody was helping bring in the harvest, when something interesting happened nearby - well I thought it was interesting - a coach went past into the forest, shortly followed by a loud crash.

I managed to convince Vald and Albrecht to venture into the forest with me (even though they wanted to just finish the harvest). Unfortunately, a tree accosted me tripping me over in the process. Luckily, a fight was going on around the coach so no one paid any attention to the sound of a peasant falling in the woods.

After quite a loud debate on what to do next, with various combatants dying in front of us and 2 women being carried off into the forest, we finally decided to help the nobles in the carriage. Together, I armed with a dagger (using the hilt to concuss), Albrecht with his fists (a well versed village brawler), and Vald with a large rock (he took the liking to) descended on a bandit archer. Through surprise and luck we prevailed in knocking out the archer (who unfortunately perished later due to falling face first in a puddle).

The battle continued around us, but we managed to valiantly help turn the tide. I picked up a bow and sent many an arrow, several hitting their mark, which distracted the bandits for my friends. Vald, after fumbling his rock, picked up a sword and managed to cleave a bandit in twain, whilst Albrecht was warming up to his fist fighting and had managed to deck 2 other bandits.

After some rest and a very respectful word (hat tipping included) with the nobles, we learned of the kidnapping of a merchant lady’s daughter, her hand maid, and 2 boxes that were a dowry.

I then managed to scout the area and work out the bandits were headed to an abandoned guard tower near a river, so off we went with a sort of hazy priority list of objectives from the merchant, not sure if we needed to rescue the daughter first or the dowry.

Arriving in the afternoon, we found the guard tower on the opposite side of the river, connected by a bridge over the river to a broken down building in a compound on our side, guarded by a couple of bandits.

A new discussion between us culminated in watching the place from a nearby hill for a while. We then decided on trying to climb a tree near the bank to access the bridge whilst it was still light (though I wanted to row across using the boat as I detest trees). After a rather loud sneak around the compound, with bird impressions from Vald to relax the guards, all 3 of us were just about to climb the tree when we were nearly seen by a posh lady and a bandit kissing on the tower balcony.

The tree climb was horrible but unexpectedly uneventful. Albrecht jammed the door to the building in the compound and then we made our way to the tower side. There was a guard patrolling inside, but he soon went to sit down, so we slipped inside to a disused room. Across the way we heard women’s voices, and out the back of the room we found stairs up to the top of the tower and a store room with a rope and some bandit cloaks. We suddenly had an inspired idea to don disguises, though some may say we had an opportunity back at the battle, this seemed like a more apt time!

As bandits we made our way carefully to the top of the tower to find a table with both chests and a long curtain dividing the room. Huddling in a darkened corner we managed to gesticulate wildly for a few minutes until I got the message to go to the balcony and secure the rope. Vald followed with one of the boxes and reluctantly Albrecht picked up the other and joined us. We then argued on the balcony about whether or not we should rescue the women, nearly alerting the occupants behind the curtain. In then end we secured the boxes to the rope and lowered them with me and Vald going after.

Albrecht had other plans! Unbeknownst to Vald and I, he set a flame to the curtain using a handy torch in the room. He then went down the rope to find us both waiting. I cut the rope (in half) and we made our way with the goods back to the other side and lowered them down. Again Albrecht had other plans, as the call of “Fire!” from the tower made the guards rush up to help and he could then enter the tower. Whilst he was away, suddenly the door on our side to the compound rattled and we had to bar the way.

Vald held the door as best he could, but in the end, he signalled they were coming so, using a shield Vald had collected from the previous battle, I braced myself to charge them and push them off the bridge. Alas, I misjudged the timing and threw myself into that hateful tree missing the bandits entirely.

About this time, Albrecht after some sly deception to a female bandit about coming to help, exited the tower with the hand maiden, only to find Vald in combat with 2 bandits after jamming the door again. Albrecht rushed to help and both of them managed to fight them off (1 of the bandits jumped into the river!).

Meanwhile, I had got the boxes into the boat, and that’s when the handmaid badly fell out of the tree (told you they were beastly things), closely followed by my gallant friends - both worse for wear. We all piled into the boat and with some skilful rowing on my part (nobody fell in!) we made an exit.

We then found ourselves with a broken box full of gold coins, and decided that having failed to retrieve the daughter, we might as well share the loot and start new lives! 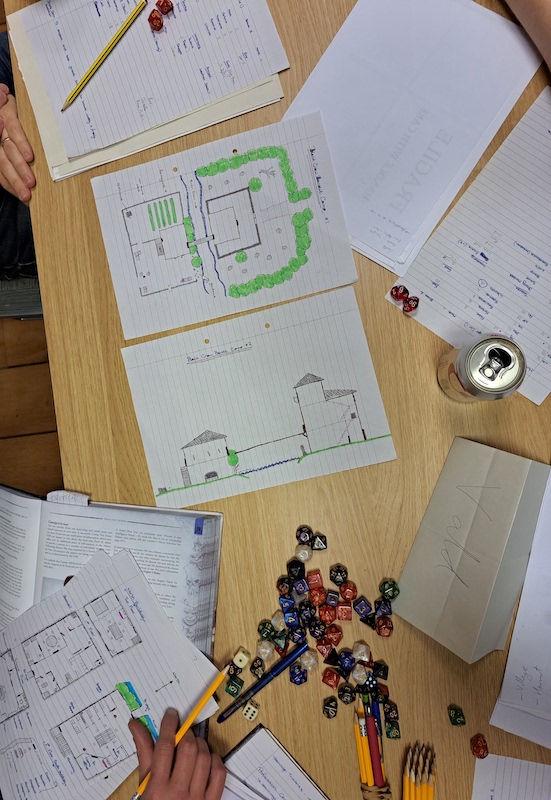 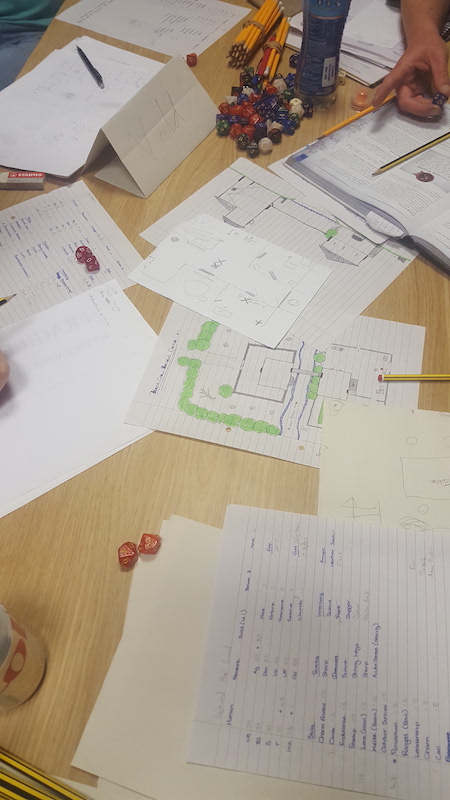