Twenty Seventh Session - All the Z’s

We had 14 gamers this session, including 1 new joiner, which let us play 2 long games with a Z theme (Zombies and Zimbabwe) and the final table giving Everdell its fifth outing.

Initial games included a previous pick of Seven Dragons back from Session 18 and 2 new games, Coloretto and Love Letter with the Adventure Time theme.

Love Letter is a simple social deduction game. There are 8 role cards, but different numbers of each in the pack. You start with 1 card and pick up a new card each turn, then discard 1 activating its associated action to try and eliminate other players from the round. Either the last person in or with the highest value role card when the draw pile runs out wins the round and gets a favour from the Princess. The first with 4 favours wins. We played the Adventure Time version with 4 players, with cards updated to include characters from the cartoon and a couple of rule changes compared to the original to match the theme.

Another table tried 3-player Coloretto, which is a push your luck set collecting game. The pack is setup to include cards of various colour sets depending on how many players there are. You score depending on how many cards in 3 colour sets you have collected. If you collect any additional colours these count negatively at the end. There is 1 row setup per player, and each round you pick up a card from the deck and play it onto a row to a limit of 3 cards per row, or pick up cards from a row, which closes it. Do you pick up before too many cards are played of colours you aren’t collecting, or stay in and hope to pick up wildcards or more of the colours you are collecting?

Seven Dragons is another card game, this time playing them to a tableau trying to make a chain of 7 dragon pictures in your secret goal colour, or using special cards to move cards around the table or change goals with other players. It is a simple concept and pretty quick to play, so we managed 3 rounds before it was time for the long games to start.

Back again for a fifth session in a row was Everdell, with 3 returning players teaching 1 new player. The table was soon deploying critters and building those woodland cities around the Ever Tree. 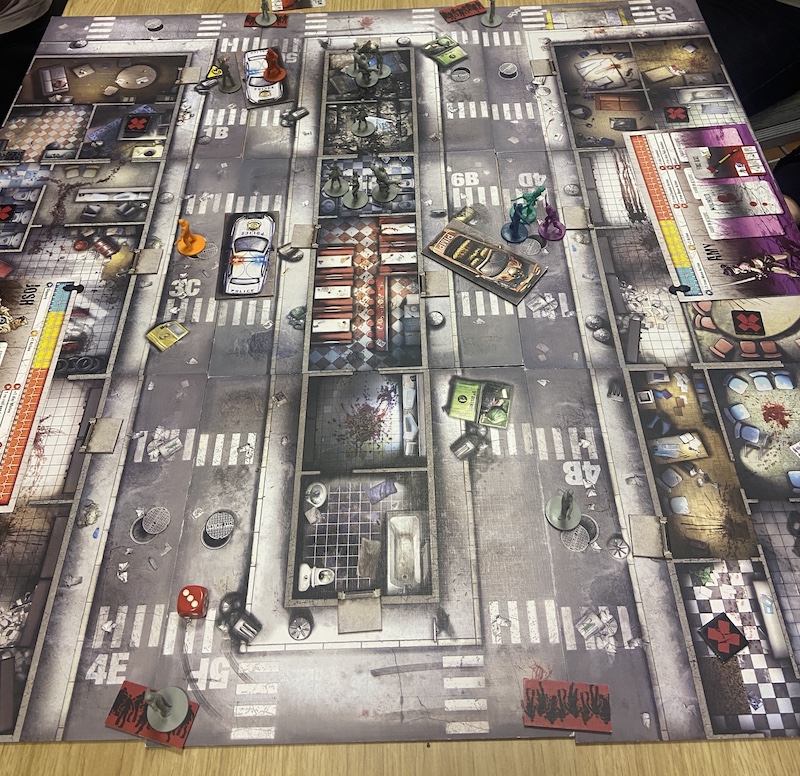 Neil O. set up a 6-player game of Zombicide. This is a cooperative game to survive waves of zombies spawning each round. The game comes with a variety of missions with different board setups and goals. We played a setup where the goal was for 1 player to reach the maximum skill level of 43 (you gain 1 level per zombie killed). The problem is as players gain levels and pass thresholds this increases the difficulty of new zombies spawned. The highest player level sets the zombie spawn level, and so focusing on a single player gaining experience then means the others are underpowered to deal with the increased number of zombies. 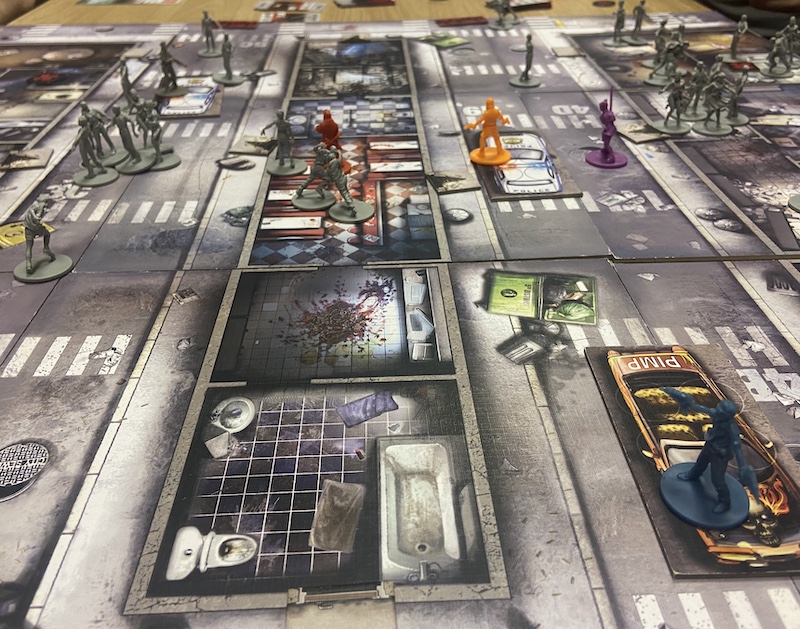 There was one early fatality when a couple of players had become separated from the others and were overrun by the new spawns. The rest held on for a few more rounds finding better weapons and in the end agreed a risky strategy of opening up a new building spawning many new zombies. This provided plenty of zombies to kill and rack up the levels, but more zombies to cause problems if the dice rolls went wrong. Finally, the end of round spawn meant almost all the available zombie miniatures had been deployed and a horde overran 3 players at once, but luckily the remaining 2 now had the opportunity to plough through the horde on the street in a police car achieving the goal just in time. 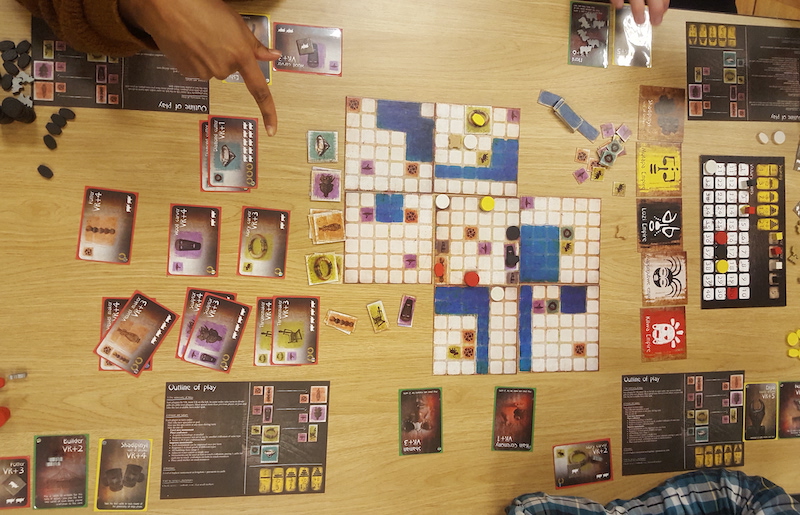 A new milestone for the club, the first game by the niche (even within gaming) publisher Splotter. we had 4 players sitting down to play The Great Zimbabwe, a logistics and economics game set in the Great Zimbabwe World Heritage site, of which the ultimate aim is to build monuments to your chosen god. There are a lot of options and factors to balance to decide the overall winner, and cute gold and silver cow tokens as currency. The game has a very interesting bid for turn order, where the bids are distributed among the players - so you can go first, but you give cows to your opponents. The most fascinating idea in TGZ is how you win. You need to reach a required number of victory points, but this can be different for each player as players gain benefits/advantages and these increase the total they need to reach. This is the cow game you need to play, except the other cow game you also must play that is entirely different (6 Nimmit). 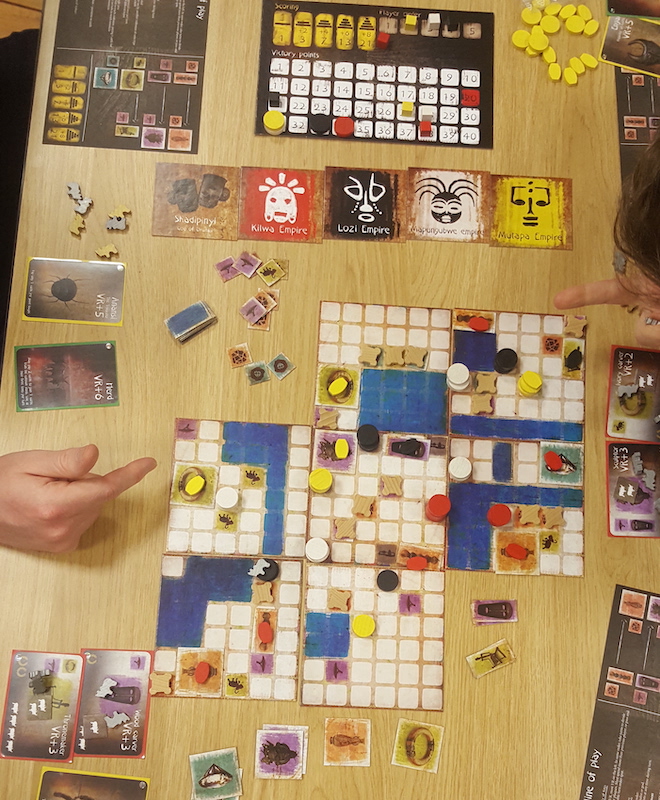 The Everdell table finished first and managed a game of returning favourite - Ecosystem - before the night ended.

Do let us know about games you would like to play in future sessions, either from your own collection if you are willing to teach others, or one you have seen played in previous sessions and we will try and bring them along and matchmake some tables in advance.