It was a quiet first session for 2022, but not surprising with high levels of that virus still circulating. However, the 9 gamers attending had a fun evening. The only commonality I could come up with about the games played was their diversity; in topic (space, nature, history) and play mechanics (flip and write, pick, pass and play, or area control, and conspiracy).

Kathy J. started by teaching Welcome to the Moon for a 5 person table. The original Welcome To… game had been a staple during our virtual Board Game Arena nights due to its scalability (1-99 players) and relative simplicity (See interim session blog).

All players fill numbers into their boards each turn, these are generated from a pack of cards setup to provide 3 pairs of cards to select from each round, so all players have the same options throughout the game. One of the cards shows one of 6 symbols which can limit where on the board you can place the associated number or provides strategy for scoring. The other card in the pair has a number from 1 to 15, these need to be placed following an ascending order rule but gaps are allowed and numbers can be placed in any order (i.e. then 7 then a 2 then a 12) providing the placement follows the ascending rule compared to all previous numbers placed. The difference in the moon version is the box contains 8 games in one, with sets of 6 wipeable boards with different setups to place the numbers and subtle changes and increasing complexity on the placements and actions associated with the symbol cards as you try the later missions. 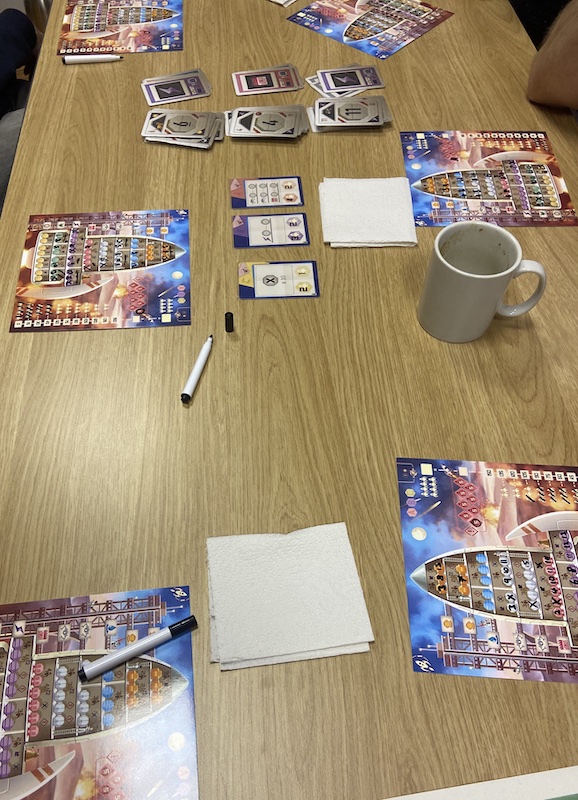 This session we played board (mission) 1 twice, so players grasped the mechanics of the game, then tried mission 2 once. Mission 1 is a race to fill your rocket and blast off, while mission 2 is the journey through space to reach the moon. In future sessions we may get to building the colony. When players are familiar with the rules each game take about 20 minutes, so hopefully this game will become another club favourite at the start or end of the session, or people will want to try the campaign and follow the sequence of boards and the unfolding story of the Moon colony. 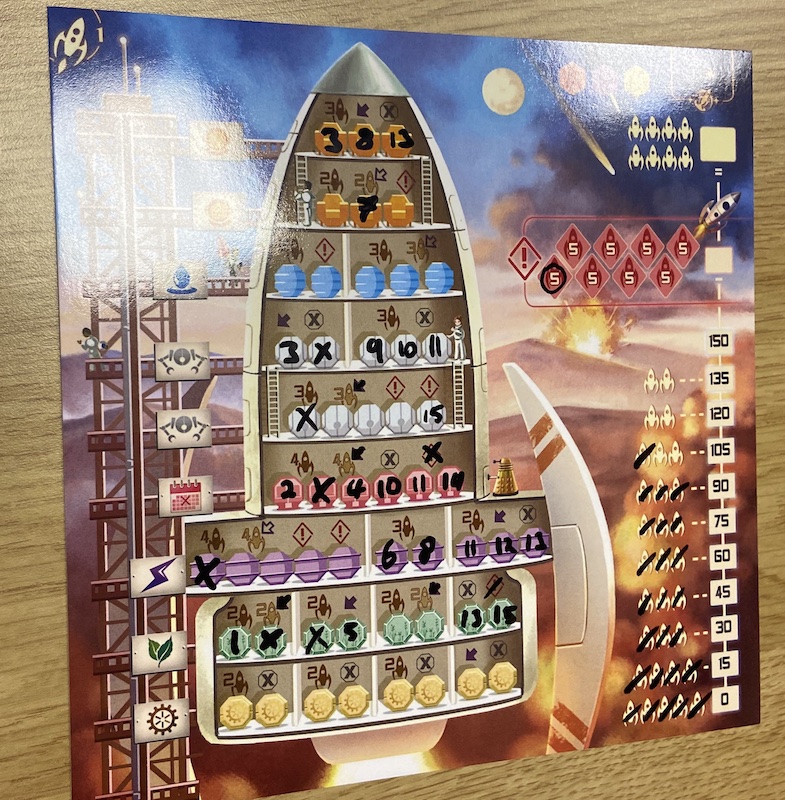 After all this number placement fun, the table swapped to 2 games of Ecosystem (see session 13) for some animal placement instead. A different mechanic and scoring style with the relative locations of different animal and habitat cards generating the final scores but, as per the nights theme, diversity also plays a key role in scoring.

Nathan brought along Pax Pamir and the other table started a 4-player game. Here players take on the roles of Afghan tribal leaders in the 19th Century, dealing with the influences of the British and Russian empires. It is a game of politics, economics, negotiation, back-stabbing, and area control set in the Pamir mountains. The key mechanics are hand management and area control. 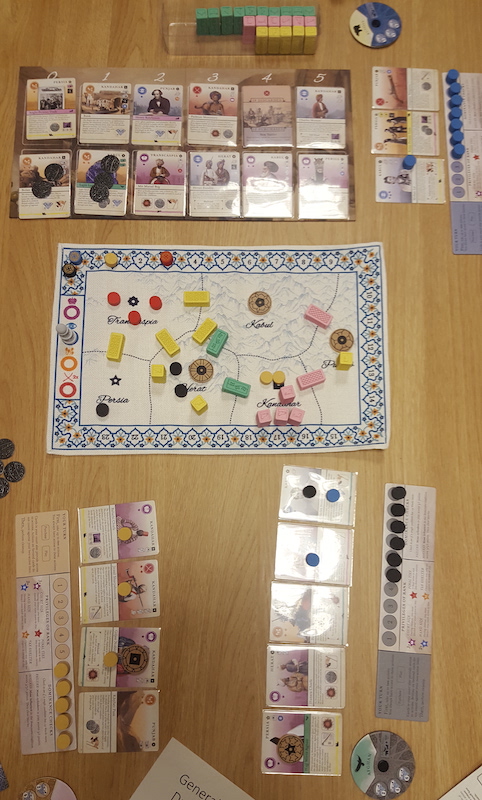 The game has a map of Afghanistan that is split into regions, and is where you can place tribal villages to gain control. There are also the 3 factions - Afghan, Russian and British - and you can create armies in regions or build roads between regions (to allow armies to move) via playing cards or using card actions. There is a card market that fills with people and places that provide control and actions in these regions, such as placing roads, or a region leader than allows you to control that region if you have majority. You place these cards in your court to activate them. Some cards allow you to create spies that can be moved onto other players court cards and then make them expensive to use or even assassinate them. You start the game allied to one of the factions, which dictates the armies you place, and then during the game, depending on the cards you play, or sometimes the assassinations you do, you can change faction which can be very important for gaining points!

The key aim of the game is scoring points during dominance checking rounds - these happen when they are activated in the games card market, they appear at semi-random points during the game from a curated deck (similar to epidemics in Pandemic). The scoring can happen in two ways, depending on whether one of the factions is dominant, which means you can go from being in a scoring position to not depending on how many faction pieces are on the map. 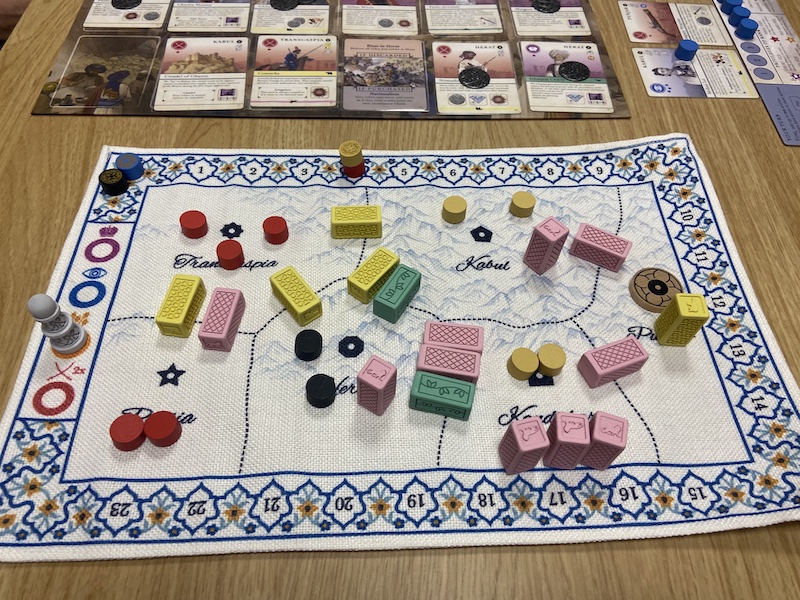 This session’s game started with 2 players being allied to the Russians, and 1 player each for Afghans and British. So the Russians gained ground, but not dominance, with everyone focussed on controlling areas. But then two-thirds of the way through 2 players switched to British and that faction became dominant, so that now bounties (assassinations) and gifts were the only ways to score - but only if you were in the dominant faction! It ended up with all players changing allegiance to British, but it was finally won by Josh who had started out British and had used his spies to collect bounties and his money to buy gifts. 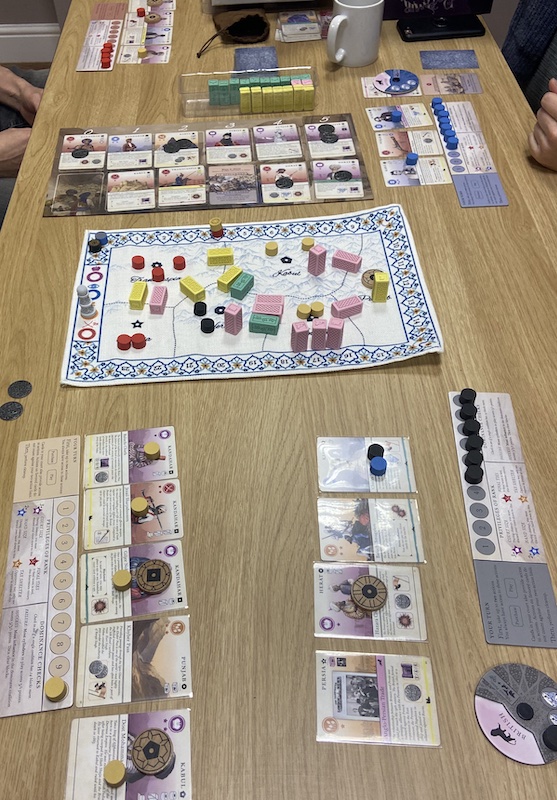 It is a brilliantly presented game, with a lovely play mat and well-crafted blocks representing armies or roads. It has many interesting mechanics that are reasonably simple, but the interplay makes for different opportunities and strategies, so it is likely to make another outing!

It was nice to see some of our regulars and do some face-to-face gaming after the longer break between sessions over Christmas. The next session will be January 26th.