This session was our annual charity night raising money for two local charities, East Anglia’s Children’s Hospices (EACH) and St Ives Food Bank with donations, a bake sale and a raffle. Eighteen gamers turned up to support us and there was the usual varied selection of games running across 3 tables with the long games featuring either Ancient Rome or Egypt.

Many thanks to everyone baking goodies, there was a nice array of cakes and biscuits and many calories were consumed. Sophie FW. won the raffle and chose Burgle Bros. as her prize. When all was counted up a grand total of £200 was raised which will be split equally between the charities.

The short games this session were all new to the club; Patchwork Doodle, Subastral and Mapmaker: The Gerrymandering Game. 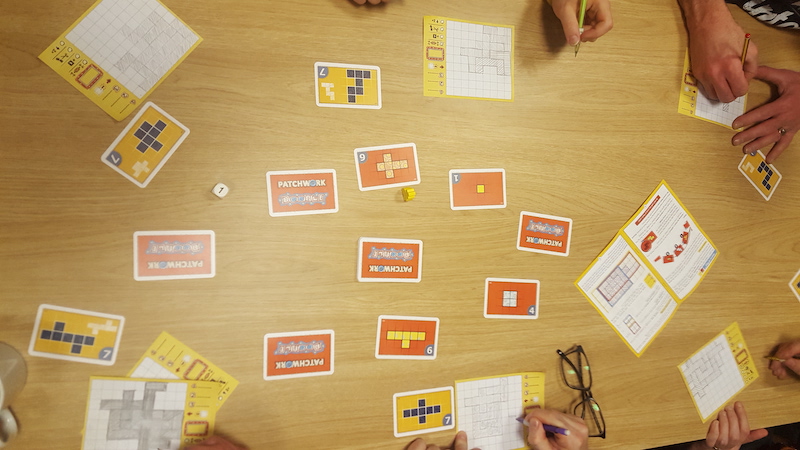 Patchwork Doodle is a roll and draw version of a popular 2-player game Patchwork, a tetris style competition to fill in a grid. In this version multiple players (we had 4 and then 6 play) start with 1 unique piece to put anywhere in their grid and then there are 3 rounds with 8 pieces on display with a dice roll determining which 6 will be used by all players. There are 4 special actions: select a different piece from either side of the one chosen by the dice, fill in a single square, cut the piece and use one half, or repeat one of those 3 actions.

Scores are counted at the end of each round based on the biggest rectangle that is completely filled and at the end of game deducted for empty spaces. The first game was very close and the second the scores a little more spread out as some players had used their special actions up early and were caught unable to fit the final pieces into the grid. It was simple to explain, scaled to let lots of people join in, and was a lightweight but enjoyable start to the evening. 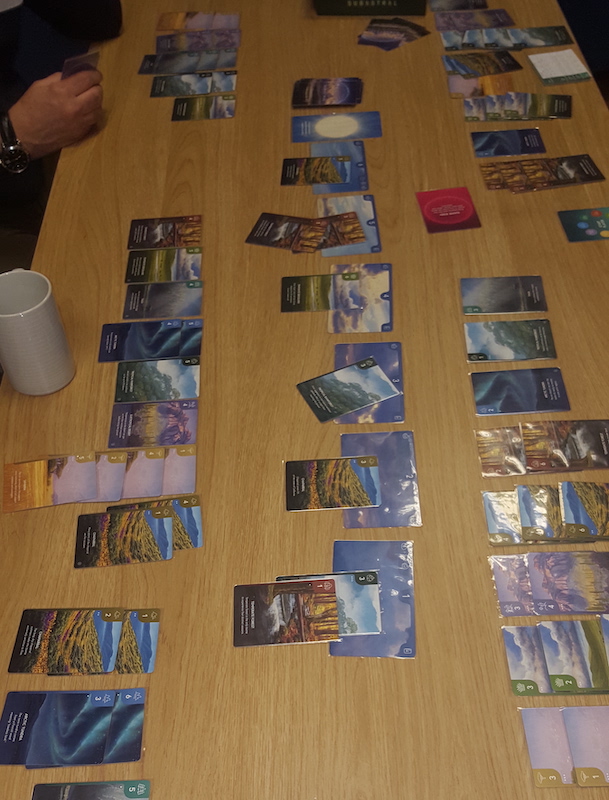 Subastral is a reimplementation of the 2-player game Stellar, a card game creating a beautiful map of the night sky. Subastral is about researching the biomes of planet Earth and creating a journal about them. It requires careful card management to balance cards in your hand against those committed to the journal so you can continue to pick up new cards from the display. The journal is scored based on diversity of biomes collected and the two biomes you are most knowledgeable about, with the catch being there is a multiplier based on their position in the journal. This means the biomes you place last will likely be worth the most points and o there is a strategy to acquiring and placing cards before end game is triggered. 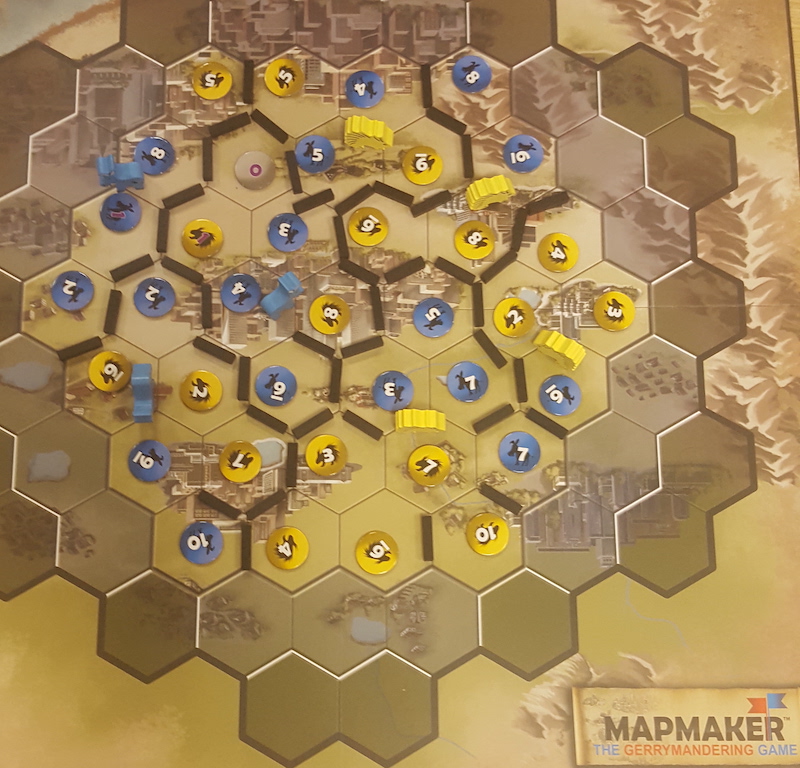 The Mapmaker game is a simple area control game loosely themed on Gerrymandering - creating electoral boundaries to increase your chance of winning the election. A hexagonal grid is randomly populated with tokens for each party of varying count. Players then take turns adding sticks along the boundaries to enclose a minimum of 4 hexagons, with the smallest viable size then counted based on the tokens inside. Whoever can rig the boundaries so they get the most scored areas when all valid areas are closed wins. 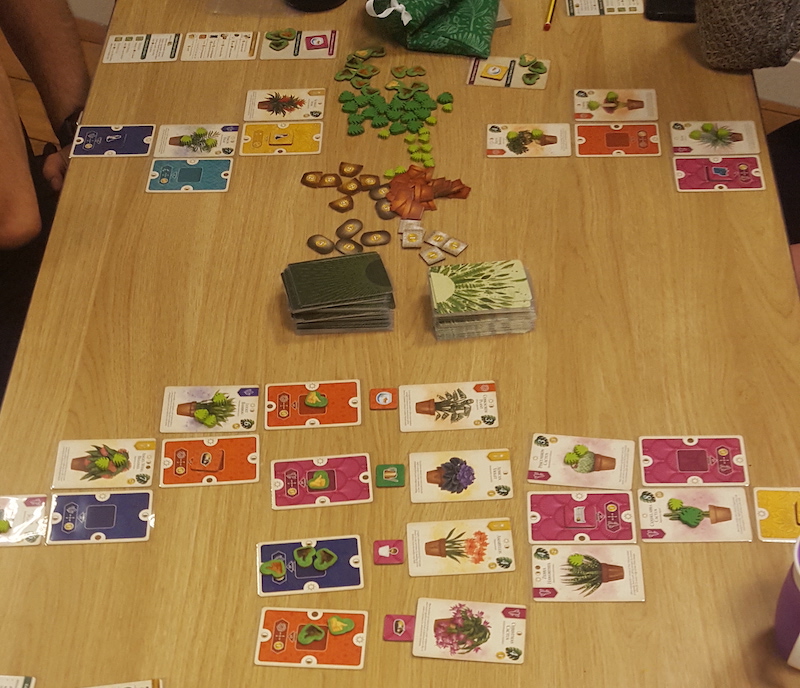 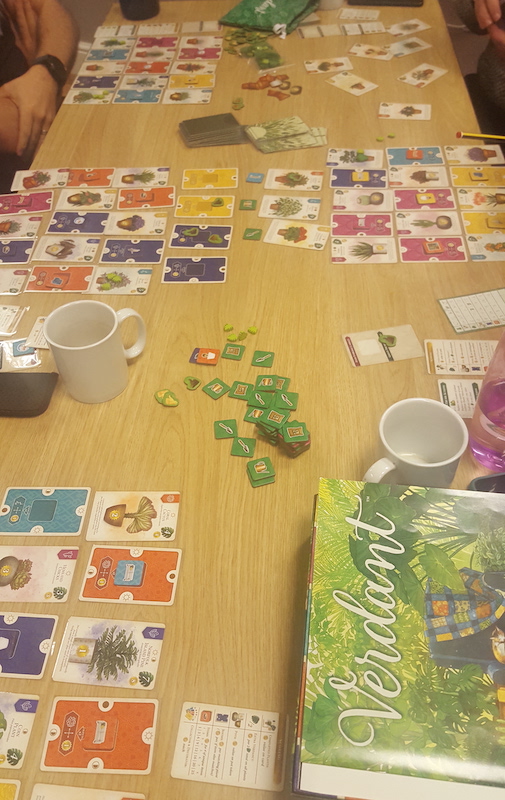 The final table started a medium length game Verdant, which is a spatial card game about collecting houseplants and arranging them in your home. You must position your plants so that they are provided the most suitable light conditions and take care of them to create the most verdant collection. This is achieved by selecting an adjacent pair of a card and token to put in your tableau with adjacency increasing verdancy and tokens providing bonuses, such as fertiliser or watering. 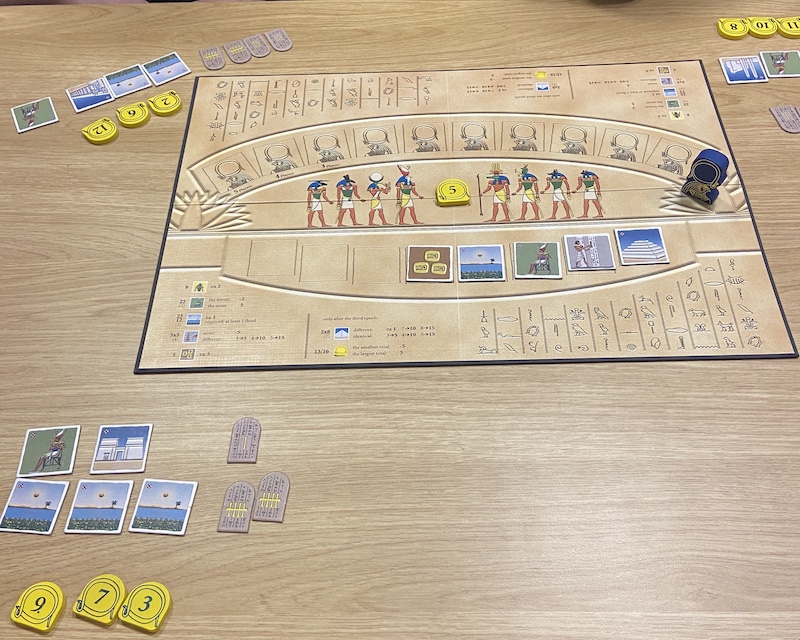 Once this was finished a new game was set up - Ra. This game is played over 3 epochs with auctions of tiles occurring when either the god Ra commands it (a Ra tile is drawn) or a player decides to call an auction. Whenever an auction is started, the gods name Ra must be forcefully invoked by “slamming” the Ra token on the table! Then starting with the next player, players bid with one of their sun tokens that each have different values on. Whom ever bids the highest sun token wins the auction and all the tiles and swaps their sun token for the 1 in the middle - hence you must also consider what value from the previous auction is left as that will be one of your sun tokens for the next epoch.

At the end of each epoch victory points, or Ankhs, are awarded for having various sets of tiles, such as Nile tiles with at least one flood, but you can also get negative points for not having certain tiles, such as civilisation tiles. Certain tiles, like flood or civilisation tiles, are thrown away per epoch and so are transient for scoring and need to be gained again in the next epoch. Other tiles - monuments - are collected each epoch, but are only scored for on the last epoch.

Everybody had fun launching off the auctions in their own Ra style, and in the end it was quite a close run game to see who would win trying to get the best combination of monuments. 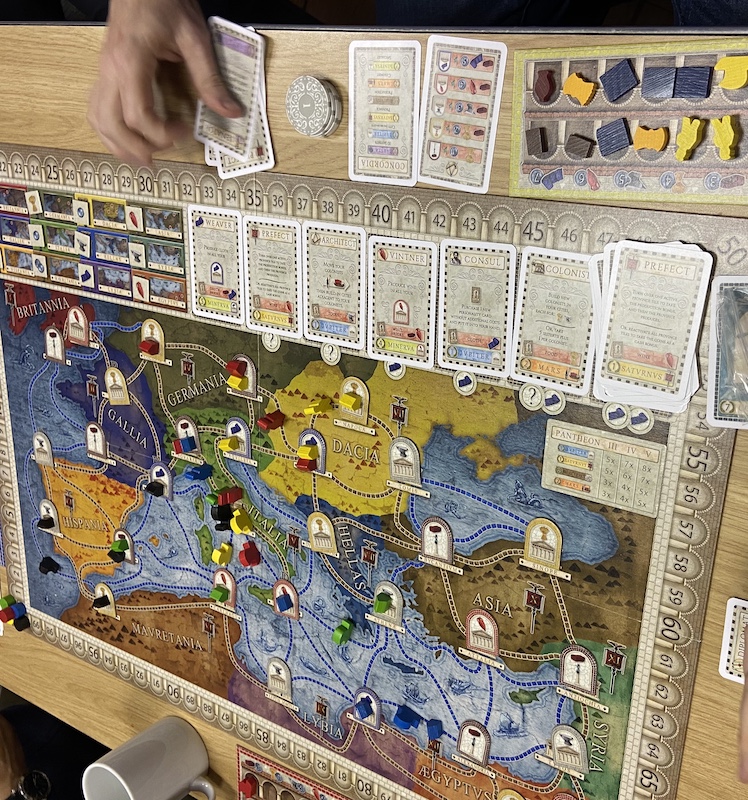 The other 2 tables had a bit of a player shuffle and then got started on returning favourite Roman games Concordia in its fifth session played and Colosseum. Colosseum was a 5-way battle to become greatest Roman showman with Graham W. taking an early lead with best show in the first 2 rounds, but then Andy F. surged into the lead after he put on the “Circus Maximus” spectacle in round 3. James W. followed this up by attracting many important spectators to his fourth show “Mare Speilbergus” to switch the lead yet again. However, in the final round it was between Kathy J. and Graham W. who were able to put on large shows with “And Tellus Created the Earth” narrowly beating “Venus’ Equestrian Cavalcade”. Much fun was had with some cut-throat auction tactics, haggling to trade performers, and some great descriptions of the epic performances and tragic accidents occurring.

There will be no sessions in December due to an expected lower turnout because of Christmas festivities and so we hope to see everyone back in the New Year when the club restarts on Wednesday January 11th 2023. Do let us know if there are any games you particularly want to play so we can bring them along or pre-book some tables with other players.